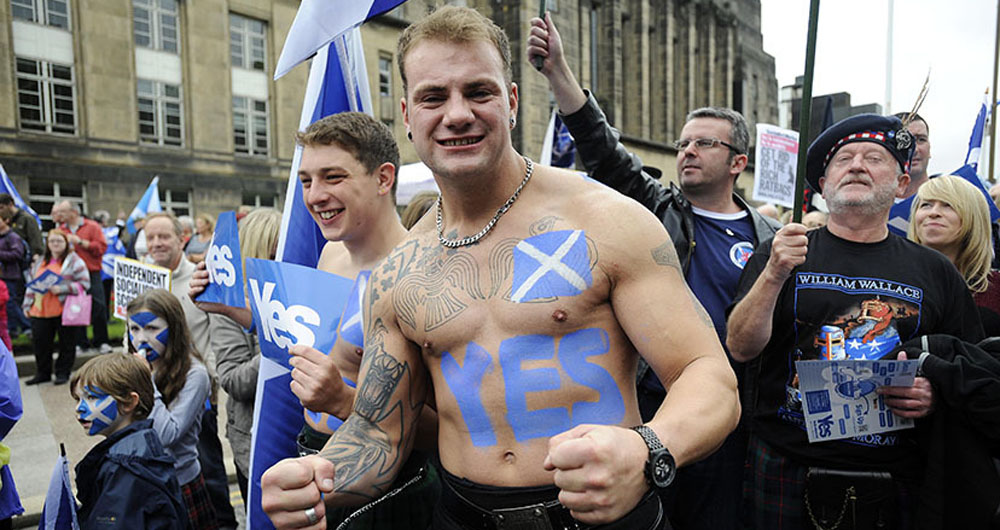 There are so many will they/won’t they news stories to argue over this week, it’s like you don’t even need a casino in Massachusetts, because you could place your bets on the bottle bill, Scotland’s independence vote, the governor’s race and you could start a pool for how many more oopsies Joe Biden will make by Sunday. No idea what any of that means? That’s OK! We’ll give you the rundown before you crawl out from your rock and hit the bars this weekend … but you have to decide on the odds yourself.

Joe Biden put his foot in his mouth three times in 24 hours, managing to suggest we’ll deploy ground troops to Iraq, and pissing off both Jews and Asians. It’s campaign season and he’s a busy man, but even for Biden, this many gaffes has got to be a new record.

Researchers believe that the artificial sweeteners found in diet sodas and your grandma’s house might be triggering pre-diabetes blood sugar levels, probably because they’re hurting the cosmos of bacteria in your belly. In other words: your sugar-free diet could kill you. Order yourself a sugary cosmopolitan! You’re screwed either way, so you might as well enjoy yourself.

Suffolk Downs loses its casino bid, meaning the racetrack will close and we’ll all have even less reason to visit Revere. (Unless you live there, in which case: Revere forever!)

Scotland votes on independence. Here’s the gay hookup community’s take on the matter.

President Barack Obama’s plan to train and equip Syrian rebels made the House go topsy-turvy on Wednesday, with Republicans supporting the president more than his own party, and Nancy Pelosi looking downright hawkish. It’s like a bizarro version of 2003 all over again. No one could have predicted that spread!

Four New Englanders have received MacArthur “genius” grants, including cartoonist Alison Bechdel. This should surprise no one familiar with the region’s intellectual heft and bulging big brains, but it’s a good reminder to hedge your bets at the bar tonight by saying, “I’m not a certified genius or anything, but …” You never know who will be sitting next to you at the bar.

The state ballot will include an environmentalism-supported expansion of the state’s recycling policy, which would add a five-cent deposit to water, juice, and soda bottles. The opposition campaign has funded a one-minute television spot that argues, “if you don’t return your used containers to the store — politicians get to keep your money.” And while this does conjure an interesting image of Senate President Therese Murray rifling through your recycling bins, bottle bill advocates say it’s not entirely accurate—unreturned deposits would bolster the state’s general fund and help balance the annual budget. Fun new drinking game: As a group, try to get your potential bottle deposit refund to $1. At the end of the night, gather as many empties as you can, and announce “I’ll be taking these. Because I love … [hiccup] the environment!”

Another local boy doing us proud (sarcasm): 26-year-old homeless “Joe,” who got kicked out of his mother’s home in Boston and onto the streets of New York, has a morning Four Loco habit, makes $150 a day panhandling, and freshens up by having sex with lots of women. Or as he so charmingly puts it, “It’s not like I forgot how to get pussy just because I fucking became homeless.” Because ladies really love it when you address them by their genitalia, we recommend that anyone who thinks this video is glorious address a group of women as “Hey, pussies!” and see how that goes.

While many have called out Davis since a video of her refusing to issue a marriage license to Rowan County residents David Moore and David Ermold went viral in July, relationship columnist and gay activist Dan Savage went a step further on MSNBC Tuesday night, saying that “this is about someone hypocritcally looking to cash in”. He added: “And she is a hypocrite.” END_OF_DOCUMENT_TOKEN_TO_BE_REPLACED

END_OF_DOCUMENT_TOKEN_TO_BE_REPLACED

David Filipov was part of the team that headed up the Boston Globe/Fox25 Olympic Debate last night. He offered his takeaways and analysis after an update on the latest exchange between Governor Baker and the USOC. All in all, our conversation does a pretty good job of getting you up-to-speed on all things Boston2024. END_OF_DOCUMENT_TOKEN_TO_BE_REPLACED

END_OF_DOCUMENT_TOKEN_TO_BE_REPLACED

I’m in my mid-twenties, and I’ve been working as a substitute teacher for the last couple years (I joined Teach for America right out of college). I know some of the girls in classes I teach have crushes on me — high schoolers aren’t very subtle — but I brush it off, because I’m not an idiot. Last week, however, I got a disturbing email from a girl in the English class I subbed for. Pictures were attached. You get the gist. What do I do about this situation? I obviously haven’t responded, but I’m afraid she might go Lifetime-movie on me. END_OF_DOCUMENT_TOKEN_TO_BE_REPLACED

Ridiculous doesn’t even begin to capture all that transpired, from the storm of emojis to the storming and barricading of Jordan’s house by a cavalcade of Clippers. END_OF_DOCUMENT_TOKEN_TO_BE_REPLACED

END_OF_DOCUMENT_TOKEN_TO_BE_REPLACED

My friend has a dog, and she’s always been kind of half-assed about caring for it. I’ll see her out at a party or a barbeque all day long, so I know the dog is home alone, and sometimes she goes out right after she finishes a shift (she’s a waitress, so that might be pretty late), without even going home to feed the dog or let it out. The other day, though, I went over to her house and realized things have crossed a line. There were piles of dog feces in a couple of corners, and the entryway rug was soaked in urine when we walked in. She laughed it off and called the dog naughty, then cleaned up the poop and basically ignored it. I’m worried about the puppy, and about my friend; what kind of person does that to an animal? Should I call animal control on her? END_OF_DOCUMENT_TOKEN_TO_BE_REPLACED