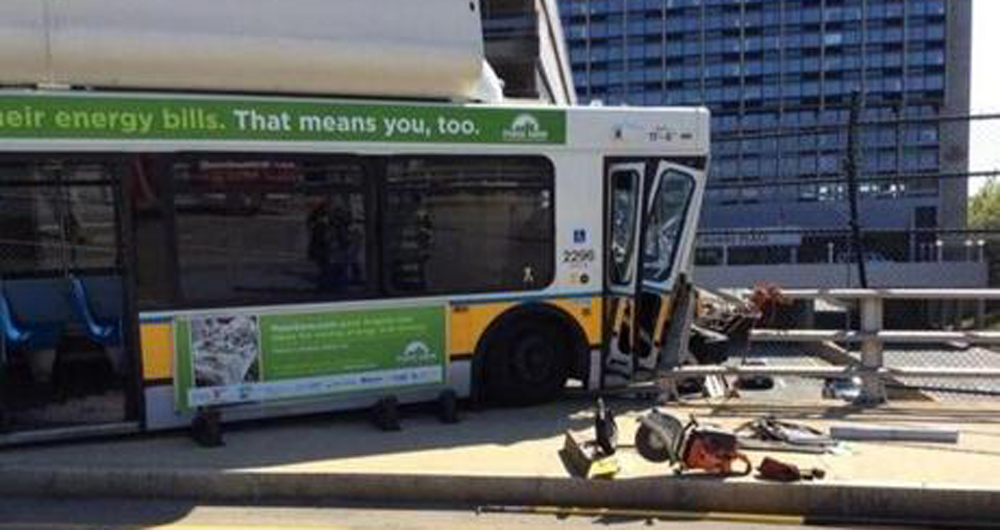 Heading to the bar this weekend to hit on recent college graduates? Want to impress new friends at your seventh wedding of the 2014 season? Look smart by memorizing these headlines about sneezing bus drivers and enormous dino bones, and people will believe that you too graduated order of the coif (a real thing that I didn’t just make up, apparently). And who knows, maybe next year your friends will be buying you a juicer or a designer cake tray to celebrate undying love! The MBTA bus driver claimed she lost control of her vehicle because a violent round of allergy-induced sneezes convulsed her straight into the guardrail of a highway overpass in Newton—bringing new urgency to the phrase, “God bless you.” But the security cameras disagree, showing that the driver was on her cell phone when the crash occurred. Looks like that’s the end of the popular sneeze defense.

Mayor Joseph Curtatone has officially ended Somerville’s participation in the federal Secure Communities program, on the grounds that it’s making the community … um, less secure. According to Somerville Police, the practice of detaining undocumented immigrants for minor civil offenses has hurt cops’ relationship with the immigrant community, leaving many crimes unsolved. New bar game: Rename this and other federal programs to more accurately describe what they do. For example, the War on Drugs could be called the Endless Myopic Struggle Against a Symptom of Poverty, and Operation Fast and Furious could be changed to Operation Give Guns to Mexican Drug Cartels.

Boston cabbies protested outside Uber headquarters on Thursday, saying they’re being choked by rules while unregulated drivers are stealing their business. Taxi drivers may have been trying to give Uber bad publicity, but between offering $3,000 chopper rides to the Hamptons, absurd price-gauging, oh, and killing a six year old, we’d say Uber is doing a fine job of that on its own. See how many “Uber? I don’t even know her!” jokes you can make in one evening. Your designated driver will think it’s hilarious.

The 7.9-foot-long thighbone of what may be the largest dinosaur ever discovered has been unearthed in South America. The Argentinizilla (just kidding … it’s called the Argentinosaurus) was an estimated 66 feet tall, and scientists—using everyone’s favorite metric for weight—guess that he weighed the same as about 15 elephants. Your predictable, topical pickup line of the week? Skip the obvious “bone(r)” pun and flat out tell a man at the bar that you’re looking for an Argentinosaurus and not another Microceratops (better make it an MIT bar, if you want him to get the joke).

Enter to win tickets to see Trio Da Kali at The Villa Victoria Center of the Arts (Newton, MA) on April 10th. END_OF_DOCUMENT_TOKEN_TO_BE_REPLACED

END_OF_DOCUMENT_TOKEN_TO_BE_REPLACED

Enter to win tickets to Rhye at The Paradise on February 28th. END_OF_DOCUMENT_TOKEN_TO_BE_REPLACED

Enter to win a pair of tickets to attend The Hess Collection Seminar and Dinner as part of Boston Wine Festival 2018 at the Boston Harbor Hotel on Wednesday, March 14th. END_OF_DOCUMENT_TOKEN_TO_BE_REPLACED

Her new album has been pushed back, but we have Kimbra’s new single for you. END_OF_DOCUMENT_TOKEN_TO_BE_REPLACED

The folk duo returns with a new record this week. END_OF_DOCUMENT_TOKEN_TO_BE_REPLACED

Now that we’re done looking back at 2017, let’s look ahead at 2018. END_OF_DOCUMENT_TOKEN_TO_BE_REPLACED

Our first Song of the Week for 2018. END_OF_DOCUMENT_TOKEN_TO_BE_REPLACED