Pre-Bar Exam: Class is in Session 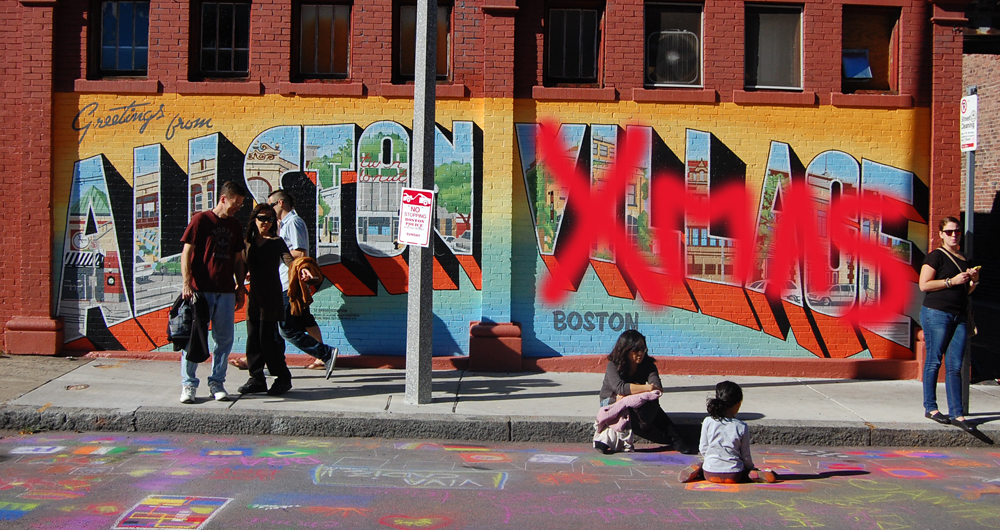 You might not feel the wind chill yet and the Farmers’ Almanac doesn’t cover the sudden shift in the median age of a city, but still, believe us: it’s fall, and the students are coming. Enjoy the heat and your ability to move your arms in your favorite dive bar while you still can this weekend. You bring that old college try (or, you know, the opposite of that), and we’ll school you on all the topical conversation starters like the latest in the Market Basket drama and the thrill of Allston Christmas. That way, when you chat about current events this weekend, you’ll seem … educated.

We hope you were good this year because this weekend, Santa’s cigarette smoking, tattooed brother Rocko Claus is coming to town. That’s right: It’s Allston Christmas! So after a few drinks, take the gang over to Packard’s Corner, where the streets are littered with free furniture as the student population turns over in time for school. You might just find the perfect addition to your home: bed bugs!

After last week’s horrific execution of journalist James Foley, some good news: reporter Peter Theo Curtis has returned home. He has been living for two years in captivity in Syria, where he was tortured by jihadists. On the upshot, he’s back in his ancestral home in the People’s Republic of Cambridge, where he can rest easy, commune with family, and get all the vegan food his heart desires.

The standoff is over: Saint Arthur T. Demoulas has been reinstated as head of Market Basket, and the favorite chain supermarket of Massholes everywhere has sprung back to life. You’ve never seen people so excited about buying moldy fruit expired milk.

A shooting instructor in Arizona was tragically killed when he taught one of his pupils—a nine-year-old girl—how to shoot an Uzi, and the recoil knocked him in the head. Why does a young child need to learn how to shoot a submachine gun, you ask? Self defense … against, you know, an invading army. Or … water buffalos.

An earthquake left Napa Valley all shook up, and while there were no human fatalities, the disaster wasn’t without its tragedy. The wine! Think of the wine, people!

Ah, autumn in New England: The new cardigans, Midwestern tourists gawking at the leaves, and the annual school bus driver union fracas. As of Wednesday, the Boston Public School system said all bus driver shifts were covered, but with more schools starting their first day next week, it’s anyone’s guess as to whether the troubles will continue. You might as well place bets on the school bus schedule. Regular football season doesn’t start until Wednesday, and you’ve got to kill time with some other form of meaningless speculation. Plus: wondering whether impossibly large, junk-fueled machines will carry their cargo over the finish line? Not so different from football.

The Commonwealth Hotel, built atop the site of a dearly departed gritty punk club known as the Rat, has created a deluxe room in honor of the glorious filth hole. The suite will include expensive rock memorabilia, fancy décor and a $500-a-night price tag that doesn’t suit its namesake at all. Punk enthusiasts who want to pay tribute to the club, but, like its former clientele, can’t afford the price of admission, may want to consider heading over to nearby Allston and sleeping on the floor in a basement apartment with a busted toilet instead. If you’re an Allstonian, you can definitely turn that into a pick up line: “Wanna come back to my place and feel the spirit of the ’80s punk scene?”

Enter to win a pair of tickets to attend The Hess Collection Seminar and Dinner as part of Boston Wine Festival 2018 at the Boston Harbor Hotel on Wednesday, March 14th. END_OF_DOCUMENT_TOKEN_TO_BE_REPLACED

Boston band Funeral Advantage is Tyler Kershaw. And Tyler Kershaw had a fun childhood, so it seems. END_OF_DOCUMENT_TOKEN_TO_BE_REPLACED

Perry put me on to daephne and the album blew my mind. END_OF_DOCUMENT_TOKEN_TO_BE_REPLACED

END_OF_DOCUMENT_TOKEN_TO_BE_REPLACED

Ted Regan of the family-owned and operated Mass Bay Lines joined me in studio this morning. This summer, Mass By Lines is celebrating their 50th anniversary by adding a variety of specialty cruises to their well-known Harbor Tours, Sunset Cruises, and Starlight Cruises. Click here to enter to win VIP passes that will get you on to any cruise for free for the entire summer! Click through to listen to my chat with Ted. END_OF_DOCUMENT_TOKEN_TO_BE_REPLACED