Point/Counterpoint: Should the 2024 Olympics Be in Boston? 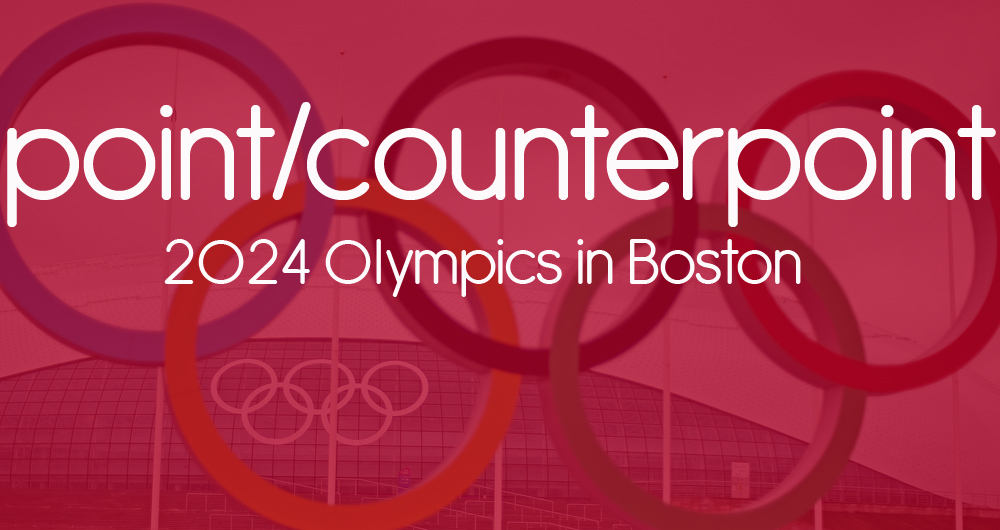 Point/Counterpoint is a recurring feature on BDCwire which explores the pros and cons of various parts of life in Boston. These arguments may, or may not, break any new ground, but are meant as a starting point for you too to make an argument. What do you think? Are you pro-Olympics in Boston or anti-Olympics in Boston?

John Wiley, arguing against the 2024 Olympics being in Boston

So far, Massachusetts pols are loving the idea of Boston hosting the 2024 Summer Olympics, while most Bostonians seem more or less concerned about the traffic. Frankly, many of these concerns over gridlock are overstated, especially considering how decentralized modern Olympics games tend to be. But while 3 weeks of congestion is little more than an inconvenience, taxpayers could end up paying a tremendous rent on the near-decade of shortsighted investments in infrastructure the summer Olympics would necessarily spur.

If anything, the Big Dig should have made Boston acutely aware of how adverse the old city is to invasive new development. Construction in Boston is heavily burdened by the monetary and political hurdles created by bureaucratic agencies like the Boston Redevelopment Authority, as well as the city’s parochial neighborhood associations. The 2012 London Summer Olympics cost approximately the equivalent of $16 billion, and that was one of the more conservative ceremonies in recent memory (the most recent Sochi Olympics cost an equivalent of $51 billion). At the very least, we’re talking about the monetary equivalent of another Big Dig. While aspects of Boston’s infrastructure could use significant work (MBTA, I’m looking at you), the promise of commonsense upgrades will likely prove little more than a chimera. Boston taxpayers should be aware they’d also be picking up the tab on a series of investments that would almost exclusively favor private interests and the global elite.

Perry Eaton, arguing in favor of the 2024 Olympics being in Boston

Yes, the Olympics in Boston would be a huge headache and would conjure up more complaints than praise in the long run, but isn’t that basically Boston sports culture in a nutshell? We’re blessed with four of the best sports teams in the country, yet we treasure the moments when we can find creative ways to bellyache about them much more than moments in which we can celebrate their successes. Why should that be any different when it comes to the greatest global celebration of athleticism? Plus, taxpayer money aside, many of the problems that we’re anticipating are really just first world problems which, when compared to the prestige and honor that comes with hosting the Olympics, are pretty minute. It’s not like we’ll all be forced into unjust back-breaking labor to erect new buildings or all of our stray dogs will be shot and killed. In reality, it will probably just tack more time onto your already long commute on the B line, or get you to the Cape an hour later on a Friday.

If all of these tech and innovation freaks’ predictions are true, Boston is going to have to equip itself for a rapid evolution anyway. More startups will be finding their home in the Hub, which means it will need to become increasingly more attractive for young professionals. The Olympics will not only provide another (kinda impressive) thing to put on the resume, but it will provide a concrete target to shoot for to, I don’t know, lets say, make our public transportation system not suck so hard, or build more micro-units to accommodate the population boost. Without something like this on the calendar, Boston’s snail’s pace could potentially not keep up with its own potential. That, and “Dirty Water” at every medal medal ceremony would be wicked rad bro, right???

Enter to win a pair of tickets to attend The Hess Collection Seminar and Dinner as part of Boston Wine Festival 2018 at the Boston Harbor Hotel on Wednesday, March 14th. END_OF_DOCUMENT_TOKEN_TO_BE_REPLACED

The Black and Gold continue their run tonight at TD Garden. END_OF_DOCUMENT_TOKEN_TO_BE_REPLACED

Who will make the Class of 2018? END_OF_DOCUMENT_TOKEN_TO_BE_REPLACED

It’s been awhile since we talked Black and Gold. END_OF_DOCUMENT_TOKEN_TO_BE_REPLACED

You’re going to wish you were in the Northern Alps. END_OF_DOCUMENT_TOKEN_TO_BE_REPLACED