Point/Counterpoint: Should College Football be More Popular in New England? 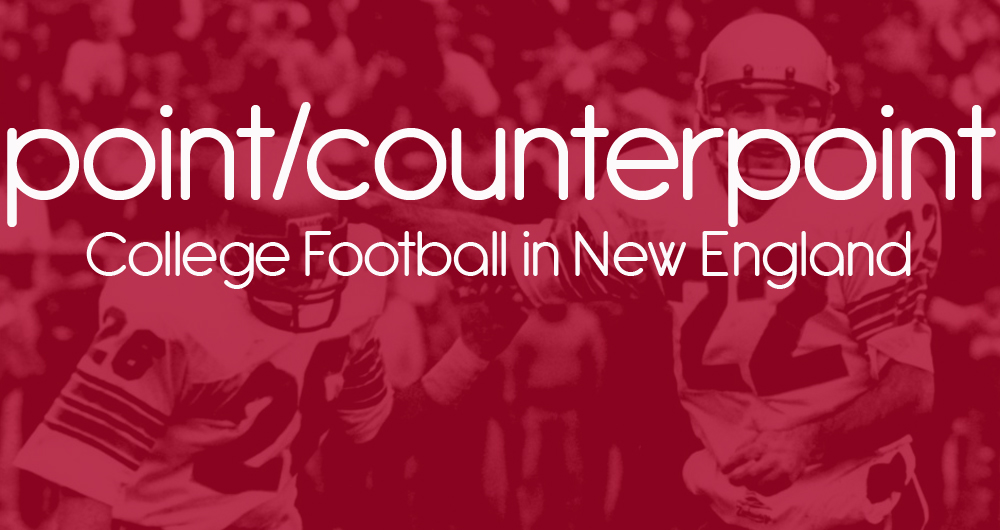 Point/Counterpoint is a recurring feature on BDCwire that explores the pros and cons of various parts of life in Boston. These arguments may, or may not, break any new ground, but are meant as a starting point for you too to make an argument. What do you think? Is New England college football territory, or should it stop pretending?

Kevin Slane, arguing in favor of the popularity of college football in New England:

It’s no secret that New Englanders love the Patriots — minus those Western Connecticut traitors who foolishly rock Giants jerseys and pinstripes. The Brady-Belichick era has been one of the greatest dynasties in NFL history, and it’s understandable that New Englanders have been swept up in Patriots fever. But the pigskin lovers of New England should start taking more of an interest in college football in order to fully fill their weekend with gridiron glory. When Harvard hosts Yale  on November 22, it will mark 139 years since the two teams faced off in what fans call “The Game.” On November 8, Williams will travel to Amherst for “The Biggest Little Game in America,” a matchup that saw ESPN’s College Gameday pay a visit in 2007, the first time ever that a Division III school played host to the program. Big deal, you might say. If I’m going to watch college football, I want to see top-flight competition. Lucky for you, Boston is home to thousands of alumni from SEC, Big Ten, and PAC 12 schools, who faithfully flood alumni bars scattered across the city to cheer on their alma maters. As a University of Wisconsin-Madison alum, I can attest that the Baseball Tavern near Fenway Park regularly fills up with extremely friendly alumni who welcome fans new and old, and whose love for beer is only outstripped by their love for the Badgers. So if you’re looking to expand your football horizons, stop by sometime. I’ll be sure to buy you a cold one.

Perry Eaton, arguing against the popularity of college football in New England:

They say college football is a religion in the South. Well, here in New England, we tend to do our best to ignore the religious tendencies of those below the Mason-Dixon, so why start caring now? Perhaps that’s an ignorant reason for avoiding college football (it is), but to be honest, there’s really no particularly good reason to get all hot and bothered about college football in this neck of the woods. No team in the area has been worth the effort since Doug Flutie threw a really long pass in 1984, not even the Matty Ice-era BC Eagles of 2007, who, in retrospect, completely underperformed given the talent in their roster. UMass may never see another Victor Cruz, Harvard plays in a stadium that Texas high school teams would laugh at, even when BC upsets one really good team, they love to go and lose to three bad ones, and Northeastern took a good look at itself and decided to go the let’s-just-focus-on-hockey way of BU. The thing is, it’s OK. To put it arrogantly, we don’t really need college football. The college ball loyals around these parts are typically ones who attended a popular football school. That’s cool and all, but unfortunately the dream is kind of over because those folks are no longer in college. Instead, they live in an area that boasts 4 professional teams that have each walked away with a championship in the past decade. Not a bad alternative. College football, much like its older brother the NFL, is an organization whose corruption and sketchily enforced rules are starting to overshadow the real fun. Let’s leave that to the rest of the country to complain about, cool?

Getting drunk and storming a field in the name of victory is a good bucket list item though, I’ll give it that.

Enter to win a pair of tickets to attend The Hess Collection Seminar and Dinner as part of Boston Wine Festival 2018 at the Boston Harbor Hotel on Wednesday, March 14th. END_OF_DOCUMENT_TOKEN_TO_BE_REPLACED

The Black and Gold continue their run tonight at TD Garden. END_OF_DOCUMENT_TOKEN_TO_BE_REPLACED

Who will make the Class of 2018? END_OF_DOCUMENT_TOKEN_TO_BE_REPLACED

It’s been awhile since we talked Black and Gold. END_OF_DOCUMENT_TOKEN_TO_BE_REPLACED

You’re going to wish you were in the Northern Alps. END_OF_DOCUMENT_TOKEN_TO_BE_REPLACED