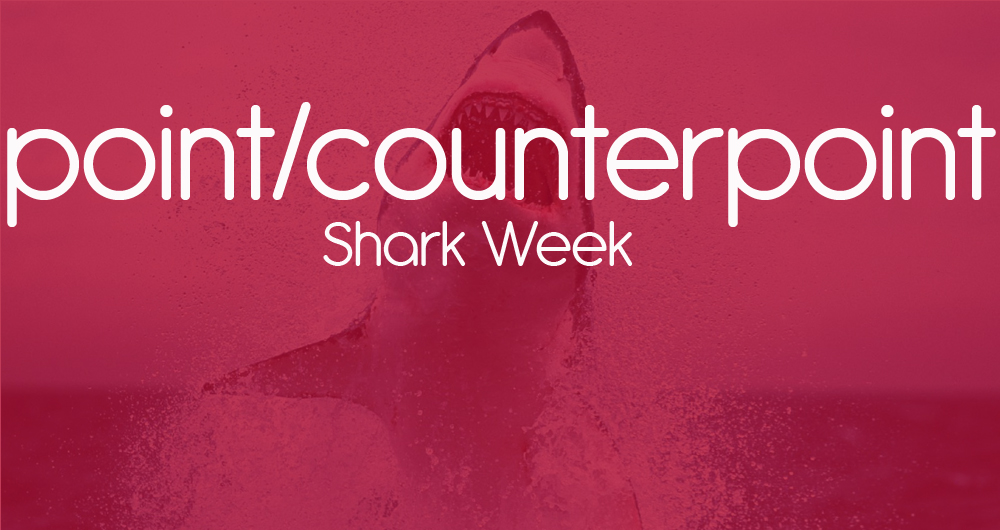 Point/Counterpoint is a recurring feature on BDCwire which explores the pros and cons of various parts of life in Boston. These arguments may, or may not, break any new ground, but are meant as a starting point for you too to make an argument. Today’s debate surrounds the popular annual television event, Shark Week. What do you think? Are you pro-Shark Week or anti-Shark Week? Here are our two sides, but be sure to cast your vote below.

If Shark Week is so five years ago, then hating on Shark Week is so two years ago. Of course, if someone at the office came up to me and said, “live every week like it’s Shark Week,” I’d be rather disappointed in all things, but what Shark Week should really be celebrated for is not its inexplicable quality of moistening the panties of dudebros everywhere, but that it’s possibly the one week out of the entire year that educational television is glorified on a national level. When looked at that way, it’s hard to really argue, even if the fad is a bit passé, that Shark Week isn’t kind of a beautiful thing. For every “Big Brother 16,” and every “Keeping Up With the Kardashians,” this is the one chance that Twitter and Facebook, and everything else we waste an embarrassing amount of time on, will exalt the wonders of nature, the beauty of wildlife, and the people unfortunate enough to fall victim to them. If the winning combination of education and entertainment is for nerds, then dammit, this country could use more nerds and fewer jaded curmudgeons. Will I be watching? Nah bro, I prefer “House Hunters” over “Shark Hunters.” But is the popularity of Shark Week really worth all of the concentrated snark and criticism? Nah bro, chill with that.

Perry’s right. You’ve definitely been told to “live every week like it’s Shark Week.,” and the person who said this to you probably either had a “live, laugh, love” tattoo or can quote “Step Brothers” from end to beginning. That’s because Shark Week has – wait for it – utterly jumped the shark. Shark Week, which is 90% boring conservationist propaganda and 10% “Air Jaws” reruns, was, as Dan McCarthy so astutely put it, a “brand-saving” gimmick for Discovery, so it’s no wonder it’s been exploited every August to keep the channel on the air. But our culture is an indiscriminate whore. When Shark Week stopped being a Discovery thing and became a pervasive phenomenon, that’s when things got oversaturated. For fuck’s sake, look at all these crappy apps dedicated to Shark Week. That’s how far we’ve come since Discovery humbly dedicated one quarter of August to promoting shark awareness. Now, we’re probably only two years removed from Sharknado Week and “Jaws”-themed Spartan Races. Shark Week is a garbage fire I shouldn’t even bother pissing on.

Always a pleasure to have Boston.com’s Perry Eaton in studio for a chat. After we talked a bit about Pearl Jam at Fenway and Perry’s new podcast, he filled us in on Game of Thrones live and Narragansett’s new Bananagrams-themed brew. END_OF_DOCUMENT_TOKEN_TO_BE_REPLACED

No, not from afar, from the comfort of her couch. From the actual awards themselves. That’s where Meredith Goldstein was for the Oscars. She shared all the juicy, first-hand details with me. END_OF_DOCUMENT_TOKEN_TO_BE_REPLACED

It was wonderful having our good friend Meredith Goldstein back in studio this morning. She dug into the latest edition of Love Letters, which prompted us to play this song. And of course we had to discuss the Oscars. Make sure you’re following Meredith on Twitter, as she’ll be live-tweeting the awards this Sunday night. END_OF_DOCUMENT_TOKEN_TO_BE_REPLACED

Our first edition of TV Sets for 2016 might be better than every edition from 2015. END_OF_DOCUMENT_TOKEN_TO_BE_REPLACED