Point/Counterpoint: Is Allston gentrification a good thing or a bad thing? 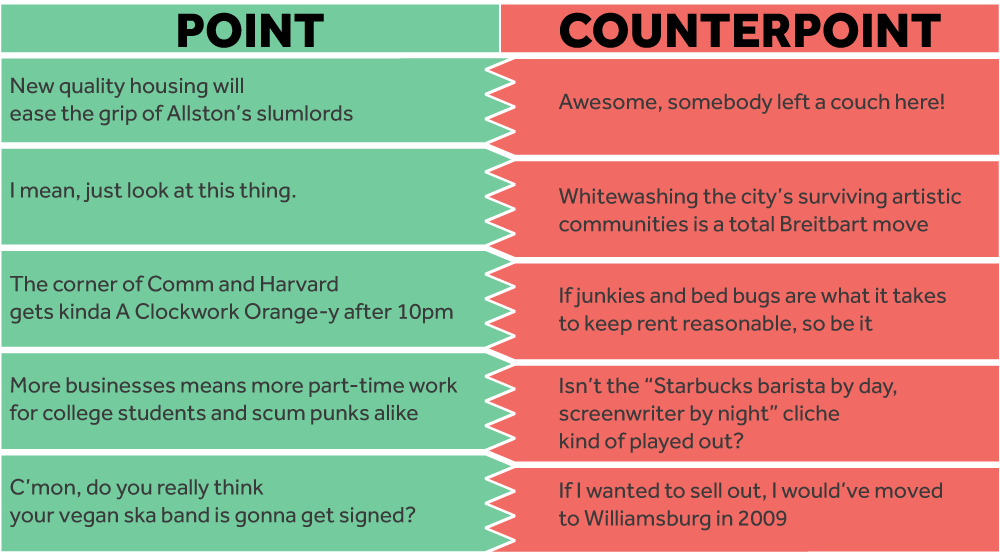 Point/Counterpoint is a recurring feature on BDCwire which explores the pros and cons of various parts of life in Boston. These arguments may, or may not, break any new ground, but are meant as a starting point for you too to make an argument. What do you think? Are you pro-gentrification or anti-gentrification?

Allston is an easy target, because deliberately misunderstanding something eliminates all hang-ups about destroying it. However, as one of the last bastions of artistic culture in Boston, Allston is an important counter to the sterilized (and exorbitantly expensive) sections of the city like the North End, South Boston, and Beacon Hill. Plus, do we really need another fucking Starbucks? Starching and pressing all the character out of a city so that you can build more luxury condos for more stonejawed yuppies is not a model of sustainability. First it’s Harper’s Ferry and DoReMi, then it’s Great Scott, Fast Eddie’s, and Mr. Music. Pretty soon we’ll be fracked out of anything and everything worth loving about this hipster haven. The Green District was a nice idea, but Allston needs to grow organically. More incentives for local businesses. More community-oriented restoration. Scorched earth gentrification is so Bush Administration.

Perry Eaton, arguing in favor of gentrification of Allston

It’s difficult to argue in favor of gentrification of a place I’ve called home for five years now, but according to this study by the Cleveland Fed, Boston is undergoing the most rapid gentrification of any city in the country, so this shit is inevitable. What must be highlighted, however, is that there’s a difference between gentrification and stripping a neighborhood of its culture and creativity. In a response to Spike Lee’s recent rant on the gentrification of Brooklyn, NYU professor of urban policy Mitchell Moss said, “Cities don’t stand still, and the cities that stand still are Detroit.” Clearly, it’s a beast of a different breed, but if Allston looked like Brooklyn more than Detroit in 10 years, that wouldn’t be the worst thing. It’s more about finding ways to retain its culture and character. If Allston is as creative as it claims to be, its businesses would find creative ways to grow with it. This may mean an end to basement shows, but maybe it will mean more money being recycled into the community’s creative economy. Allston could benefit from a few more music venues, a few more art spaces, maybe even some more programs to help foster artistic growth in its youth. That will only come if more money is there to support them. Plus, would it be the worst thing to put an end to BU frat parties?

Enter to win a pair of tickets to attend The Hess Collection Seminar and Dinner as part of Boston Wine Festival 2018 at the Boston Harbor Hotel on Wednesday, March 14th. END_OF_DOCUMENT_TOKEN_TO_BE_REPLACED

Boston band Funeral Advantage is Tyler Kershaw. And Tyler Kershaw had a fun childhood, so it seems. END_OF_DOCUMENT_TOKEN_TO_BE_REPLACED

Perry put me on to daephne and the album blew my mind. END_OF_DOCUMENT_TOKEN_TO_BE_REPLACED

END_OF_DOCUMENT_TOKEN_TO_BE_REPLACED

I’m in my mid-twenties, and I’ve been working as a substitute teacher for the last couple years (I joined Teach for America right out of college). I know some of the girls in classes I teach have crushes on me — high schoolers aren’t very subtle — but I brush it off, because I’m not an idiot. Last week, however, I got a disturbing email from a girl in the English class I subbed for. Pictures were attached. You get the gist. What do I do about this situation? I obviously haven’t responded, but I’m afraid she might go Lifetime-movie on me. END_OF_DOCUMENT_TOKEN_TO_BE_REPLACED