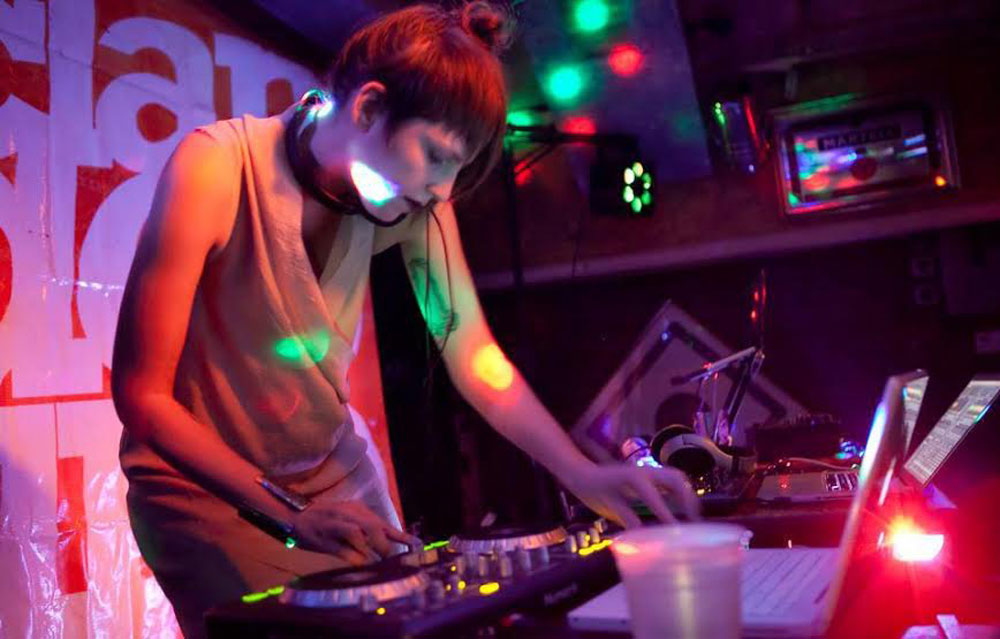 It’s gross out. You just spent all week alternately shoveling snow, engaging in petty battles with your neighbors over parking spaces, freezing your face off, and bitterly detailing it all on social media. Fortunately Picó Picante, Good Life’s rollicking monthly global bass party, is back this Friday to help you thaw out and shake it off. We asked Sara Skolnick, also known as DJ Riobamba, who runs the night along with resident DJs Oxycontinental and Ultratumba and visual artist Hexbeam, to tell us how she keeps the dance floor red-hot. No big deal, but Skolnick also happens to be studying digital music culture in Colombia on a Fulbright grant. Read on as the DJ-scholar drops a little transnational music education on us.

Q. Picó Picante isn’t a party where you bob your head politely while nursing a beer. It’s a place to dance your ass off. What’s a great beginning-of-the-night track you might play to loosen up the more timid folks?

A. I’m pretty partial to opening up with a cumbia track to get the night going – accordions inspire dance! A favorite is “Soy Soltero” by El Dipy, who’s formerly of cumbia villera group El Empuje, but has been at it solo for the past few years.

Q. How about a super sexy track that’ll have people totally throwing caution to the wind and dancing up on each other?

A. Sonora, from the Austin-based collective Peligrosa, did a great remix of “La Muñeca” by Joe Veras. On Soundcloud he called it “Bachata Club,” reinforcing a bachata track with some extra percussion and claps and mixed with slightly electronic feel, which I’ve seen create special feelings on the dance floor.

Q. What’s a Picó Picante favorite that gets all the DJs dancing in the booth?

A. I think the three of us were all pretty psyched when Rizzla and Blk.Adonis dropped their “Battyjack EP” earlier this summer. “Battyjack (Club Mix)” kills the floor and is a tribute to ’90s ragga house, featuring vocals by dancehall queen Lisa Hyper. Both of them are friends of Picó and have played the party a few times. It’s always really exciting to see extended family put out such solid tracks.

Q. For the past several months you’ve been in Colombia studying the intersection of evolving regional music styles and electronic dance music, and the influence of readily available digital production tools. Tell us about some of the stuff you’ve picked up during your time abroad that you can’t wait to play in Boston.

A. Bogotá by-way-of Barranquilla artist Monosóniko Champetúo put out a champeta remix called “El Ray en Vacile” that was co-produced with B-Clips, who happens to be a cousin of Picó resident Oxycontinental. “¡Extended familia!” Monosóniko samples live on the track with a Casio SK5 keyboard and it’s a good example of picotero music that inspired our party’s namesake. I spoke with him recently for my PA’ PICAR interview project, where he explains about the roots of champeta music and also did a live performance in his home studio.

“Ta Suave” is a salsa choke version of Junior Jein’s reggaeton/hip-hop track that came out under the same name. Salsa choke is big coming out of Cali right now, with other artists like Integración Casanova (you can hear “La Tusa” all over Bogotá), Los Traviesos, and Son de AK, among others. Choke, or choque, means crash in Spanish and is a caleño breed of salsa incorporating música del Pacifico like marimba and a “bump” dance that’s a continuation of the growth of the style over the past few years (shout-out to Wayne Marshall/Wayne&Wax for documenting this in detail in 2011).

And I can’t leave out “La Invita a Bailar” by champeta urbana star Kevin Florez. This track is pretty much ubiquitous in clubs and radio, and he just took home a handful of awards at this year’s Premios Shock. This track got its start in Cartagena with the picó El Rey del Rocha and is emblematic of the champeta boom right now that’s carving out lots of new club night spaces and opportunities for costeño artists.

Got all that? Perfecto. If you’re not dancing in your chair even a little, well, I’m sorry. There’s nothing else we can do for you (though you may want to check your pulse). The rest of you can head to Picó Picante with DJs Riobamba, El Poser, Oxycontinental, Ultratumba, and special guest Space Monkey at Good Life Dec. 20 at 10 p.m. This month, proceeds from the door will go toward bringing political street theater collective Papel Machete from Puerto Rico to Boston, so you’ll be doing yourself and our city some good. If you’re interested in hearing more from Skolnick, check out her recently released “Altiplano Urbano” mixtape via Sounds and Colours magazine.

Enter to win tickets to see Trio Da Kali at The Villa Victoria Center of the Arts (Newton, MA) on April 10th. END_OF_DOCUMENT_TOKEN_TO_BE_REPLACED

END_OF_DOCUMENT_TOKEN_TO_BE_REPLACED

Enter to win tickets to Rhye at The Paradise on February 28th. END_OF_DOCUMENT_TOKEN_TO_BE_REPLACED

Enter to win a pair of tickets to attend The Hess Collection Seminar and Dinner as part of Boston Wine Festival 2018 at the Boston Harbor Hotel on Wednesday, March 14th. END_OF_DOCUMENT_TOKEN_TO_BE_REPLACED

Her new album has been pushed back, but we have Kimbra’s new single for you. END_OF_DOCUMENT_TOKEN_TO_BE_REPLACED

The folk duo returns with a new record this week. END_OF_DOCUMENT_TOKEN_TO_BE_REPLACED

Now that we’re done looking back at 2017, let’s look ahead at 2018. END_OF_DOCUMENT_TOKEN_TO_BE_REPLACED

Our first Song of the Week for 2018. END_OF_DOCUMENT_TOKEN_TO_BE_REPLACED