Picking the Brain of the Man Behind Goldenstash 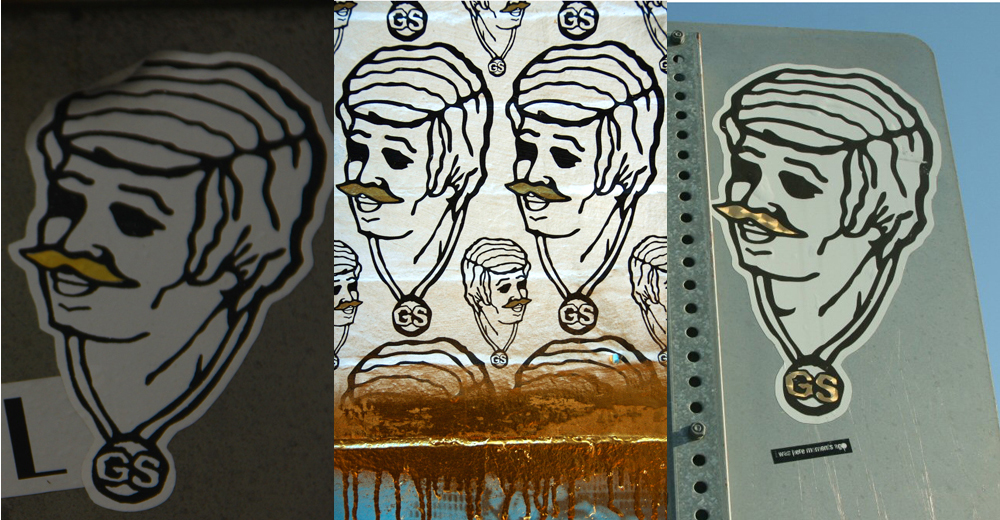 Somewhere in the world, the author of the obscure architectural art tome that inspired an unmistakable icon of urban esoteria has no idea.

Those who walked the streets of either town during last decade or thereabouts have probably all, if briefly, gazed upon a sticker bearing the reassuring grin of Chadwick W. Gildenstachen – best known as Goldenstash.

The anonymous now 30-something whose imagination spawned the ‘Stash parled with us at the Tam the other day. Those interested in the enigmatic artist’s indoor, legal labors ought to swing by The Junxiun in Union Square this Saturday evening for Explorations in Black + White’s opening reception. Therein, one of his installations will appear alongside the wares of almost a dozen upstart Somervillian crafters.

Q: You’ve said Goldenstash is meant to be a kind of magic symbol. Where does the magical component to your street art come from?

A: I’ve always been into history, and magic is probably one of the oldest recorded things. That’s what the Bible and everything is based around – the magic of creation and of different biblical characters like Solomon and stuff like that. Western society and modernism seeks to take out that mystical passion. I think we’ve kind of lost that…which doesn’t wholly explain the disharmony in the universe, but it certainly could account for some of it. If humans as a society were more spiritual and not as religiously dogmatic, we’d be better, is what I’m trying to say.

Q: Is there an intent behind the Goldenstash symbol?

A: Totally. As much as I’m pessimistic at times,  I want to make everyone happy, even though that isn’t exactly possible, but I want to try in vain.

Q: So he’s like a less-overt “Have a Nice Day” happy face?

A: It’s like “Have a Nice Day” with an intellectual side to it. As opposed to the hippie “Ooooh, love everybody” and whatnot, it’s “Love everybody, but know why you should love everybody.”

Q: Have you seen any street art recently that made you go, “Wow, that’s amazing!” Or maybe, “Yuck, that really sucks…”

Q: What do you think of yourself as?

Q: I like that. How important is anonymity to street artists?

A: Personally, [my anonymity] isn’t so much to protect me. I just enjoy it more the less people know. Do you know how amazingly hilarious it is to hear people talk about your shit in front of you without knowing it’s you? It’s the best feeling ever. Don’t get me wrong, I’ve been here for a long time and people know who I really am. But I still have those moments every once in a while, and it tickles me pink.

Q: How often does that happen?

A: A couple of times a year. In 2007 or 2008 when I  feel like I had this mountain of hype riding for me, it was ridiculous. I would walk down the street and hear people talking about me, pointing out my shit saying, “Yo, that’s Goldenstash!”  I’ve heard stories that I’m a millionaire and all this other crazy stuff. The less people know, the more they make up on their own.

Q: You were like an invisible rock star. Did you ever think about licensing t-shirts for the pay day?

A: I’ve had opportunities to sell t-shirts, and I will here and there. Don’t get me wrong, I’m not talking down to commercializing my image at all. But I prefer to almost…

Q: Well, I mean, what if Urban Outfitters wanted to sell Goldenstash swag?

A: It would depend on the check, first of all. I don’t think it would be big enough for me to whore myself out to them, and in the long run, they would probably just rip it off. There’s a restaurant on the corner of Boylston and Arlington, and they took one of my stickers off the street. Now they’re using it as their men’s room sign. I sent my manager to talk to them, and he said, “He’ll do a better bathroom thing for you for some money.” They never followed up.

Q: They’re stealing your work to promote their restaurant!

A: It kind of does make me feel happy that a “nice” restaurant  knows enough to think my shit is cool and to rip it down and put it on their bathroom door. At least they’re stealing my cool. Does that make it cool?

Enter to win a pair of tickets to attend The Hess Collection Seminar and Dinner as part of Boston Wine Festival 2018 at the Boston Harbor Hotel on Wednesday, March 14th. END_OF_DOCUMENT_TOKEN_TO_BE_REPLACED

Artists for Humanity Co-founder Jason Talbot and Major Gifts Director Emily Smaldon were in studio this morning with Mallory Bazinet, Event Manager for GrandTen Distilling. Jason and Mallory talked about The Contemporaries, their upcoming event to launch a new patron group for young professionals. Click here to join them on Thursday, August 17! END_OF_DOCUMENT_TOKEN_TO_BE_REPLACED

Aida Villarreal-Licona is the Events Coordinator for SoWa Boston’s Art & Design District. She was in today to talk about their holiday shopping event this Thursday December 15 from 4-8 p.m. at 450 Harrison Avenue. A great opportunity to help local artists and get some holiday shopping done! END_OF_DOCUMENT_TOKEN_TO_BE_REPLACED

Natalie Lemle was in to talk about ArtLifting, a program that aids homeless and disabled artists. Currently, 72 artists in 11 states are receiving 55% of all profits from your purchase of their artwork and photography. Click “more” to hear my chat with Natalie and to see work from one of the artists. END_OF_DOCUMENT_TOKEN_TO_BE_REPLACED

Boston band Funeral Advantage is Tyler Kershaw. And Tyler Kershaw had a fun childhood, so it seems. END_OF_DOCUMENT_TOKEN_TO_BE_REPLACED

Perry put me on to daephne and the album blew my mind. END_OF_DOCUMENT_TOKEN_TO_BE_REPLACED

It’s no secret that Bostonians like to show their Patriot pride with tattoos. Who can forget the awesome guy who got that sweet Bill Belichick arm tattoo? Or the less-awesome guy who showed off his full-head Tom Brady helmet tattoo in his mugshot? END_OF_DOCUMENT_TOKEN_TO_BE_REPLACED