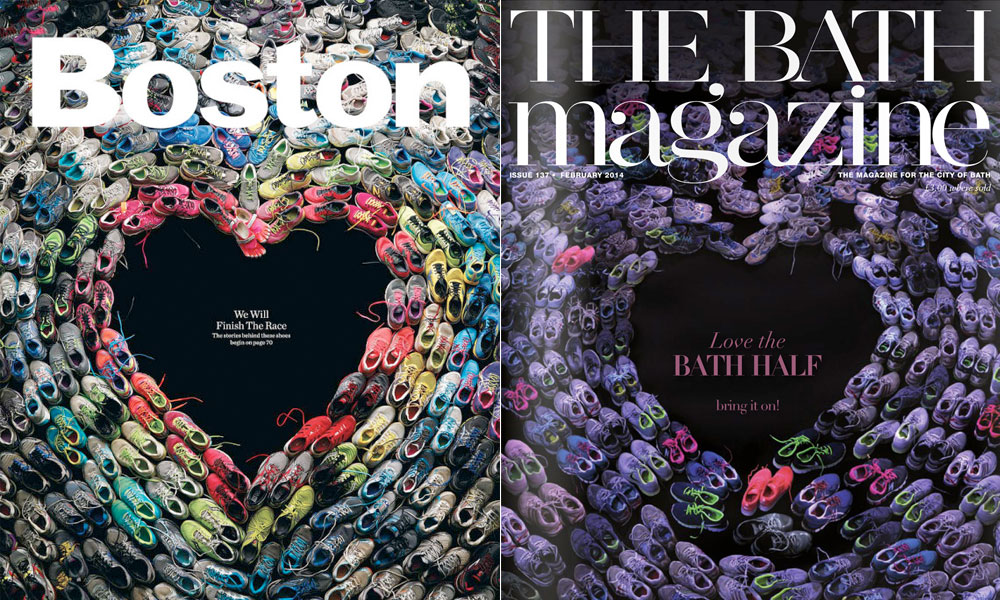 It has been said that “good artists copy, great artists steal.” However, following the recent fiasco behind The Bath Magazine’s February cover story, the city of Boston isn’t so sure about that old adage.

The backlash against The Bath, the British lifestyle glossy accused of stealing Boston magazine’s iconic May 2013 cover, has been swift and unforgiving. The cover made it a little over three hours before being summarily scorned by outraged Twitter users.

Boston has not yet announced plans to take legal action against The Bath, nor have they requested that the cover be redacted. Instead, Boston editor Carly Carioli opted to double down on his magazine’s original intention, urging The Bath, via a statement on Boston’s website, to make amends by donating to the Boston One Fund.

Early this morning, The Bath responded with an open letter on its site, which states:

The Bath Magazine publisher Steve Miklos would like to offer his sincere apologies to anyone who found the similarity between our image and the Boston Magazine cover in any way upsetting, as clearly we did not wish to cause any offence.

We are proud to be supporters of the Bath Half marathon, and indeed members of our staff are running in this year’s race. Our intention was to create a front cover that reflected the twin themes of the inclusive nature of the Bath Half marathon and Valentine, this being our February issue. So we had the idea to feature a heart on the cover but with a running theme coupled with the message on loving the Bath Half. We started to search for an image from the usual stock libraries, then we decided to create our own.

The letter goes on to state that Miklos intends on following through with Carioli’s suggested donation, though an amount was not specified. However, what is clear in The Bath’s statement is that it has not apologized for its basest offense.

The donation will certainly help quell the vitriol, but it does not excuse Miklos, editor Georgette McCready, and her art department for stealing the work of photographer Mitchell Feinberg, former art director Brian Struble, and the entire Boston staff.

In an exclusive statement to BDCwire, Feinberg had this to say about the UK magazine lifting his work:

I am happy to read that the magazine intends to make a donation to the victim’s fund, but I honestly do not understand how this kind of blatant plagiarism occurs. They even copied the laces floating into the heart. Shame! It is not unusual to see photographs based on previous work, but this is just lazy. The original photograph has become something of an icon for the resilience of the city of Boston. I was very honored to be part of it. I am not going to pursue Bath magazine for copyright infringement, but the editor should have known better.

As Feinberg notes, the similarities are irrefutable. On both covers, the tagline to the lead story sits in the center of the image surrounded by an array of untied shoes with neon collars. Though The Bath’s version features a scaled-down heart shot at a decreased downward angle, the shape of the heart is identical. The grain of both shoe arrangements is the same – the toes pointing upward with the outsoles forming the bulb before cleaving down to a point. Save for The Bath’s messier assembly and a grey-purple tint, the covers are an inconsequential match.

Though he did say that he was “disappointed” upon seeing the cover, Struble, who drove the 120 shoes to New York for Feinberg to photograph, declined to make an official statement.

The Bath may plead ignorance, but it admits the vincibility of its ignorance. In the statement, Miklos goes so far as to acknowledge being aware of Boston’s cover beforehand and neglecting to change direction (UPDATE: The company tweeted that it will reprint its cover).

“Late in the process of creating our front cover we were made aware of the Boston Magazine cover,” Miklos said in the statement, “and while we were inspired by it, we realize we have made an error of judgment by not fully realising its connotations in the States.”

Thus, The Bath’s apology is also an admission of guilt – a declaration clarifying that, despite the fact that they could not understand the Hub’s emotional connection to the image, it was fine illegally repurposing it for its media sponsorship. Perhaps they thought that the 3,180 miles between Boston and Bath would be enough to keep its carbon-copy off the local media radar, but its intention is clear.

While it has resolved to do right by the victims of the bombing, The Bath’s apology has only indicted it further in its breach of intellectual property.

When it’s all said and done, it appears The Bath is only sorry that they got caught.

Enter to win a pair of tickets to attend The Hess Collection Seminar and Dinner as part of Boston Wine Festival 2018 at the Boston Harbor Hotel on Wednesday, March 14th. END_OF_DOCUMENT_TOKEN_TO_BE_REPLACED

When he’s not running BostonTweet (or running the Boston Marathon), Tom O’Keefe is running around promoting Flutter. He was in studio with SumuApp co-founder Daniel Tewfik earlier today to talk about how you can win free rent for a year in Boston. END_OF_DOCUMENT_TOKEN_TO_BE_REPLACED

Boston band Funeral Advantage is Tyler Kershaw. And Tyler Kershaw had a fun childhood, so it seems. END_OF_DOCUMENT_TOKEN_TO_BE_REPLACED

Perry put me on to daephne and the album blew my mind. END_OF_DOCUMENT_TOKEN_TO_BE_REPLACED

While many have called out Davis since a video of her refusing to issue a marriage license to Rowan County residents David Moore and David Ermold went viral in July, relationship columnist and gay activist Dan Savage went a step further on MSNBC Tuesday night, saying that “this is about someone hypocritcally looking to cash in”. He added: “And she is a hypocrite.” END_OF_DOCUMENT_TOKEN_TO_BE_REPLACED