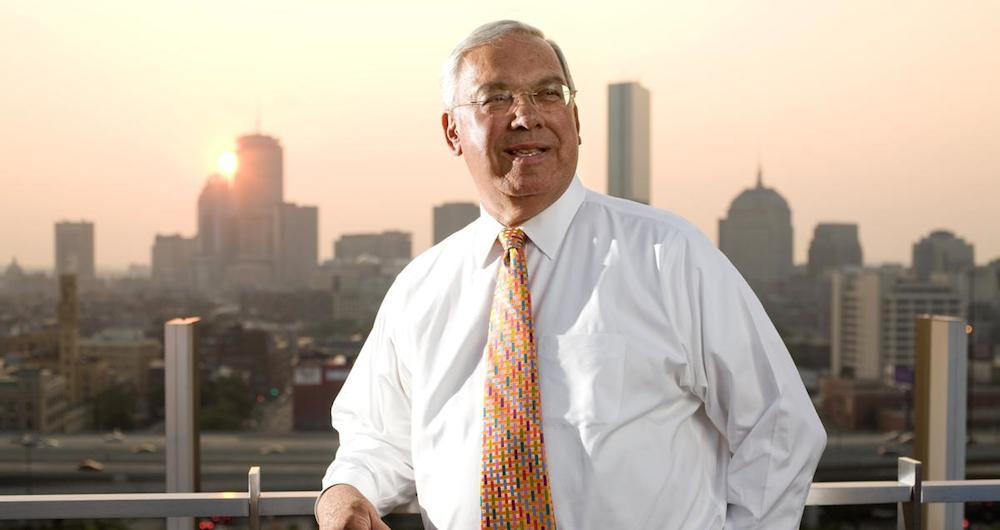 Since the passing of former Mayor Thomas Menino yesterday, tributes have been pouring in nationwide. One longtime Boston resident has started a petition to create a more permanent tribute to Boston’s longest-serving Mayor by renaming Christopher Columbus Park in the North End after him.

Michael Cohen, the author of the petition, believes Menino is the perfect candidate to take over the park’s namesake. According to the petition:

The residents of the City Of Boston and so many others mourn the passing of Tom Menino, who did so much for the city and will surely be remembered as one of our very best mayors. Much will be said and written about how he should be honored and we, the signers of this petition, believe that that Christopher Columbus Park on the waterfront adjacent to the North End should be renamed Tom Menino Park in his honor.

There are so many reasons, which we are all well aware of, that Mayor Menino deserves such an honor. With the recent revelations about Christopher Columbus, it could easily be argued that he no longer deserves the recognition of such a beautiful spot in our city.

Though some would argue that Readville, the Hyde Park neighborhood Menino grew up in and represented on City Council for a decade, would be a more appropriate spot for Thomas Menino Park, Cohen has some valid reasons for picking Columbus Park.  I reached Cohen via email to ask him a few questions about his park petition.

What made you think of Christopher Columbus Park as the spot to honor Menino?

According the the City of Boston Parks and Recreation Directory, the alternate name for Christopher Columbus Park is Waterfront Park. It’s no secret that Tom Menino sought to develop Boston’s waterfront as one of the last great areas in need of development. The Rose Kennedy Greenway opened up the downtown waterfront, the Innovation District opened up the South Boston waterfront, and standing in Waterfront Park, residents and visitors have view of the skyline that he helped build, the Innovation District that he championed, just a few minutes walk from City Hall and the job he so loved… What better place in the city to honor its longest serving Mayor?

Given the mixed legacy of Columbus, I imagine there have been renaming campaigns in the past. Is this your first effort?

This is the first effort I have undertaken to rename a park.  I published the petition last night at about 11 p.m. and right now it has been signed by 291 people. Not too bad for a little more than half of the first day.  I am already seeing the rate of signatures increase and we hope to reach our goal of 10,000 by mid-November.

Has City Hall been notified of your petition?

The Mayor’s office is aware of our efforts and, although I haven’t received an official response yet, I was told I should have it next week. It’s all happening very quickly, but with the flurry of activity we don’t want to lose sight of trying to do a good thing for a great man. (And by the way, Columbus already has a great boulevard named after him in Boston!)
——-
You can read Cohen’s full petition and learn more about the effort to honor the Mayor at TomMeninoPark.org.

Enter to win a pair of tickets to attend The Hess Collection Seminar and Dinner as part of Boston Wine Festival 2018 at the Boston Harbor Hotel on Wednesday, March 14th. END_OF_DOCUMENT_TOKEN_TO_BE_REPLACED

Boston band Funeral Advantage is Tyler Kershaw. And Tyler Kershaw had a fun childhood, so it seems. END_OF_DOCUMENT_TOKEN_TO_BE_REPLACED

Perry put me on to daephne and the album blew my mind. END_OF_DOCUMENT_TOKEN_TO_BE_REPLACED

While many have called out Davis since a video of her refusing to issue a marriage license to Rowan County residents David Moore and David Ermold went viral in July, relationship columnist and gay activist Dan Savage went a step further on MSNBC Tuesday night, saying that “this is about someone hypocritcally looking to cash in”. He added: “And she is a hypocrite.” END_OF_DOCUMENT_TOKEN_TO_BE_REPLACED