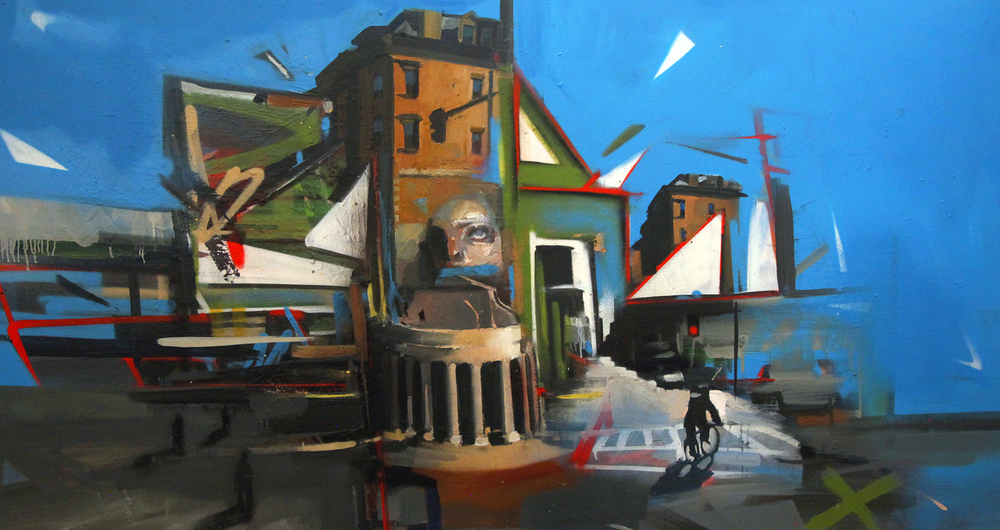 Percy Fortini-Wright’s painted characters almost look like aliens. Multicolored skin, thin necks, and huge eyes– Wright likes to think of them as some sort of alter ego, having come directly from his imagination, and playing into the idea of what it means to be exotic or the ‘other.’ These realistic, yet loosely painted characters will be shown alongside a collection of Wright’s other abstract and representational works at the downtown, Lot F Gallery, starting tonight.

Wright’s more interpretative paintings explore the interaction between language – graffiti style – and forms. He’s not always interested in what the words that he writes actually mean, but rather how the angles and shapes they create relate to the architecture of forms and images they become. Wright’s work has been shown at a number of galleries throughout Boston and will be his second solo show at Lot F. BDCwire caught up with Wright before the opening reception of his new show, “Boston and Beyond,”and told us about how his art continues to intermingle his seasoned graffiti-style with his more classical, nature-inspired paintings.

Q: Tell us a little bit about this series?
A: “Boston and Beyond,” is a body of work that deals with representational paintings as well and the ‘other’, which is the beyond aspect of it. Some of the pieces will be Boston scenes – spray paint and oil paint – and the other series are more abstract-that deal with characters that are out of my imagination. They’re kind of funky, like alter egos, that deal with this idea of the ‘otherness’. They are multicolored and have the big eyes; really realistic, but at the same time, very loosely painted. Other works are going to be more kind of graffiti base, which encompasses all of those things. It has the cityscapes, some figurative aspects, some abstraction going on in there, and that tagging style kind of knitting everything together.

Q: When did you start doing graffiti?
A: I kind of started right out of the womb. One of my best friends got me into it at a really young age. I was doing it simultaneously with learning to paint and draw. I was really drawn to nature and illustrations of nature, and that really sparked my love for representational painting.

Q: Did you find it hard to translate your work from walls to canvases?
A: Well, I still do both. I don’t think of them really as different; just even ratios. I think of them as the same thing. In grad school I really started merging the two, to where they are kind of speaking in one voice.

Q: What about the cityscapes and Boston in general intrigues you and end up in your paintings?
A: Yeah, a lot of the times it is and it’s funny because I don’t really care about particular places that much. I love Boston, but I’m just kind of using it as relatable subject for people to relate to. Since we all live in this beautiful city and it’s good to have some work to relate to the common person. But it’s more of the fact that I have a fascination for painting space. The angularity of the buildings and the space they take up. I mean it could be anything to me. I’m from Boston so a lot of subject matter, since I want to put architecture into it, will use different motifs of my environment. But it’s not everything, because it’s more about finding forms and creating the illusion of space in the thought of impressionistic painters and how they capture that scene of the place.

Q: Some of your works reflect your multiracial identity, how much of these new works nod to those themes?
A: Yeah, it’s definitely still a part of it. The way I try and construct my images, I try to intermix, like I will use my name as a way of the composition character, like a graffiti piece, and then encompassed inside that will be all these images kind of conflicting together where they all mix and never have any rhyme or reason. They kind of just takes these different mixtures of surfaces and objects and mix them together in this melting pot of imagery that kind of look like this explosion of forms coming out of this abstract space.

Q: Have you seen your work naturally evolving in any way lately?
A: Yeah, I’ve been going with this idea that I’ve had in my head, and it’s really starting to match up. I’ve been playing with the idea of the compositions to where it’s the clutter of objectivity mixed with this spacious background. That’s something I’m starting to see kind of happen naturally and it feels emblematic of the way we live here; all this clutter, but then this huge space around us. I’m trying to get that interpretation where it almost looks like a ying-yang symbol. The small dot is all the crazy clutter and then there is all that space around it to give it breathing room. I’ve started to become really excited about my characters as well, they’re done completely out my imagination so they feel a little more like me and my child, and it just sort of happened that way.

Artists for Humanity Co-founder Jason Talbot and Major Gifts Director Emily Smaldon were in studio this morning with Mallory Bazinet, Event Manager for GrandTen Distilling. Jason and Mallory talked about The Contemporaries, their upcoming event to launch a new patron group for young professionals. Click here to join them on Thursday, August 17! END_OF_DOCUMENT_TOKEN_TO_BE_REPLACED

Aida Villarreal-Licona is the Events Coordinator for SoWa Boston’s Art & Design District. She was in today to talk about their holiday shopping event this Thursday December 15 from 4-8 p.m. at 450 Harrison Avenue. A great opportunity to help local artists and get some holiday shopping done! END_OF_DOCUMENT_TOKEN_TO_BE_REPLACED

Natalie Lemle was in to talk about ArtLifting, a program that aids homeless and disabled artists. Currently, 72 artists in 11 states are receiving 55% of all profits from your purchase of their artwork and photography. Click “more” to hear my chat with Natalie and to see work from one of the artists. END_OF_DOCUMENT_TOKEN_TO_BE_REPLACED

It’s no secret that Bostonians like to show their Patriot pride with tattoos. Who can forget the awesome guy who got that sweet Bill Belichick arm tattoo? Or the less-awesome guy who showed off his full-head Tom Brady helmet tattoo in his mugshot? END_OF_DOCUMENT_TOKEN_TO_BE_REPLACED