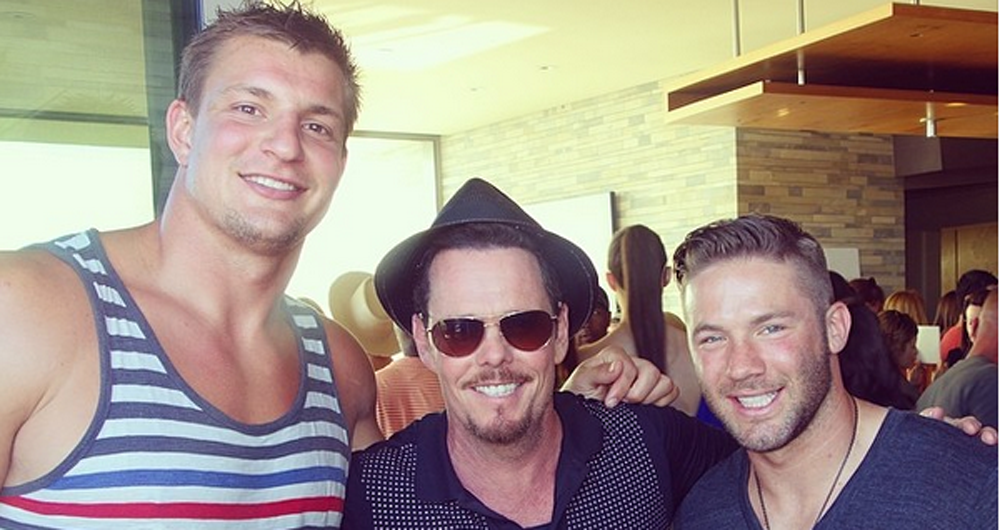 While it’s no secret that our favorite professional athletes happen to be your typical “bro” in a much more expensive version of the bro uniform, it’s always kind of a bummer to be reminded just how deep the bro roots run. Especially when it’s the Patriots.

We probably shouldn’t be surprised then that they have questionable taste in entertainment. We all remember Tom Brady’s indelible performance on the zoological study of the Greater American Bro genus “Entourage” from a few years back, right? Except me, because I definitely never watched and enjoyed that show for its first few seasons and anyone who says otherwise is lying.

Turns out he had so much fun he came back for more, and was spotted on the set of the upcoming “Entourage” film, hanging with director Doug Ellin and looking more like an 80 year old Italian guy sipping espresso on on Hanover St. than a super star athlete.

<5,000 melodramatic sanctimonious words about “distractions” and “focusing on football”>

He was joined on the set by teammates Rob Gronkowski, the walking embodiment of an Entourage plot, and Julian Edelman, who posed for photos with Kevin Dillon, AKA Johnny Drama, and a some of the actresses from the film.

Keep your hands where we can see them, JE11.

The Patriots weren’t the only football team to visit the set, as superstar athletes Russell Wilson and Bob Saget also stopped by for a visit.

Something tells us these photos aren’t going in the next “thug”-trolling meme when Wilson faces Colin Kaepernick again.

At the very least, we hope a visit from his favorite team was a morale-booster for Entourage producer Mark Wahlberg, whose most recent attempt to ring the last few drops of water out of the cliched “Boston” stone, “Breaking Boston,”  was canceled by A&E after one episode this week. Inexplicably, “Wahlburgers,” his series about a hamburger chain, has been renewed. Perhaps that’s because it’s the only show on television that makes the plot lines and acting on “Entourage” look believable.

The Black and Gold continue their run tonight at TD Garden. END_OF_DOCUMENT_TOKEN_TO_BE_REPLACED

Who will make the Class of 2018? END_OF_DOCUMENT_TOKEN_TO_BE_REPLACED

It’s been awhile since we talked Black and Gold. END_OF_DOCUMENT_TOKEN_TO_BE_REPLACED

You’re going to wish you were in the Northern Alps. END_OF_DOCUMENT_TOKEN_TO_BE_REPLACED

END_OF_DOCUMENT_TOKEN_TO_BE_REPLACED

Bill might be “on to Tennessee,” but we’re not. END_OF_DOCUMENT_TOKEN_TO_BE_REPLACED