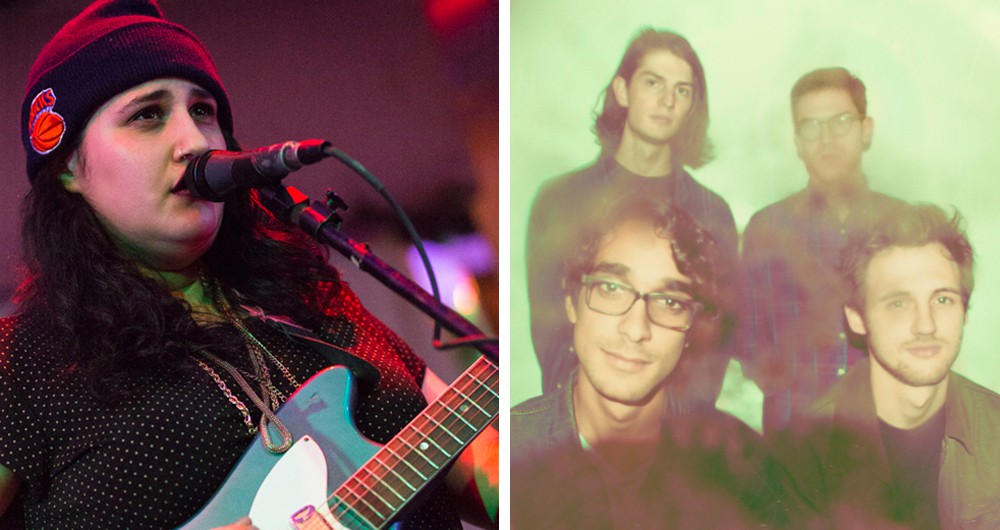 In some ways, Palehound has always had a home in Boston.

As a member of the ever-expanding Exploding In Sound stronghold, the group’s always had a large showing of support within the basement show crowd. In fact, plenty of chatter about the debut Bent Nail EP rolled long before they even played here. 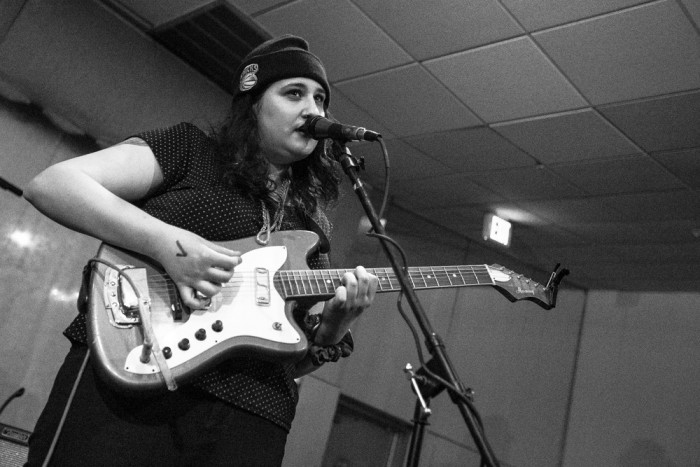 Of course, that was two lineup changes ago, back when the project served as merely the nom de plume of fronter Ellen Kempner. Perhaps that explains then how much of a non-event it was to see Kempner relocate to Boston permanently in August of 2014, and in turn, quickly begin playing shows. A tidy Facebook post summed up the big move as well as the recruitment of immense talents Jesse Weiss (Grass Is Green) and Nick Koechel (People Like You, Strange Mangers) to fill out the rhythm section. Just like that, Palehound was a Boston three-piece; it almost seemed inevitable.

“Boston has been embracing, almost maternally so, and a lot of that has to do with the fact that I quickly recruited two of the best dudes in Jesse and Nick,” says Kempner. “They are two of my closest buds now and really helped me get settled comfortably in such a small scene.”

Kempner’s move, boldly enough, was largely born out of a need to escape New York. Having grown up in Connecticut, Kempner spent time at Bronxville, NY’s Sarah Lawrence College. Ultimately, she found the experience emotionally draining as she worried about losing credit once the band’s profile took off. 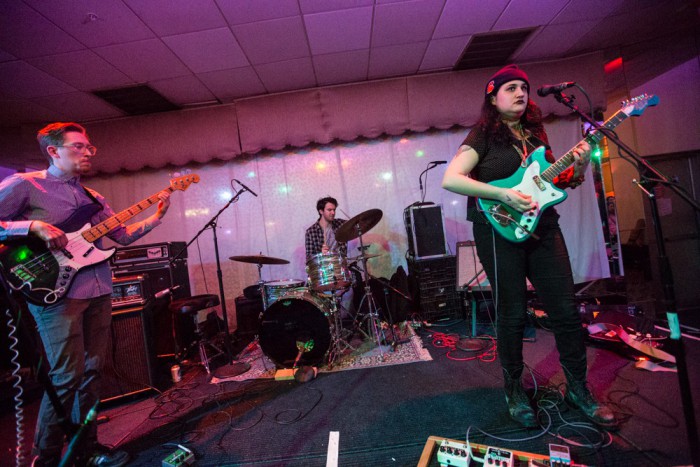 “I grew up in Connecticut and wanted to broaden my horizon past the New York metro area but still have it be accessible, so Boston seemed kind of obvious after some thought,” says Kempner.

In an act that speaks to the insane level of talent occupying the city, Kempner currently resides in Allston with Speedy Ortiz’s Sadie Dupuis. Having known Dupuis from years back certainly made the transition to a new city far easier for Kempner, especially since their daily TV rituals have remained unchanged. Ultimately, the move most affected the status of Palehound as a project.

“The move is a complete 180 for Palehound, mainly in that it lead to a total lineup change,” says Kempner. “On a personal level I definitely miss my New York bandmates. We had a really awesome time but the move put way too much stress on keeping a consistent band with that much distance.”

The personnel switch is one thing, but the location itself provides a change in perspective, too.

“Definitely wouldn’t say [Boston is] better or worse than New York just because it’s a significantly smaller and this differently natured scene,” says Kempner. “I will say though that I do feel more of a tighter knit community in the smaller scene here. It’s been awesome seeing the same people at shows [and] not having a million options on a Friday night.” 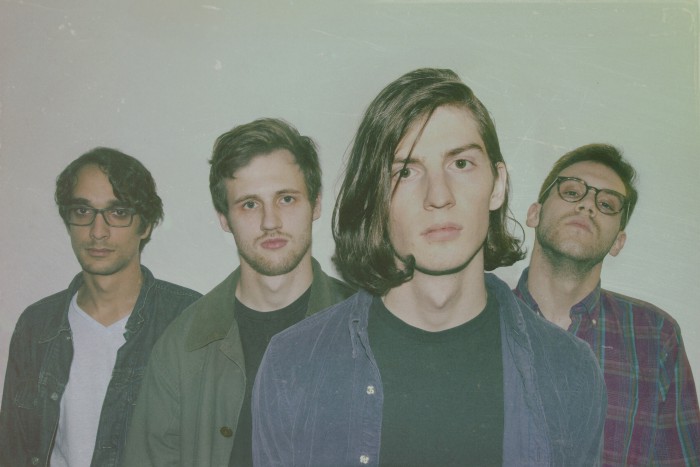 As is the way of universe, what Boston gained in Palehound it had originally lost in Infinity Girl, one of the luminaries of Boston’s familial noise-rock scene. While their departure ultimately set off some sort of strange chain reaction in which the Hub also lost Soccer Mom and Young Adults, their counteractive (in respect to Palehound) move from Boston to Brooklyn has also proven fruitful.

“I think the move helped us start to take it a bit more seriously,” says Infinity Girl’s Nolan Eley. “The fact that we all moved here and still want to continue making and playing music together was a sign to all of us that we should definitely go for it, so we’ve spent a lot of time making our next record, as opposed to the last EP.”

Not unlike Kempner, Infinity Girl’s transition was born lout of necessity. While bassist Mitchell Stewart was the first to ditch Boston in the winter of 2012, the rest of the band took their time. Eley and Kyle Oppenheimer followed suit in September of 2013 and were eventually joined by drummer Sebastian Modak in January of 2014 after finishing his Fulbright scholarship abroad in Botswana.

“It wasn’t necessarily a decision ‘for the band,’” says Eley. “It was kind of our individual life decisions coalescing into one place and time. Three quarters of us graduated with music degrees so New York was a good choice for us. It’s fortuitous that we’ve been able to continue with the band because we all just kind of ended up here.”

While the band has managed to make a home of New York, the shows came gradually, if at all. Knowing bands like Ovlov and having a solid track record from gigs back in Boston helped, but the sheer level of talent occupying their new home base proved daunting at first. Nowadays their biggest issue is making an event out of a show.

“Shows in New York tend to be a little more casual than they were in Boston simply because there are so many good shows in New York all the time,” says Eley. “In Boston I think we played a little bit less but every show was more of an event. Here we play more often and more casually.”

Naturally, Palehound and Infinity Girl shared a few bills back when Eley and co. were new to New York. Having run in some of the same circles through Exploding In Sound, they used each other as resources in one way or another.

“They were in more of a position to help us out with contacts and shows and we’re very thankful for that,” says Eley. “But we helped them learn how to play dice so I think we’re even.”

Perry Eaton writes for Boston.com. Perry Eaton talks on the radio with me from time to time. Today, he talked to me about what he’s been listening to and some upcoming shows and festivals worth checking out. Click here to read more. END_OF_DOCUMENT_TOKEN_TO_BE_REPLACED

Kal Marks is the kind of band that sneaks up on you. Whether you’re experiencing them at some basement show in Allston, or in an opening set for Pile at Great Scott, you may not see them coming, but they’ll immediately click. The combination of heavy sludgy riffs and lead singer Carl Shane’s unique crooning bowls you over. It’s dark and it’s compelling, but most importantly, it’s really earnest. END_OF_DOCUMENT_TOKEN_TO_BE_REPLACED

It’s not very often that some of the most talented performers in Boston are set to grace the same stage in a single night. This Sunday marks the 1 year anniversary of Mind Spray, a local hip-hop open mic and showcase series devised by promotion and booking company The Brain Trust. END_OF_DOCUMENT_TOKEN_TO_BE_REPLACED

There’s been a lot written about Street Dogs evicting a group of neo-Nazis from the pit at their House of Blues, Anaheim show on St. Patrick’s Day. You don’t need to read any of it. Just listen to front man Mike McColgan tell the story. He talks about joining his old band, Dropkick Murphys, on stage in Boston last week, too. END_OF_DOCUMENT_TOKEN_TO_BE_REPLACED

It’s not her best. END_OF_DOCUMENT_TOKEN_TO_BE_REPLACED

When in Nashville, do as the locals do. Since relocating to Tennessee a few months ago, this seems to have been Steven Tyler of Aerosmith’s approach after announcing in an October Twitter Q&A session that he intended to record a country album, an endeavor he’s well in the process of completing. END_OF_DOCUMENT_TOKEN_TO_BE_REPLACED

“I’m Shipping Up To Boston” just turned ten years old. Boston.com’s Matt Juul put this piece together on the history and significance of the Dropkick Murphys song, then joined me in studio to talk about it. END_OF_DOCUMENT_TOKEN_TO_BE_REPLACED

Boston is a city known for it’s Irish heritage, and it’s celebration of it. Two main traditions have held strong in Boston: the St. Patrick’s Day Breakfast and subsequent Parade. But I argue there is a third now: seeing the Dropkick Murphys at the House of Blues during their multi-night March Residency. END_OF_DOCUMENT_TOKEN_TO_BE_REPLACED

Sure, you might see a punk show on Monday and a chillwave band on Thursday and so on, but usually you favor one sound over another because you’re a busy bee and time is honey. It’s been the same for years, and the Prefab Messiahs can vouch. END_OF_DOCUMENT_TOKEN_TO_BE_REPLACED