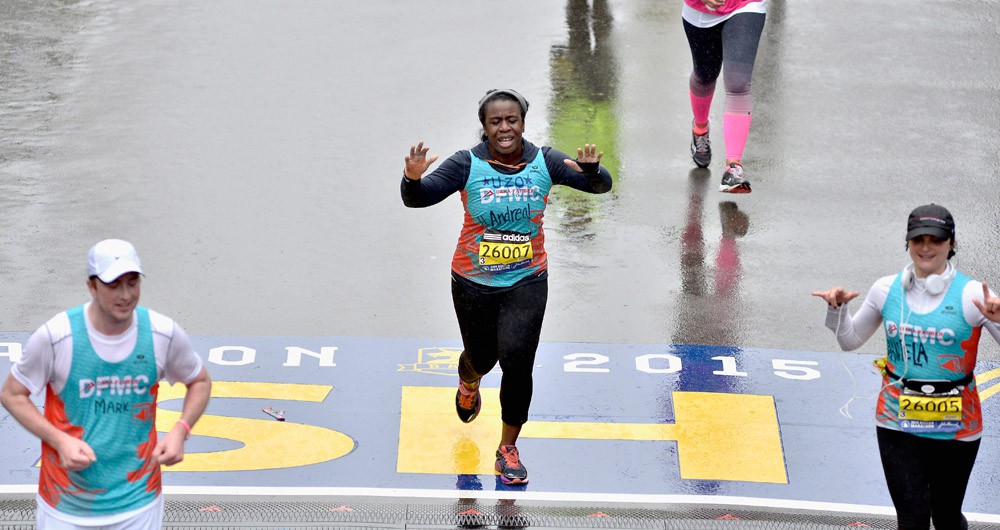 As we all begin to catch our breath from a spectacular marathon day, there’s one runner in particular you may have missed, completing the race in five hours and setting the bar for athleticism on the next season of Orange is the New Black. Medfield native and BU alumna Uzo Aduba, noted for her performance as Susanne “Crazy Eyes” Warren on the Netflix breakout hit, completed the marathon (her second ever) with an impressive 05:01:00, averaging about a twelve minute mile.

Like many on the course yesterday, Aduba was not just running for herself. The actress ran for the Dana Farber Cancer Institute, an organization she has raised over $10,000 for the Claudia Adams Barr Program in Innovative Basic Cancer Research, which aims to investigate cancer’s causes. After losing family friend and “second mother” Andrea Trasher to breast cancer last October and her own deep-laid roots in Boston, running the marathon just made sense.

Aduba spoke to Women’s Health on her motivation to run the Boston Marathon for Trasher after completing the 2013 New York Marathon, and the support she received from her OITNB castmates.

Trasher had supporter Aduba throughout her childhood as a neighborhood friend while the young actress’s parents worked around the clock, because “she believes in me,” Aduba explained.

Way to go @UzoAduba and team! You all reached mile 25 like it was nothing! #DFMC #BostonMarathon pic.twitter.com/H4ksClR2Fw

The actress noted that fellow OITNB castmate and Boston native Taylor Schilling was bubbling over with excitement for her friend.

“She has just been so supportive,” Aduba said. “Thursday, she texted me, ‘How’s it going? How are you feeling? Getting excited?’ Because we’re Boston girls, she and I.”

Though Aduba didn’t listen to music for the majority of the race to embrace the experience and stay focused, she did listen to “Brave” by Sara Bareilles when crossing the finish line – that was the most-played song on Andrea Trasher’s iPod when she passed in October, and a testament to the reason Aduba did it all.

Enter to win a pair of tickets to attend The Hess Collection Seminar and Dinner as part of Boston Wine Festival 2018 at the Boston Harbor Hotel on Wednesday, March 14th. END_OF_DOCUMENT_TOKEN_TO_BE_REPLACED

Always a pleasure to have Boston.com’s Perry Eaton in studio for a chat. After we talked a bit about Pearl Jam at Fenway and Perry’s new podcast, he filled us in on Game of Thrones live and Narragansett’s new Bananagrams-themed brew. END_OF_DOCUMENT_TOKEN_TO_BE_REPLACED

No, not from afar, from the comfort of her couch. From the actual awards themselves. That’s where Meredith Goldstein was for the Oscars. She shared all the juicy, first-hand details with me. END_OF_DOCUMENT_TOKEN_TO_BE_REPLACED

It was wonderful having our good friend Meredith Goldstein back in studio this morning. She dug into the latest edition of Love Letters, which prompted us to play this song. And of course we had to discuss the Oscars. Make sure you’re following Meredith on Twitter, as she’ll be live-tweeting the awards this Sunday night. END_OF_DOCUMENT_TOKEN_TO_BE_REPLACED