On new album, transgender Against Me! singer finally reveals true self 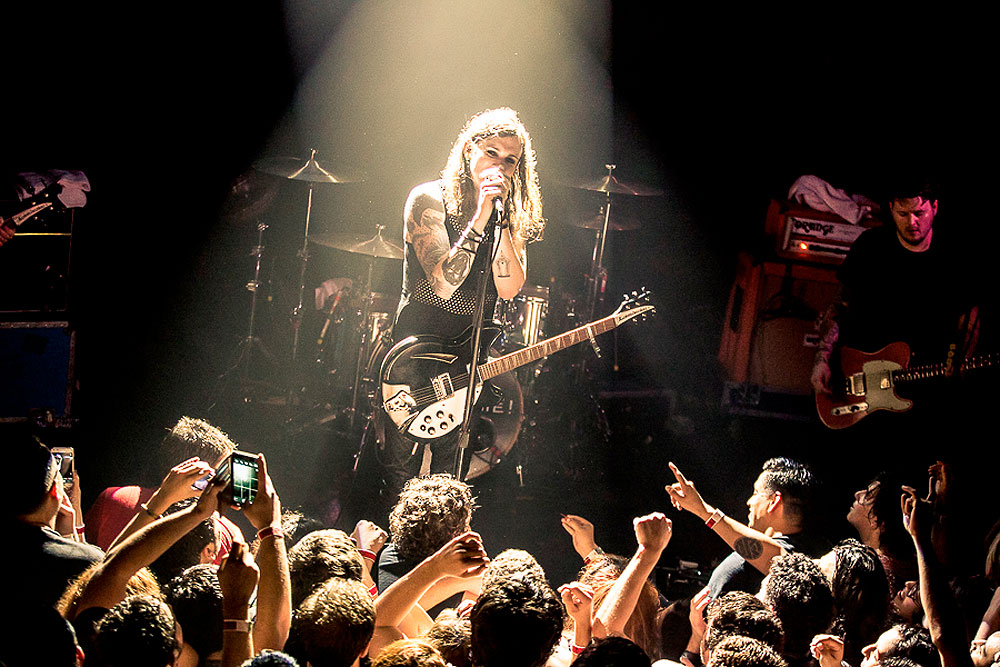 Especially in its earlier days, there was something aggressively masculine about the punk band Against Me! Yes, the group preached inclusive, radical politics. Still, Tom Gabel’s screaming, jagged vocals delivering searing lines like, “Can anyone tell me why God won’t speak to me?/Why Jesus never called on me to part the fucking seas?,” called to mind the bloodied revolutionary, the punk prophet growling his heart out at underground shows in basements (which was, of course, exactly how the band built a following in the late ’90s and early 2000s). Our culture informs us from a young age that these figures (typically) are men.

That’s one of the reasons it was such a big deal when Gabel announced via a 2012 Rolling Stone feature that he would start identifying as Laura Jane Grace, that hormone therapy and electrolysis treatment would pave the way for eventual surgical transition to female.

There had been hints of Grace’s struggles with gender dysphoria in past Against Me! albums – some of them far from subtle. In “The Ocean,” the last track on “New Wave,” she sang: “If I could have chosen, I would have been born a woman/My mother once told me she would have named me Laura.” “Searching for a Former Clarity,” perhaps the group’s most raw and heartbreaking song, is about a dying musician who dressed up in women’s clothes as a child.

But in Against Me!’s new album, “Transgender Dysphoria Blues,” which was released last month, it’s all out in the open. It would be wrong to say the album’s not political — what could be more political than trying to gain acceptance, to figure out where one fits in society? But it’s an inwardly-focused brand of politics. There’s little of the antiwar (or anti-Condoleeza) rhetoric of past albums. The forces that had been roiling in Grace for so long, that had only seen expression in one album-ending track here, one album-ending track there, are now free to dictate the tone of the music, and the result is powerful. This is an album about her and her journey.

The title track, which kicks off the album, is the strongest, partially because it so clearly helps cisgendered listeners understand what life has been like for Grace. She sings:

It’s a powerful divide. In one breath, Grace expresses the simple desire to be seen as a pretty girl; in the next, she makes it clear just how impossible this is. To the people who see her, she’s not a woman — she’s a contagion.

That notion of wanting what is unattainable comes up throughout the album. “Even if your love was unconditional/That still wouldn’t be enough to save me,” she sings on “Unconditional Love” (an interesting line given that Grace’s wife, Heather, has been supportive throughout her transition). In “Drinking with the Jocks,” she thinks back to high school: “All of my life, all of my life/wishing I was one of them” — “them” being the titular skirt-chasing, gay-bashing jocks. But again, reality tramples this fantasy of effortlessly fitting in, “There will always be a difference/between me and you.”

Musically, the album isn’t a huge departure from Against Me!’s last few efforts. If you think the band has gotten slightly too slick in its recent releases, this won’t change your mind. If you miss the rawness of “Reinventing Axl Rose” but think the band has, for the most part, successfully transitioned to a more “mature” sound (I’m in this camp), you will enjoy this album.

Unlike most album releases, though, the music is only a small part of the story here. It’s been very interesting watching the reaction online. Simply put, the haters appear to have been drowned out by a wave of support on Twitter and elsewhere (read Grace’s recent Ask Me Anything on Reddit — unlike the many phoned-in AMAs that litter the site, she was extremely open and honest). Suffice it to say, there are people out there uncomfortable with Grace’s transition, but they’re keeping quiet. That’s a good thing.

Enter to win tickets to see Trio Da Kali at The Villa Victoria Center of the Arts (Newton, MA) on April 10th. END_OF_DOCUMENT_TOKEN_TO_BE_REPLACED

END_OF_DOCUMENT_TOKEN_TO_BE_REPLACED

Enter to win tickets to Rhye at The Paradise on February 28th. END_OF_DOCUMENT_TOKEN_TO_BE_REPLACED

Her new album has been pushed back, but we have Kimbra’s new single for you. END_OF_DOCUMENT_TOKEN_TO_BE_REPLACED

The folk duo returns with a new record this week. END_OF_DOCUMENT_TOKEN_TO_BE_REPLACED

Now that we’re done looking back at 2017, let’s look ahead at 2018. END_OF_DOCUMENT_TOKEN_TO_BE_REPLACED

Our first Song of the Week for 2018. END_OF_DOCUMENT_TOKEN_TO_BE_REPLACED

In a year when so many things were off, the music was right on. END_OF_DOCUMENT_TOKEN_TO_BE_REPLACED