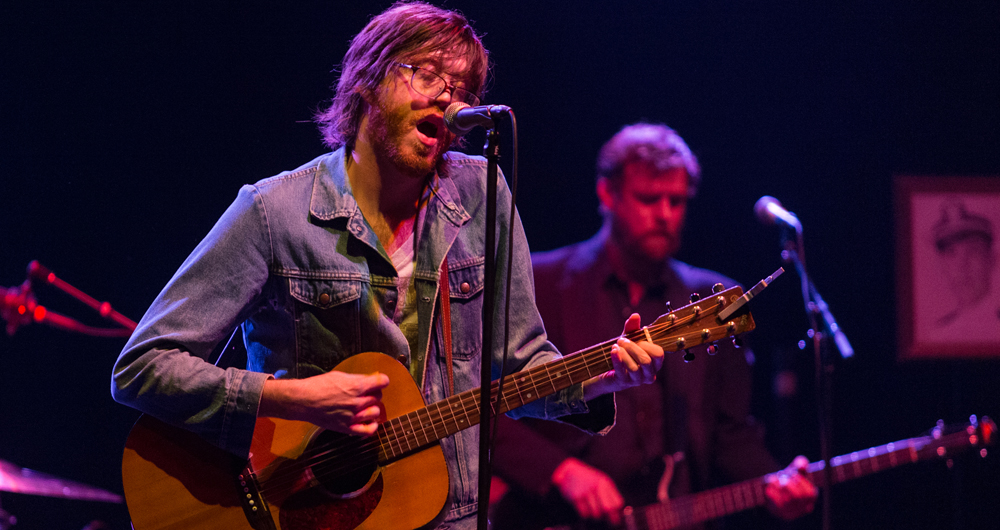 When New Hampshire-born Will Sheff, frontman of veteran folk rockers Okkervil River, returns to Boston to play The Sinclair on Saturday, he’ll once again be performing in a mid-size venue to fans, relatives and old friends. This time, though, he’s returning to New England in support of an album inspired by his hometown, Meriden, New Hampshire, and his youth. “The Silver Gymnasium,” a nostalgic autobiography of a ten year-old Sheff in 1986, continues Okkervil River’s legacy as introspective, niche, career musicians. If Okkervil River don’t ever break mainstream — and if Sheff has a say, they may not want to — this album does put the frontman’s small town on the map.

“I always wanted to write about Meriden,” Sheff said. “I love New England and I think a lot about how it’s portrayed. I wanted to brand [the album] as New England. You have the Boss out of New Jersey, Wu-Tang Clan out of New York. I wanted one for New England.”

Growing up, Sheff certainly wasn’t a star in his town. Before fronting Okkervil River, he was just a shy, weird kid living in a tiny, rural town in central New Hampshire. Regardless, he’s always loved his hometown.

“You feel a strong connection to wherever you grow up,” Sheff explained. “It’s not uncommon to have painful aspects, as well as good ones. As it’s so small, with the slightest difference, you feel like a freak.”

The 37 year-old Sheff has made the most of his eccentricities in his time since Meriden, producing critically acclaimed albums, touring the globe, cultivating a devoted fanbase and charting on the Billboard 200 four times. It goes without saying that these are quite the accomplishments for a small town boy from New Hampshire. “Boston’s the first city that I went ever went to. It was a mind-blowing experience to go to a city,” Sheff remembered.

“The Silver Gymnasium,” is Okkervil River’s first release on ATO Records (home of Primus, My Morning Jacket), and arguably more accessible than 2011’s “I Am Very Far,” which Sheff calls ‘really spiky.’ This album, the band’s seventh, goes back to basics, relying on bright pop (“It Was My Season”) and catchy, campfire twang (“White”).

“I don’t really think about that stuff too much. Sometimes, I make a more accessible record, but they’re usually for artistic reasons… There are different ways of being accessible. You have on one hand Bruce Springsteen, and on the other hand, Philip Phillips. Is he popular? I talked shit about him on Twitter and people came after me.”

For Sheff, accessibility — and success — has never been a high priority. “My goal is to fail. At a certain point, I started to get more successful and I thought, how far can I take this? Because, the [more popular] you get, the slower you’ll fall when you’re dead… in pursuit of trying to be that huge, you can lose sight of why you like music.”

Even at a time when folk rock acts like The Lumineers and Of Monsters and Men have hit mainstream success?

“I don’t think that I would want that kind of success. It feels like a really wide ocean that’s an inch deep,” Sheff said. The frontman does realize that his opinion might just be circumstantial “I’d rather be very meaningful of a smaller number of people. I think that’s my fate, so maybe I’m accepting of fate.”

By the end of the phone conversation, one thing is clear though. Will Sheff is not looking to music for stardom.

“The reputation of stars like Justin Bieber is that they’re not deserving, but they work really hard. I don’t want to work as hard as Justin Bieber or Beyonce. Being a human, and my relationships with friends and family are more important to me,” Sheff said.

Enter to win tickets to see Trio Da Kali at The Villa Victoria Center of the Arts (Newton, MA) on April 10th. END_OF_DOCUMENT_TOKEN_TO_BE_REPLACED

END_OF_DOCUMENT_TOKEN_TO_BE_REPLACED

Enter to win tickets to Rhye at The Paradise on February 28th. END_OF_DOCUMENT_TOKEN_TO_BE_REPLACED

END_OF_DOCUMENT_TOKEN_TO_BE_REPLACED

Enter to win a pair of tickets to attend The Hess Collection Seminar and Dinner as part of Boston Wine Festival 2018 at the Boston Harbor Hotel on Wednesday, March 14th. END_OF_DOCUMENT_TOKEN_TO_BE_REPLACED

Her new album has been pushed back, but we have Kimbra’s new single for you. END_OF_DOCUMENT_TOKEN_TO_BE_REPLACED

The folk duo returns with a new record this week. END_OF_DOCUMENT_TOKEN_TO_BE_REPLACED

Now that we’re done looking back at 2017, let’s look ahead at 2018. END_OF_DOCUMENT_TOKEN_TO_BE_REPLACED