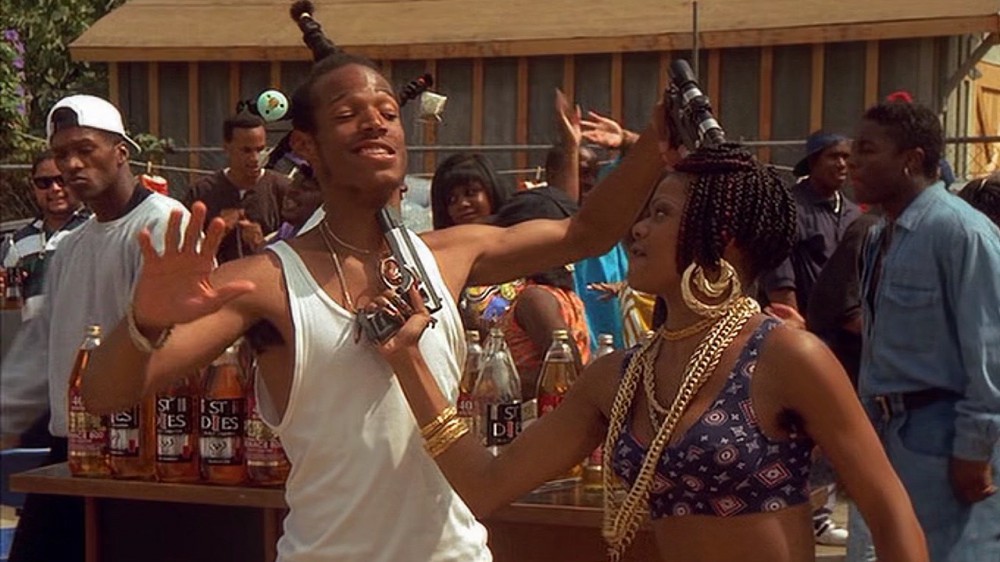 Get that hefty buzz on, carve out that extra-large slice of sofa space, sprawl out, scarf some greasy snacks, and decompress with these reefer-related flicks.

Leave it to the Wayans brothers to make a parody on really dramatic movies like “Boyz N the Hood”. The movie, filled with very obvious spoofery follows Ashtray (Shawn Wayans), who comes to South Central L.A. and wants more from his life than hanging out with his cousin Super Soaker bearing Loc Dog (Marlon Wayans). Eventually he finds true love with poetic but promiscuous Daishiki.

A bit of a mess, but seriously one of the best in Adam Sandler and Brendan Fraser’s catalogs, not to forget one of Steve Buscemi’s best performances before hitting the big time. Looking for a break, the trio – a terrible hair metal band called The Lost Rangers – holds a radio station hostage

A drug-fueled adventure film starring Michael Cera as Jaime, a drug-addled twenty-something who is visiting Chile with the sole intention of drinking the juice of the San Pedro cactus, which is known for its powerful hallucinogenic effects. He and Crystal Fairy (Gaby Hoffman) are foils of each other; they will both get on your nerves for different reasons.

Snoop Dogg, Dr. Dre and their buddies take it all in stride — if they were any more laid-back in this movie, they’d be napping in their trailers.

This was the Hunter S. Thompson movie before Terry Gilliam decided to do his version. It’s a hilarious series of episodic vignettes based on several of Thompson’s stories instead of being an adaptation of just one. Bill Murray rocks and his relationship in the movie with Thompson’s Chicano lawyer “Carl Lazlo Esq.” during his attempt to cover Super Bowl the ’72 Presidential Campaign, makes for some crazy shenanigans.

A smoky and heartfelt comedy about two young people, a love affair, American life, Brooklyn and – of course – weed.

Be prepared: Humboldt County is a slow starter. It may seem like a cliched, uptight-nerd-liberated-by-free-sprited-folks type of movie, but it eventually evolves into something deeper and more resonant. So much pot is smoked in the movie that you could make up a “smoking game”, take a bong rip every time they do.

The original cautionary propaganda stunt against pot-smoking. The tale features a fictionalized and highly exaggerated take on the use of marijuana, where a trio of drug dealers lead innocent teenagers to become addicted to “reefer” cigarettes by holding wild parties with jazz music, OH NO!

Watching these OG stoners get themselves into unpredictable and ridiculous situations never gets old. Órale.

Golden Globe and Emmy nominee Benjamin Wallfisch is the composer responsible for the score of the hit movie IT. I talked to Ben about his approach to scoring the new version of this iconic story and his thoughts on film and music overall. Some very insightful commentary; listen in. END_OF_DOCUMENT_TOKEN_TO_BE_REPLACED

Rupert Gregson-Williams is an award-winning film composer. He just so happened to compose the score for this summer’s big blockbuster Wonder Woman. We talked about his beginnings in film scoring, film scores that move and inspire him and, of course, Wonder Woman. END_OF_DOCUMENT_TOKEN_TO_BE_REPLACED

Jeff Rapsis is a New England-based composer and performer. Lately, he’s been creating live musical scores for silent film screenings. I talked to him about his process and a few of his upcoming performances at The Capitol Theatre in Arlington and the Somerville Theatre. You can keep track of where else Jeff is scoring silent films here. END_OF_DOCUMENT_TOKEN_TO_BE_REPLACED

Planning on seeing Rogue One: A Star Wars Story when it opens this weekend? I joined Adam 12 to give you an idea of what to expect. But don’t worry, I didn’t give anything away. END_OF_DOCUMENT_TOKEN_TO_BE_REPLACED

No, not from afar, from the comfort of her couch. From the actual awards themselves. That’s where Meredith Goldstein was for the Oscars. She shared all the juicy, first-hand details with me. END_OF_DOCUMENT_TOKEN_TO_BE_REPLACED

To celebrate the opening of ‘The Force Awakens,’ I had some very special guests in studio to start the Thursday, December 17 edition of The Brink. Listen. END_OF_DOCUMENT_TOKEN_TO_BE_REPLACED

Watching the new Star Wars trailer a million times gave us all sorts of feels. And one of those feels was nostalgia. END_OF_DOCUMENT_TOKEN_TO_BE_REPLACED

END_OF_DOCUMENT_TOKEN_TO_BE_REPLACED

If you’ve finally finished crying over Inside Out — or Lava, the short that ran before it — Pixar is readying another assault on your tear ducts with The Good Dinosaur, if its newly released trailer is any indication. END_OF_DOCUMENT_TOKEN_TO_BE_REPLACED