Nothing’s Dominic Palermo Can’t Sugarcoat the Past, but the Present Is Looking Pretty Sweet 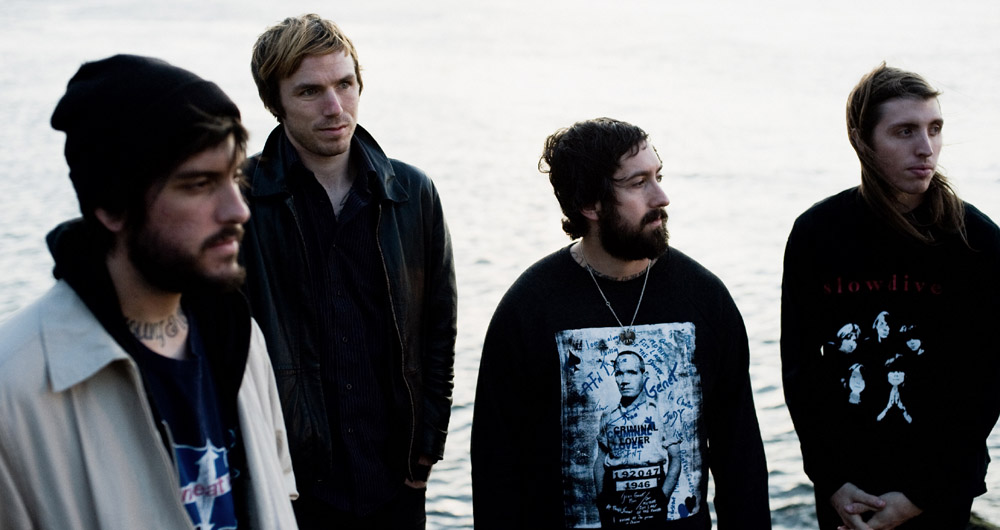 Excluding household names who could care less what some blogger writes about them, musicians generally present themselves as half-full glasses while talking to reporters. They might say their tour is going swell even if their bass player’s horse tranquilizer habit is rearing its ugly head and the opening act is engaging in open, belligerent mutiny. They might say a new album they’re not happy with is the best thing they’ve ever done. They might talk to a stranger for longer and with far more enthusiasm than they normally would.

And that’s the way it should be. Complete honesty and effective self-marketing only occupy the same space on the rarest occasions. In fairness, Dominic Palermo happens to be touring behind the lightless sludgegaze triumph “Guilty of Everything,” and need not bullshit to convince anyone he’s doing spiffy. Still, it’s pretty refreshing to talk to a rock star-ish dude who candidly accuses the Pitchfork reviewer who pishawed his album of hackery, muses that hardcore reunion tours are good for a payday and little else, and notes that without music to play, he would blow his own brains out. Dude’s hardly all lollipops and happy puppies and sunshine.

“I keep screaming at horses,” the Philly-bred mastermind of Nothing tells me, piloting the tour van between the mountains of Montana and Wyoming. Appropriately, Nothing finds itself in the middle of nowhere. “They’re, like, standing near the side of the road. The van goes by, I yell at them, and they get scared.”

If they’re afraid of yelling, these wild steeds would find Palermo’s old band, Horror Show, extremely startling. Horror Show thrived amid the early ‘00s hardcore boom, but the aggression that served Palermo so well on stage caused problems in the real world. An aggravated assault and murder wrap famously cost him 2002 through 2004. Following his release from prison, he continued dabbling in various low-maintenance projects – most notably Wesley Eisold’s experimental outlet XO Skeletons – but didn’t hurl himself into the proverbial slam pit of devoted musicianhood again until the 2011 genesis of Nothing.

As if firebombing to compensate for lost time, Palermo and guitarist Brandon Setta split their time between Nothing and crepuscular goth faction Death Of Lovers.  They also cranked out the seemingly painstaking “Guilty of Everything” in a month of 10-to-12 hour daily stretches of Adderall and red wine-fueled delirium.

Effective shoegaze records, like “Guilty,” tend to conjure the dissociative mental static known well to those who haven’t slept in days and couldn’t take a nap if they wanted to. But the genre’s not necessarily known for the steadily lumbering through a muck of sheer heaviness intermittently audible on “Guilty.” Though he figures hardcore’s breakneck onslaught is a task best left to young’uns, it appears Palermo hasn’t put the pugnacious side of his creativity entirely behind him.

“I hope that, one day, our shows will be somewhere between what they are now and what Horror Show sets used to be,” he says. “I like to see people freak out ‘n shit. Nobody wants to fucking [play for people who just] stand around with their arms folded watching a fucking band. It’s just punishing. I don’t know how bands do it.”

Anyone with a penchant for heavy music would require a specific, veiled nihilism to scope out Nothing at Great Scott on Thursday without thrashing about a bit. But let’s not confuse nihilism with cynicism here. After all, the biggest cynics in the world like to dance as much as anybody.

“To be any kind of artist that I would pay attention to…..I hate the ‘nihilistic’ term. It’s hard to take anyone seriously when they don’t think anything exists, y’know? But cynicism, from my perspective anyway, that’s definitely a necessity.”

Enter to win tickets to see Trio Da Kali at The Villa Victoria Center of the Arts (Newton, MA) on April 10th. END_OF_DOCUMENT_TOKEN_TO_BE_REPLACED

END_OF_DOCUMENT_TOKEN_TO_BE_REPLACED

Enter to win tickets to Rhye at The Paradise on February 28th. END_OF_DOCUMENT_TOKEN_TO_BE_REPLACED

END_OF_DOCUMENT_TOKEN_TO_BE_REPLACED

Enter to win a pair of tickets to attend The Hess Collection Seminar and Dinner as part of Boston Wine Festival 2018 at the Boston Harbor Hotel on Wednesday, March 14th. END_OF_DOCUMENT_TOKEN_TO_BE_REPLACED

Her new album has been pushed back, but we have Kimbra’s new single for you. END_OF_DOCUMENT_TOKEN_TO_BE_REPLACED

The folk duo returns with a new record this week. END_OF_DOCUMENT_TOKEN_TO_BE_REPLACED

Now that we’re done looking back at 2017, let’s look ahead at 2018. END_OF_DOCUMENT_TOKEN_TO_BE_REPLACED