There aren’t many Red Sox fans in New York City, but Noah Baumbach is one of them.

The director isn’t afraid to rock his team’s colors around town and has been known to pester fans at Yankee Stadium from time to time.

Baumbach was in Boston last week promoting his new movie While We’re Young, and he spoke with us about the new film, how he became a member of Red Sox Nation, and more.

You’re from New York, but I’ve read that you love the Red Sox. How did that happen?

It got me in a lot of trouble growing up, but the way the story goes is my father was a Brooklyn Dodgers fan. When the Dodgers moved, he became a Mets fan when the Mets started. I was a Mets fan when I was a kid, but at a certain point, I wanted to kind of pick my own team and the Mets were terrible in the ’70s. Then they got good, and then they got bad again. But my dad hated the Yankees, so I hated the Yankees because Dodgers fans and Mets fans hated the Yankees. So I became a Red Sox fan because, at that time, the Mets and the Red Sox could kind of bond on being sort of underdogs in some ways.

Yeah, then when ’86 happened I was like, “Why did I do it this way?” I would have so much have rather been on the right side of this. Of course, now winning World Series is common place [for the Red Sox].

Have you ever tried wearing a Red Sox hat around New York City?

I did as a kid all the time and I would get into trouble. I’d sort of court it. I’d go to Yankees games and I’d root loudly. I’m actually quite invested in the Red Sox, but I feel that there’s kind of a small subculture of New Yorker Red Sox fans. You find them. Roger Angell, who writes for The New Yorker and wrote a lot about baseball, he’s a Red Sox fan and he was a New Yorker. I feel that you find each other.

The Brattle Theater just held a marathon of your movies in honor of the 20th anniversary of Kicking and Screaming, your first feature film. Does it feel like 20 years have gone by?

In While We’re Young, Ben Stiller’s character shares a few similarities with you, in that he’s a middle-aged filmmaker living in New York. He seems to be going through a mid-life crisis, though. Have you ever had a moment of crisis in your life that made you want to change things up?

I’ve definitely had bumps in my life, but I would say more regularly I feel like Jamie (Adam Driver’s character) in that way. I feel like I’m more productive and ambitious than Ben’s character in the movie. I’m interested in people who are stuck and a lot of my movies seem to have these people who are having trouble getting out of their own way. I think it’s a source of humor, but I have empathy for these people and I also don’t think it’s uncommon. Even the most successful people I know will find ways to create trouble for themselves, in some way or another. It’s sort of human nature. 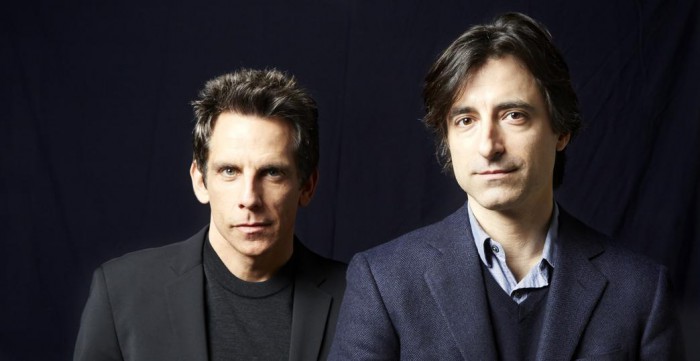 When you get that feeling of being stuck, what do you do to shake yourself out of that mindset?

When I’m writing a new script every time out, because I generate what I direct, you can’t use the last 50 pages of the other script. You have to start again. It’s very difficult and it feels like some things have gotten easier, but some things haven’t. Each time out I’m thinking, “This will never get done. What am I thinking? I’ve got to generate an entire movie here out of nothing?”

In terms of how I deal with it, I just suffer, but keep pushing ahead. Some days things feel inspired with whatever you’re doing or writing. It’s like everything just feels intuitive and you’ve got it going. Other days, you’ve got to force yourself to write because you don’t feel like anything you’re doing is any good at all. Those days are as much a part of it as they days where it’s like, what is it, Anthony Michael Hall in The Breakfast Club, where he gives himself that little thing on the arm like, “I’m good.”

As a writer, nothing is more frustrating than when you feel like nothing is working.

No it’s terrible! I don’t feel like anything you’ve done before makes you feel any better about it. It’s like the first time all over again.

One of my favorite sequences in your new film is the ayahuasca ceremony, which you shot pretty straight as opposed to doing any trippy drug scene clichés. How did you hear about ayahuasca and what made you shoot that sequence in that way?

I’d heard about it, I guess initially in Los Angeles, I knew people who had done it. When I started writing the script, I didn’t even know anyone in Brooklyn who was doing it. By the time we made the movie, it was like huge, probably even bigger now. Now I know many people who have done it or have attempted to do it. It’s really around, I don’t know what it’s like [in Boston]. I’ve never done it, but I guess my approach to some of these things is, I like observing characters in their environment. I felt like, even if they are tripping or having this thing, it was in some ways funnier to me if we just watched them rather than indulge in their point of view, which could be funny in another way, but it’s not how I tend to do it. It felt like the right way to observe it. It’s tempting to do some kind of funny, visual thing, but it felt more right for the movie if we just watch them with a sort of detachment.

Ben’s character, in some ways, wants to be a mentor to Adam’s character, who is a budding young director himself. Is there any advice you wish you had when you were a young filmmaker?

My 20s, I felt like time was moving fast and I needed to kind of accomplish quickly. Looking back at it, in retrospect, that’s of course not the case, and you have time. My advice always to filmmakers is… you can’t give advice to someone you don’t know and it’s all so personal and specific. There’s so many different paths to get into movies, there really are. But the general thing is just to go make a movie.

The Black and Gold continue their run tonight at TD Garden. END_OF_DOCUMENT_TOKEN_TO_BE_REPLACED

Who will make the Class of 2018? END_OF_DOCUMENT_TOKEN_TO_BE_REPLACED

It’s been awhile since we talked Black and Gold. END_OF_DOCUMENT_TOKEN_TO_BE_REPLACED

You’re going to wish you were in the Northern Alps. END_OF_DOCUMENT_TOKEN_TO_BE_REPLACED

END_OF_DOCUMENT_TOKEN_TO_BE_REPLACED

Bill might be “on to Tennessee,” but we’re not. END_OF_DOCUMENT_TOKEN_TO_BE_REPLACED