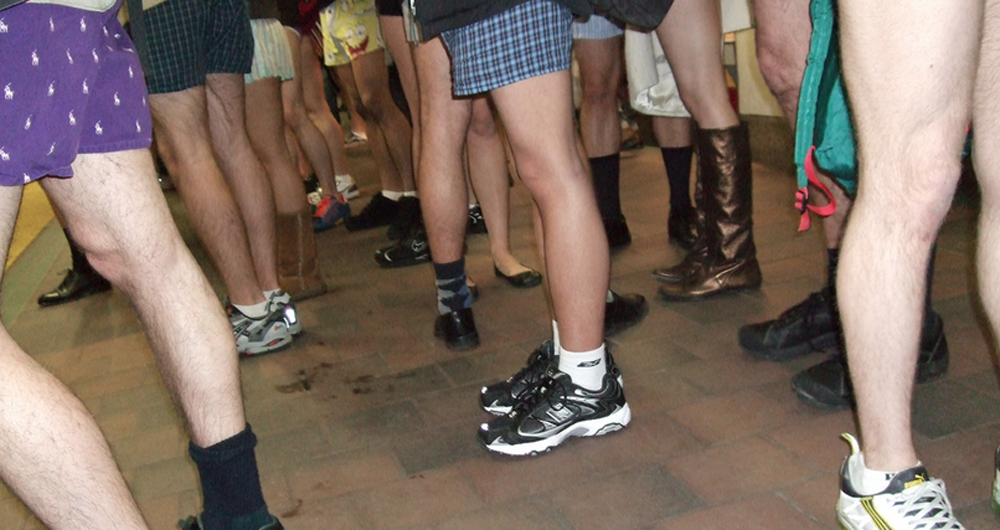 When schools are closing just because it’s cold, it means it’s pretty cold, but it also means you need to go out — to prove it doesn’t bother you, sure, but also to complain about how it took a lot more than that to close school back in your day. Here’s where to party like you’re at a summer music festival, ride the T with no pants, and generally throw a big double middle finger right in winter’s stupid face.

The Lilypad in Inman Square brings back its African Music Night showcase this week. Every Thursday in January, Kina Zoré will share the stage with some of the best local artists performing music from all over the African continent. So if you have a really funny Ebola joke, make sure you wait for a band specifically play the music of West Africa, and then keep it to yourself anyways because it’s not hilarious, it’s inappropriate and I really thought you were going to do better this year. (10 p.m., $10, all ages)
The closing of the South End’s beloved Factory Theatre left its resident small theater companies scrambling to find new spaces. Fresh Ink Theatre brings the intense, post-apocalyptic sci-fi fable “Chalk” to the Boston Playwrights Theatre, opening Friday and running through January 24. Maggie is stuck in an abandoned building with nearly unlimited supplies, a broken radio and a book of spells, surrounded by monsters. But when her daughter reappears, Maggie can’t celebrate because something is not quite right. The two women square off with both their lives hanging in the balance, and all that keeps them separate is a razor-thin chalk circle, hastily drawn on the floor. (8 p.m., $20, all ages)

Even in our maximalist society, sometimes mini is better — at least when it comes to horses, golf, and for a few MIT kids, musical instruments. The MIT Museum’s Second Fridays: Small Instruments welcomes composer, musician and instrument builder Pawel Romanczuk and his top-of-the-line team of MIT students, showcasing the unique musical compositions and mini-instruments they have created. You know who else loves their tiny instruments? Roadies. (Just kidding. They don’t have roadies.) (5 p.m., $5, all ages)

If you were too busy “exercising” and “going outside” and “living your own life instead of a fictional story” then you missed a pretty good year at the movies. Two hours in a warm, dark room sounds pretty good when it’s nine degrees outside, so catch up on what you missed at the Brattle Theater’s (Some of) The Best of 2014 series, beginning tonight with Wes Anderson’s “The Grand Budapest Hotel” (saw it, would recommend) and showcasing the rest of the year’s weird and wonderful cinema through January 22. Also opening Friday at the Coolidge Corner Theater, Paul Thomas Anderson’s “Inherent Vice,” adapted from the Thomas Pynchon novel. Still no sign of a “Gravity’s Rainbow” movie so you don’t have to worry about people calling you out on keeping it on your bookshelf but never getting around to reading it. (Various times and prices, all ages)

Returning to Club Passim for a 12th year this weekend, BCMFest stands for the Boston Celtic Music Festival. I sure hope those guys are better at music than they are at playing basketball! There are no lottery picks for being the worst band. Just kidding, it’s the hard-”c” Celtic, which is why the three-day festival showcases Greater Boston’s best musicians, singers, and dancers from Irish, Scottish, Cape Breton, and other Celtic traditions. (7 p.m., $15, all ages)

The only time we want to hear the phrase “wintry mix” for the next three months is in reference to a variety pack of local seasonal beers. Aeronaut Brewing Company’s Winter Seasonal Folk Festival celebrates a beer release with performances by Patrick Coman, Peter Parcek, Ryan Fitzsimmons and The Autumn Hollow Band, plus the Clover Food Truck keeping bellies full. (2 p.m., FREE, 21+)

Just a quick heads up about some pants down on the T: Sunday afternoon is the annual No Pants Subway Ride and Sans-Pants After Party, because there’s nothing like a little French to class up an event that combines ironic performance art with public indecency. Sometimes on especially cold days your pants get really cold and keep bumping against your legs, so in a way, taking them off keeps you warmer. But in another, much more real way it’s stupid and dangerous and older people will be concerned for your safety. (2 p.m., FREE, all ages)