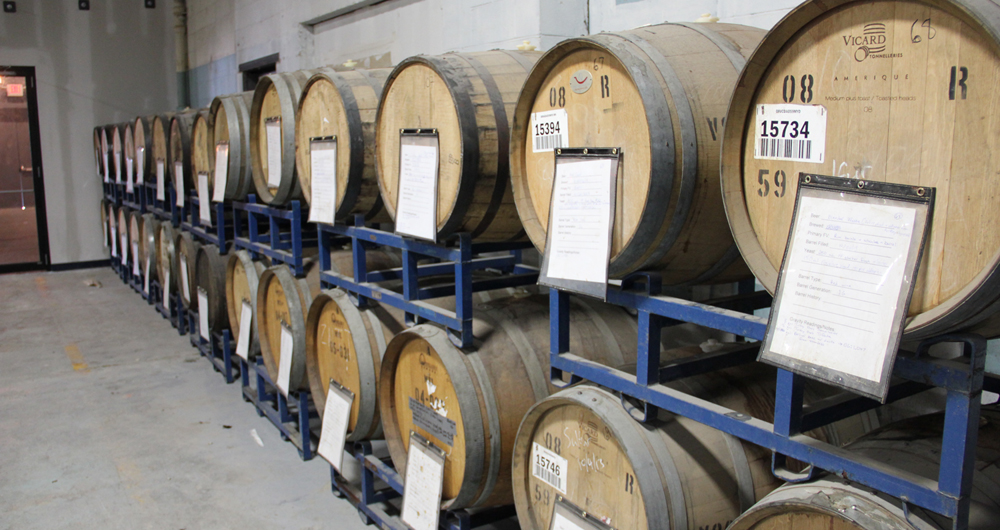 Everett’s Night Shift Brewing – makers of beer with quirky, offbeat ingredients – is set to open its new taproom and brewery tomorrow, the 22nd from 3 p.m. to 10 p.m., with a slew of cellared favorites, regulars, and new offerings.

If you’ve ever ventured to Night Shift’s current location, a stone’s throw from the Revere Beach Parkway, saying it’s a little difficult to find is a bit of an understatement.

If you’ve never been before, you’re double-checking GPS directions and crossing your fingers that you’re actually parked somewhere you won’t get towed. Even when you think you’ve arrived at the brewery at 15 Charlton St., it’s the opposite of what you would expect. The area is ripe with industrial decay. To the left, a dumpster, stacked high with old, rusty radiators, to the right a ratty, old stained couch.

It’s only once you spot the brewery’s iconic owl logo on a gray door that you realize you’ve found the right place.

With the new brewery, things associated with that Charlton location (the parking nightmares, the building’s sketchy bathrooms and the threat of urban expansion looming overhead) are soon be a distant memory.

When asked what exactly he’s looking forward to the most about the move, Michael Oxton, one of the brewery’s co-founders, had a hard time choosing.

“There are too many things to count, honestly,” Oxton said, two weeks ago during a sneak preview for BDCwire. “There’s parking for our customers, a huge production space, capacity to grow, a gorgeous, spacious taproom, lots of space for barrels, a loading dock… there’s very little I’m not excited about.”

For a while now – minus the rare delivery at Julio’s Liquors in Northborough – it was difficult to even find a bottle of one of their beers outside the 128 loop.

That may soon change. 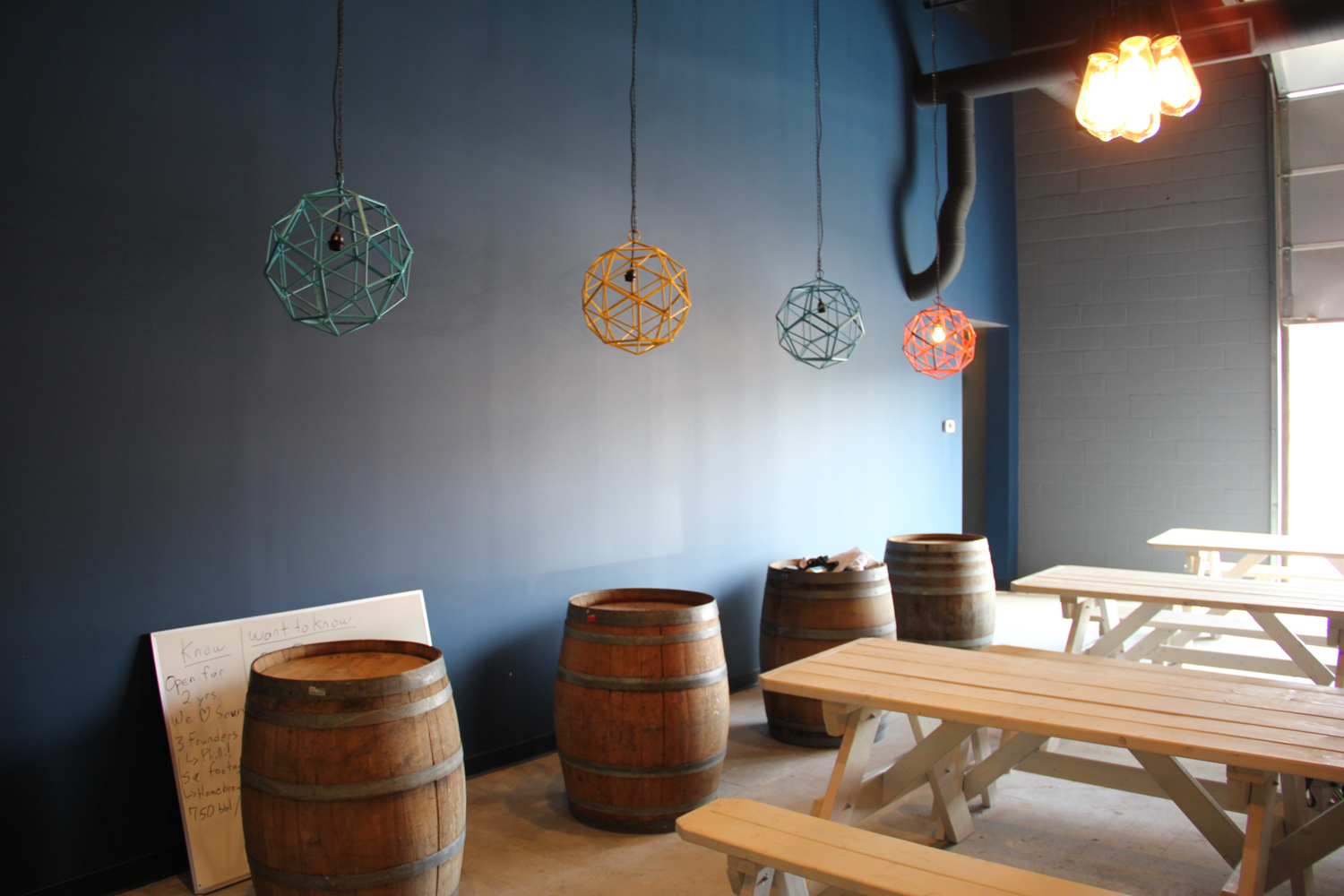 The new digs should provide plenty of room for Oxton, along with co-founders Mike O’Mara and Rob Burns, to brew somewhere between 1,500 to 2,000 barrels of beer to start, and up to 3,000 once things really get chugging. That’s about twice as much beer as the 750 barrels it produced each year in the Charlton space.

It’s a far cry from the first five-gallon homebrew fermenters the trio used during the brewery’s infancy, when they brewed – as the brewery’s name implies – late at night in a tiny kitchen outside Ball Square in Somerville.

The new taproom and brewery at 87 Santilli Highway in Everett, about a five-minute drive from their last spot, was already beginning to come together when we swung through. Designed by Jamaica Plain’s Helios Design Group, sparse clusters of light bulbs suspended from the ceiling illuminate large, communal picnic tables. At 2,500 square feet, the room, which will fit about 80 eager beer drinkers, is a major improvement over the brewery’s old taproom, which checked in at a scant 90 square feet. 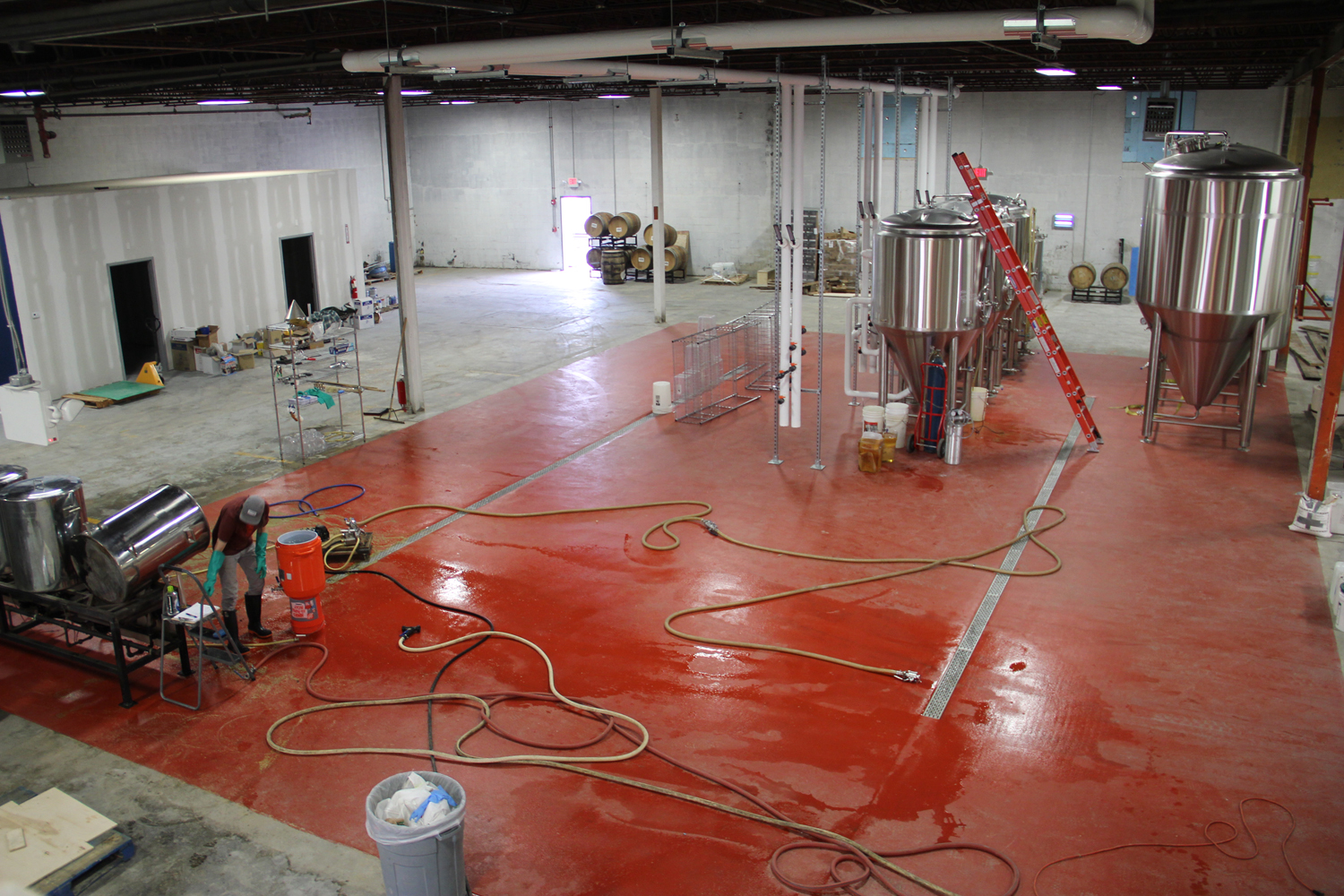 It wouldn’t have been out of the ordinary to find fans four or five deep on a Saturday, bumping elbows as they crowded the bar for a taste of Ever Weisse, the brewery’s refreshingly tart kiwi and strawberry fruited Berlinerweisse, or its El Lechador, a sweet milk stout made with poblano peppers, cinnamon, and nutmeg.

At the new taproom, a long, reclaimed wooden bar encircles a tap setup that will have the capacity for up to 24 different beers.

While fans shouldn’t expect 24 beers right off the bat, they can still expect a handful of new brews at the grand opening, including a small batch of Harborside, an oyster Gose made with bivalves from Wellfleet oysters. Oxton notes that the beer could get re-brewed later down the line with Island Creek oysters and surface at Row 34, the city’s latest new seafood/beer destination in Fort Point. 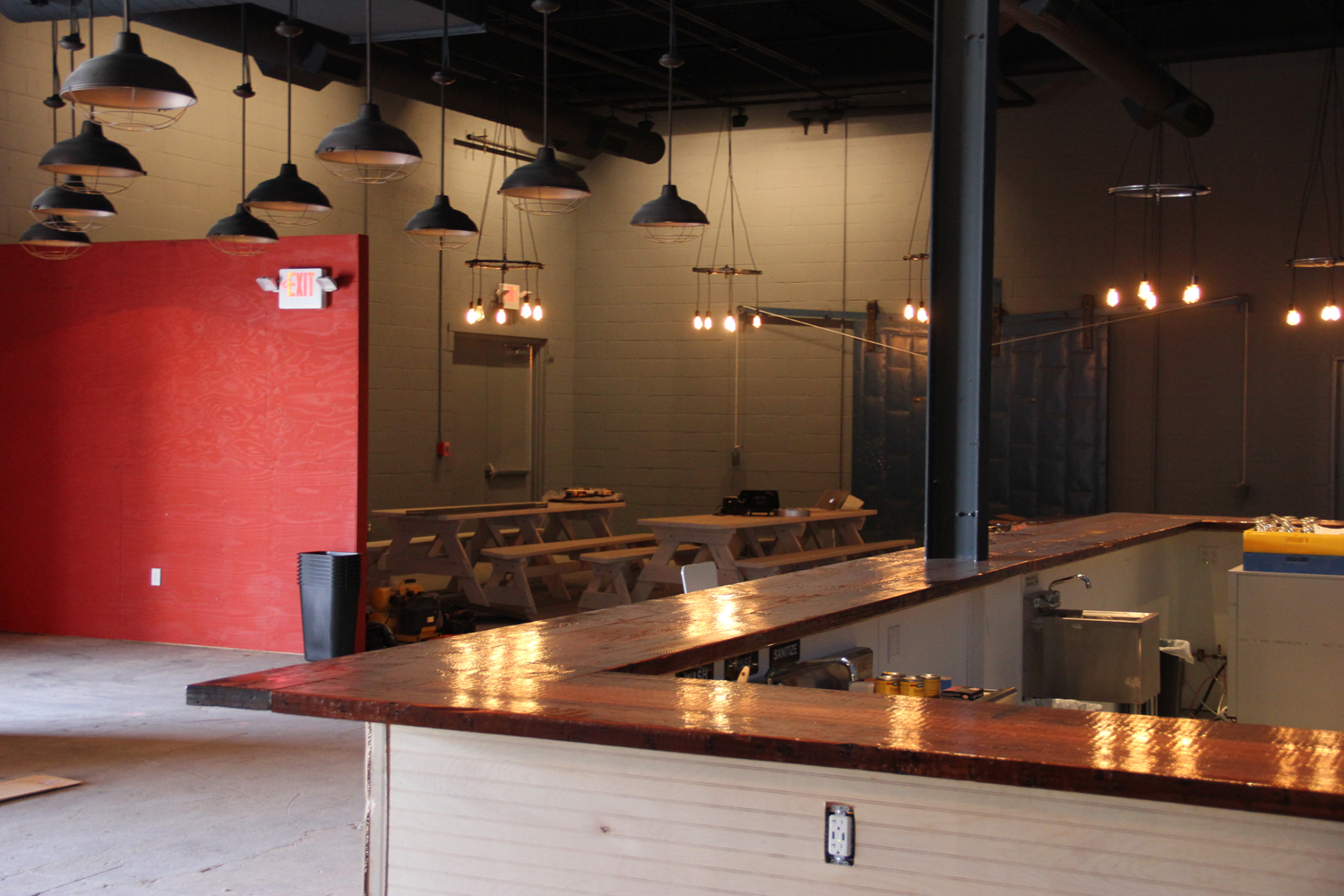 Fans going this weekend should also expect a new biere de garde, En Garde, along with some cellared treats from the past few years like a keg of Ever Weisse from 2012 and some of this past winter’s Bean Porter, a bourbon and rye whiskey barrel-fermented porter infused with vanilla and coffee.

Fans who can’t make it Thursday needn’t fret—a different “special” beer is also set to be tapped on Friday (Art #18) and Saturday (Cape Codder Weisse) and the brewery is set to have a few food trucks (Redbones, The Dining Car, The Bacon Truck) stationed outside all weekend as well.

Not much should change in the day-to-day operations of the taproom. The trio will continue to balance their love of experimenting with hops and sour, barrel-aged offerings. Adventurous cask offerings (Bee Tea conditioned on Yerba Mate tea and dry hopped with centennial hops, Rose aged on passion flowers and dried lemons, for example) will continue and so will its Art series, a collection of experimental, test-batch beers

“It’s a great way to experiment and not restrict ourselves,” Oxton said of the series, hinting that it has no end date in sight.

“Art #23: R Squared” the latest in the ongoing series, should see the taps on Thursday as well. The brewery will also have bottles of the beer, a Shiraz barrel-aged imperial stout, for $20 at 7 p.m.

The brewery’s enormously successful Barrel Society and Sour Futures programs will continue from the new space as well. Both programs, which incentivize fans to preorder beer they can pickup at the brewery later, have 600 subscribers each. 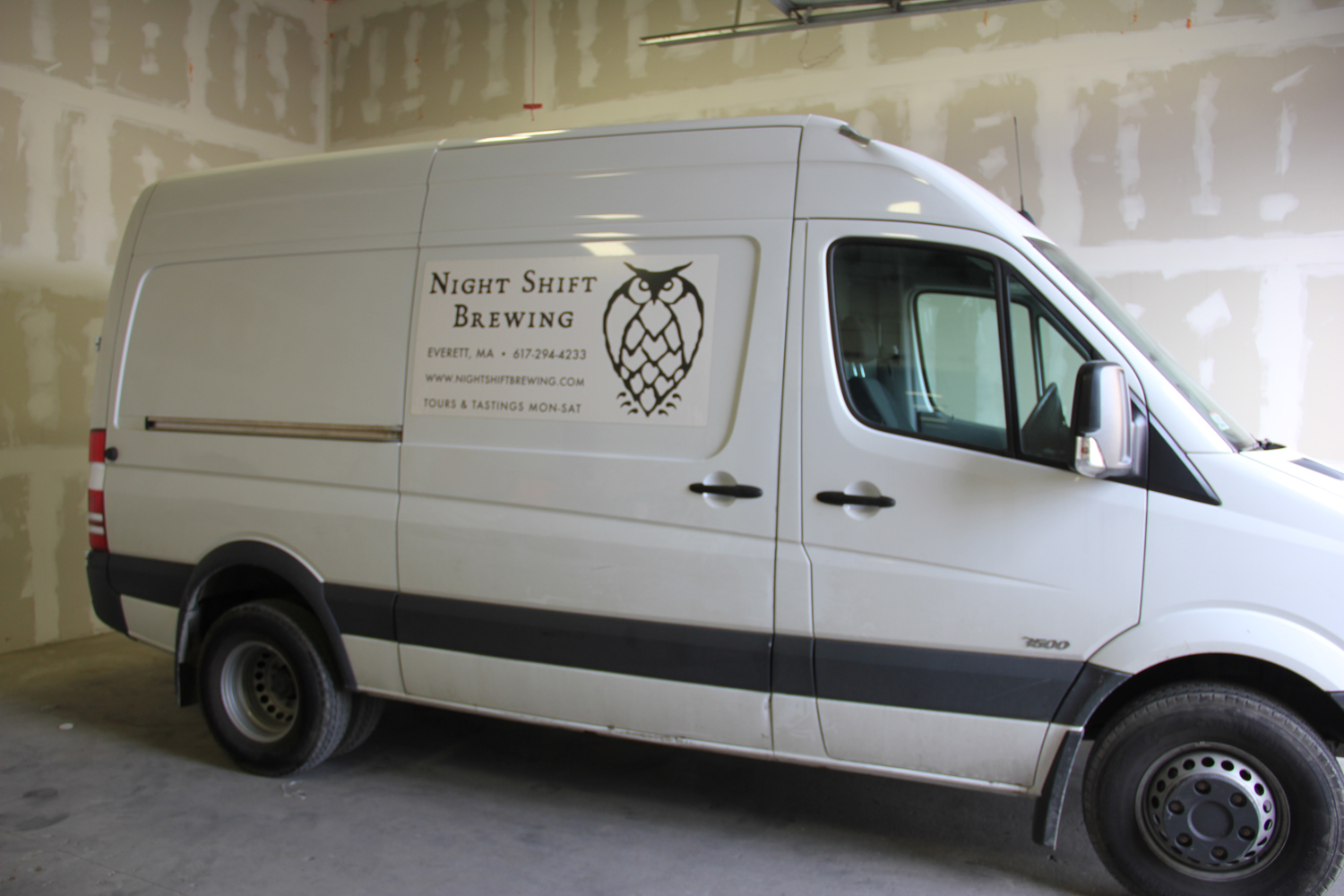 Tucked behind the Teddie Peanut Butter Factory, the building formerly housed the Seacrest Foods Company, an artisanal cheese distributor, before it relocated to Lynn.

The cement had long since been been poured on the day we visited and pallets of grain and empty growlers were already stacked against one wall. Against another, their collection of barrels – whiskey, wine, you name it – was slowly coming together. Eventually the brewers hope to accrue a massive amount of barrels, 400, up from the 100 or so they have now, with beer aging away inside of them. 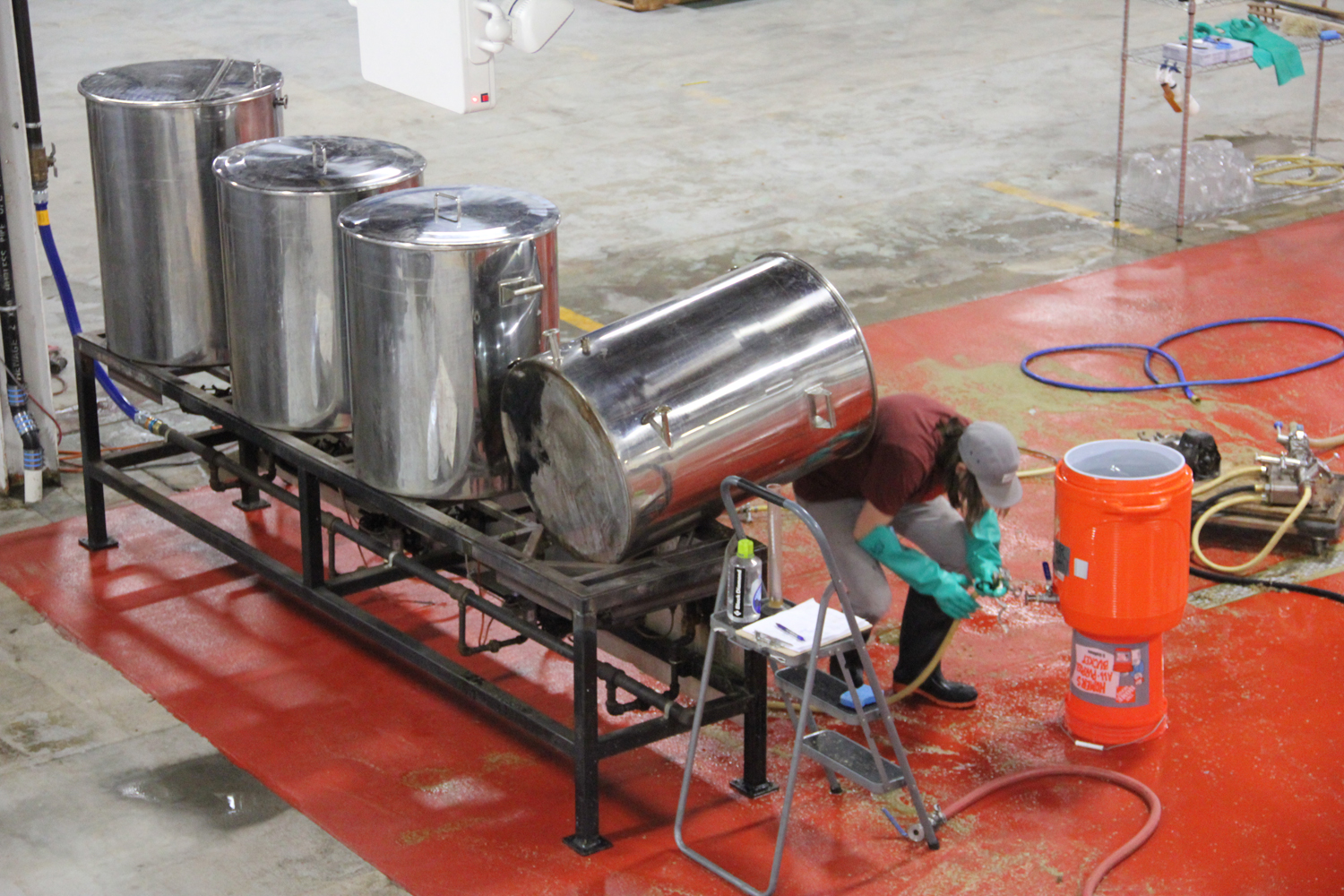 The boys hit the ground running in the new space as soon as they could. The first week of May they brewed the first beer they brewed in the old space, a 20-barrel batch of Trifecta, a Belgian pale ale with vanilla beans while last week brought a 20 barrel batch of Viva Habanera, the brewery’s spicy Agave and Habanero pepper-infused ale and 20 more barrels of Grove, the brewery’s latest foray into saisons, brewed with ruby red grapefruits and Meyer lemons.

Before the month closes out, Night Shift plans to showcase a beer at Beer Advocate’s upcoming American Craft Beer Fest they brewed last summer. A collaboration with North Carolina’s NoDa Brewing, the as-yet unnamed beer, an effervescent, high gravity sparkling sour ale, aged in Chardonnay barrels with Sauvignon Blanc grape must, should be ready in about two weeks.

The summer should also bring a healthy supply of Whirlpool, Night Shift’s juicy American Pale Ale. Brewed with Mosaic and a handful of other New Zealand hops, at least one batch of the beer is destined for cans, with help from Iron Heart’s mobile canning unit. The nomadic company helped the brewery can a small batch of Marble Head, a salty amber ale, in January. 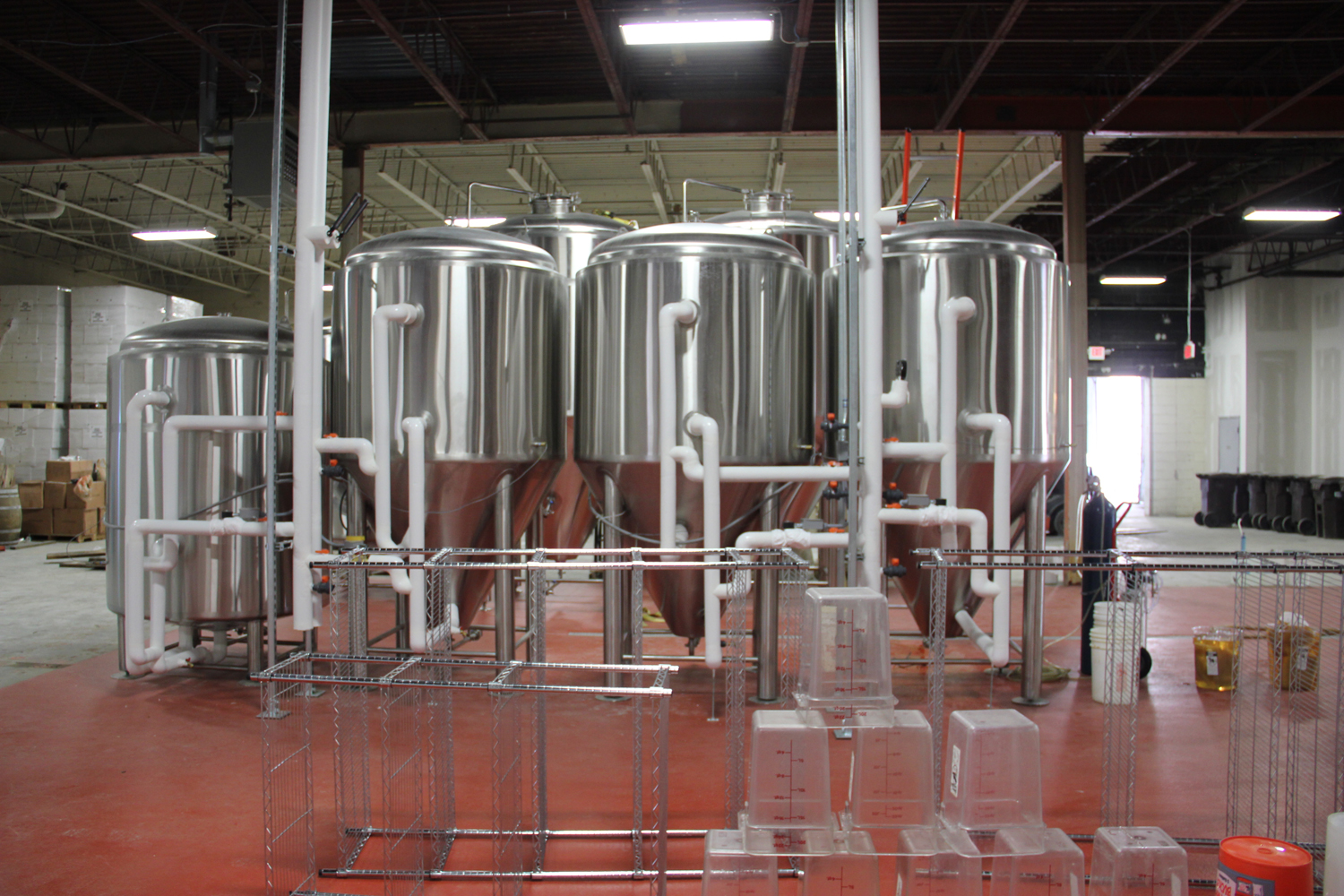 Also due in cans later this year is a collaboration with Portland, Maine’s Bissell Brothers Brewing. While details are still scarce, all the two breweries could divulge is that the beer would feature Brettanomyces and be canned in Maine. Bissell Brothers, just a hop, skip and a jump from Allagash Brewery, is another New England brewery – like Night Shift – with an equally eye-catching logo. The Bissells also happen to have a one-of-a-kind canning rig that’s been pumping out pallets of its flagship beer, The Substance, every two to three weeks since March. While Brett is widely regarded as a fickle beast to brew with, the two breweries hope to tame it and get it into cans for the thirsty public later this summer.

While entry to Night Shift’s new brewery on Thursday is $10 and good for a free 11-ounce pour, per usual, there is no charge for entry on Friday or Saturday or any other days it’s open next week.