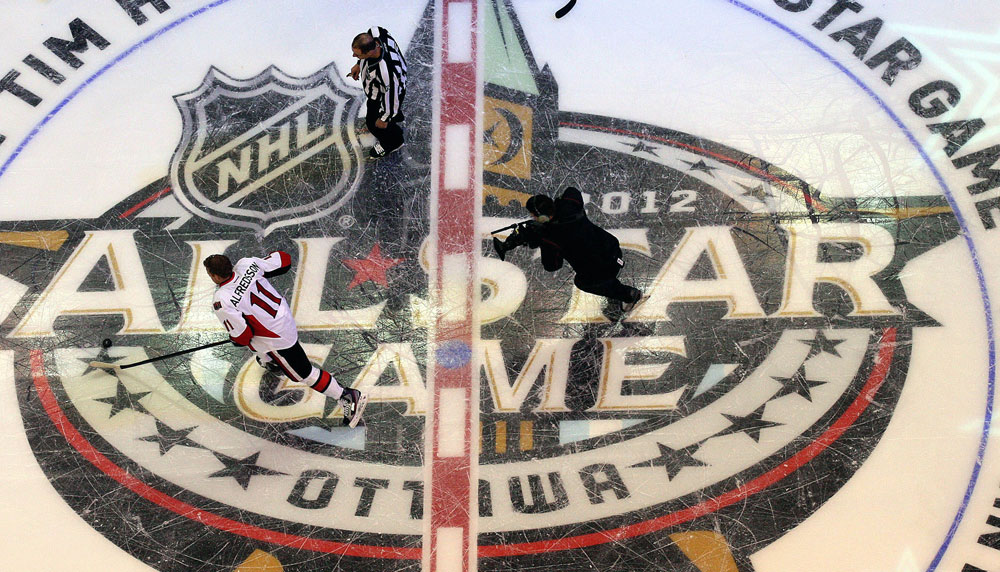 Olympic hockey is a rare and wonderful thing. For a scant two weeks every four years, we get to see the superstars of the sport compete without concerns of contracts, salaries, incentives, and endorsements and play for the honor of national pride.

Which is great, although a bit boring.

The biggest downside of the men’s ice hockey tournament at the 2014 Sochi Olympics (aside from Zdeno Chara’s bed) is that it robs us of the madcap circus of showmanship, bravado, and carefree competition that is the NHL All-Star Game. Especially considering that last year’s contest was canceled due to the lockout, the fans are overdue for some top-tier fanfare. Because we miss the spectacle of it all (and because sportswriters can be a bit obsessive), we decided to do the NHL a favor and nominate a list of Would-Be All-Stars for the 2013-2014 NHL season.

Now, picking an All-Star roster is a much simpler science than formulating a lineup for an Olympiad.

For one, whereas the braintrusts that assembled the teams facing off in Sochi tomorrow aimed for chemistry, balance, and leadership with their selections, All-Star rosters are only party to two masters – year-to-date performance and fan appeal. As such, getting named to an Olympic roster isn’t exactly as indicative of your skillset as making an All-Star team (we’re looking at you, Oskars Bartulis). Plus, we love measurables, and All-Star nods are certainly a consideration in determining any player’s legacy, so why not give the league’s best the distinction of that nomination?

For this hypothetical, we’ll be eschewing the recently adopted fantasy draft format and returning to the more traditional East versus West system. In the absence of fan voting, consider these rosters to be a bit more objective – focusing mostly on performance, but with a tinge of name recognition factored in and a slight Beantown bias.

With that, we give you our prospective picks for the 2013-2014 Would-Be NHL All-Star Game.

In net, the West is led by breakout Russian backstop Semyon Varlamov of the Colorado Avalanche. Varlamov is the most rounded keeper on the West’s squad, totaling in the top five in wins, saves, and save percentage. Antti Niemi’s West-leading 29 wins give him the No. 2 nod, and with a thin field to pick from (and considering Jonathan Quick’s poor play since returning from injury), the trio rounds out with Anaheim’s Jonas Hiller (25 wins, 4 SO).

Hometown bias aside, Tuukka Rask’s stellar play for the Bruins (2.11 GAA, .928 save percentage, 5 SO) makes him our pick to start in the crease for the East. Marc-Andre Fleury has rebounded in a big way in 2013-14 (earning 31 wins thus far), and the Flower’s gregarious, fan-friendly nature lock him in for the second spot. However, name recognition isn’t enough for Henrik Lundqvist, as he is upset by Tampa Bay’s young tender Ben Bishop, who more than deserves his first All-Star nod.

On the West’s blueline, we see old guard stalwarts and former Nashville pairing Shea Weber and Ryan Suter – the marquee d-men on their Canada and USA’s respective rosters – reunite in front of Varlamov. St. Louis youngster Alex Pietrangelo (6 G, 35 A) gets tabbed for his monster offensive year (as does natural forward Dustin Byfuglien [14 G, 29 A]), and Keith Yandle gets revenge on Cam Fowler by narrowly edging him for the sixth spot.

The starting pair of Zdeno Chara and Montreal’s P.K. Subban – both hated with much vitriol in each other’s home arena – make an interesting start for what is a decidedly weaker defensive corps for the East. Swedes Karlsson and Hedman (who was head-scratchingly left off the Tre Kronor’s squad for Sochi) fill in the middle, with American up-and-comer John Carlson getting his first ice as an All-Star alongside Philadelphia’s Mark Streit (8 G, 21 A).

Line chemistry is the theme of the Western forwards. Anaheim linemates Corey Perry and Ryan Getzlaf get the start ahead of Chicago duo Patrick Kane and Jonathan Toews. Dallas bosom buddies Tyler Seguin and Jamie Benn fill in Anze Kopitar’s wings, with Seguin taking an odd look at right. T.J. Oshie’s gritty style (46 P, +17, 30 PIM) pays off here as it did for his Olympic selection – he and teammate Alex Steen both take LW spots because of their meteoric rises this season. Perry captains under his hometown coach Bruce Boudreau.

The East touts loads of star power up front, with Alex Ovechkin (NHL-leading 41 G) and Sidney Crosby sharing the same the wings around Geno Malkin. Assuming injured Russian captain Pavel Datsyuk would have sat this one out, and with Tampa superstar Steven Stamkos also on the mend, Phil Kessel (31 G, 34 A) and John Tavares (24 G, 22 A) take on big roles on the East’s scoring front. No snubs here for Martin St. Louis and Claude Giruox, as both Canadians crack the starting 12 out of the gate. Soon-to-be-ex-Islander Thomas Vanek’s excitability factor nudges him ahead of teammate Kyle Okposo, who (along with fellow snakebitten American Bobby Ryan) gets left behind again. Dan Bylsma is the man behind the bench for this formidable offense, and Ovechkin gets the C.

With a just about two-thirds of the 2013-2014 NHL season in the books, these are the players who earned the title of All-Stars. Though many of these players will have the honor of donning their nation’s colors this winter, they deserve recognition for their in-league play this season.

Nothing quite compares to the entertainment experience of All-Star weekend. While we enjoy the sportsmanship and pageantry of the Olympics, we would’ve given it all up to see these two superstar rosters faceoff last weekend.

The Black and Gold continue their run tonight at TD Garden. END_OF_DOCUMENT_TOKEN_TO_BE_REPLACED

Who will make the Class of 2018? END_OF_DOCUMENT_TOKEN_TO_BE_REPLACED

It’s been awhile since we talked Black and Gold. END_OF_DOCUMENT_TOKEN_TO_BE_REPLACED

You’re going to wish you were in the Northern Alps. END_OF_DOCUMENT_TOKEN_TO_BE_REPLACED

END_OF_DOCUMENT_TOKEN_TO_BE_REPLACED

Bill might be “on to Tennessee,” but we’re not. END_OF_DOCUMENT_TOKEN_TO_BE_REPLACED