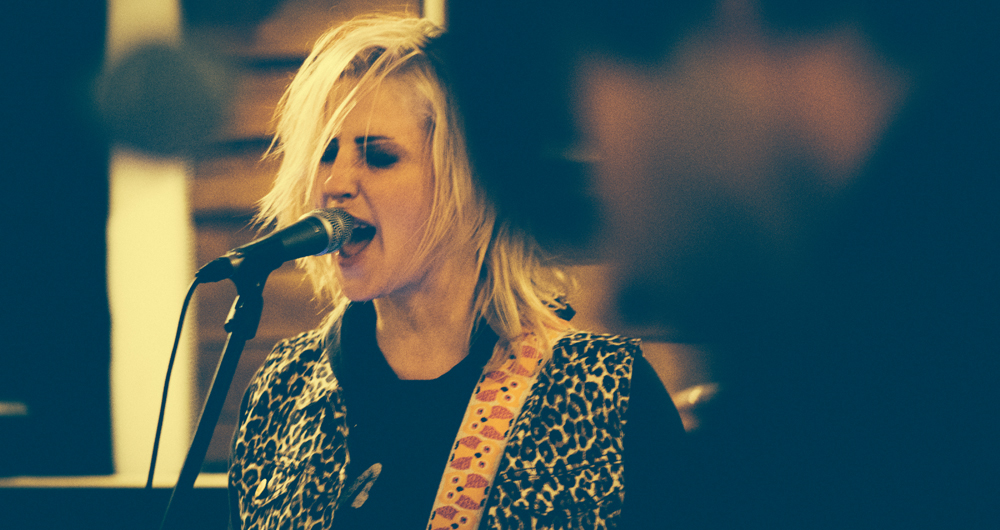 While plenty of her contemporaries amongst late ‘90s/early ‘00s punk exemplars have retrogressed into legacy acts (coughrrRancidcough), Brody Dalle has done quite a bit of evolving.  Since the 2006 dispersal of the Distillers, 35-year-old Dalle has had a couple of kids and, nowadays, does a lot of jogging instead of drugs. And on her her first full-blown solo product, “Diploid Love,” she refines the pop and electronic components that started seeping in during her over-too-soon stint at the helm of Spinnerette. “Rat Race” and “Don’t Mess With Me” deploy enough crunch to keep OG fans feelin’ skippy. Then there’s “Meet the Foetus/Oh The Joy,” a dreamy alt-rock excursion in which Shirley Manson stops by to say, “Hey! ‘Ey ‘Ey ‘Ey! Whoa Oooooh! Oh!” Meanwhile, “Parties For Prostitutes” sounds like frickin’ Portishead. ‘Tis a lovely selection for anyone hoping to enjoy a rock ‘n roll album.

Dalle, who swoops into the Sinclair to kick some ass on Monday, called us up from her tour bus to graciously answer some stupid fanboy questions.

You were obviously the most recognizable member of the Distillers, so if you wanted to, you could probably just call yourself “The Distillers” and hire whoever you wanted to play the rest of the instruments. Why do a solo thing, when you could hang on to the name brand recognition?

I know. It’s stupid, right? I could probably make a lot of money doing that. I tried to get the Distillers back together, and it didn’t feel right. I went into the studio with Greg Ginn and Andy [Granelli] and Tony [Bevilacqua], and at the time, I wasn’t talking to Ryan [Sinn], and we tried to write a record. It felt like…It felt like a used condom. It just didn’t fit anymore. It’s a “been there, done that,” kind of thing. It was kind of a sad moment. But it’s really fun to play those [old] songs.

Whoa. When did all this happen?

Um…It was after the Spinnerette record, and then there was two years, and then I made this record. What would that be? 2010?

By the same token, I feel like a lot of bands from the Distillers’ era are basically nostalgia acts now, but you’ve been doing different stuff. Does it bum you out when people come to shows and go “Aw, man, I hope she does a ton of songs from ‘Sing Sing Death House!’”?

I mean, y’know, I do play those songs. I wrote ‘em, so I figure if I’m under my own moniker, my own name, I can do pretty much whatever I want, including play all those old songs.

Sweet. How do you pick people to collaborate with? I figure everyone you know is probably a musician, so there’s got to be more criteria than that….

Well, for “Meet the Foetus,” I needed a girl gang. I kind of wanted it sound like that ethereal….Think of Kim and Francis in the Pixies, singing “Where is my Mind?”. Y’know, that really high, falsettoy kind of…

Yeah, I kind of wanted something like that. I was thinking of the Hungarian Women’s Choir. So I was like, “Who can I get? Who do I know?” I called Shirley [Manson], and I called Emily [Kokal] from Warpaint, ‘cause I wanted to work with her for ages, and the three of us did it. It kind of gave me the goose bumps. It was awesome. And then Nick [Valensi], he’s totally underrated and overlooked, and my best friend is married to him. I was like, “Do you want to play on my record?” He said “Yes.” I just put the feelers out there to see who wanted to do it.

You sang on the “Rock the 40 Oz.” EP way back when. Is it within your power to get Stza Crack, yourself, and Shirley Manson to all sing on the same track?

I mean, I could try. I don’t know how I’d get a hold of [the Leftover Crack] guys. I haven’t seen them since I sang on that song. It’s been probably 17 years since I saw those guys. Maybe not 17. Let’s say 15. So I don’t know if that’s gonna happen my friend. Sorry.

(Sighs) That’s okay. You recorded a bunch of “Diploid Love” at your home studio, the Pink Duck. How did the Pink Duck get its name? That’s a crazy name for a thing.

Well, “Pink Duck” is my daughter’s name. My husband’s [The dude from Queens of the Stone Age] name is Baby Duck, and when she was born, she was really pink. So we called her “Pink Duck,” and we call our studio Pink Duck after her. In the beginning of the video for “Meet the Foetus,” I put a little baby duck on the pillow, and that’s my husband. And at the end of the video when I wake up, he’s laying next to me.  And there’s a squid. “Squid” is also my daughter’s nickname, like her punk rock name. My son is called “Little Wing,” and he’s the eagle in the video. There’s a lot of cool symbolism in there.

That video is a little more ambitious than what I remember of Distillers videos, to say the least.

I know you quit a lot of stuff when you got pregnant, but I read you also quit coffee. Why quit coffee?

Really? I didn’t know that.

You’ve not heard that before? Maybe you haven’t been around many pregnant women.

You’re not supposed to drink a lot of caffeine. Obviously alcohol, cigarettes, drugs, those are all no nos. Even sushi, raw fish, and certain types of cheese, you’re not supposed to eat that shit either. But y’know, it’s different in different countries. The French, they’ll probably drink a little bit of coffee. Same with the Italians. They have their occasional glass of red wine and seem to be doing okay. But the general rule is what I said, y’know?

Enter to win tickets to see Trio Da Kali at The Villa Victoria Center of the Arts (Newton, MA) on April 10th. END_OF_DOCUMENT_TOKEN_TO_BE_REPLACED

END_OF_DOCUMENT_TOKEN_TO_BE_REPLACED

Enter to win tickets to Rhye at The Paradise on February 28th. END_OF_DOCUMENT_TOKEN_TO_BE_REPLACED

Her new album has been pushed back, but we have Kimbra’s new single for you. END_OF_DOCUMENT_TOKEN_TO_BE_REPLACED

The folk duo returns with a new record this week. END_OF_DOCUMENT_TOKEN_TO_BE_REPLACED

Now that we’re done looking back at 2017, let’s look ahead at 2018. END_OF_DOCUMENT_TOKEN_TO_BE_REPLACED

Our first Song of the Week for 2018. END_OF_DOCUMENT_TOKEN_TO_BE_REPLACED

In a year when so many things were off, the music was right on. END_OF_DOCUMENT_TOKEN_TO_BE_REPLACED