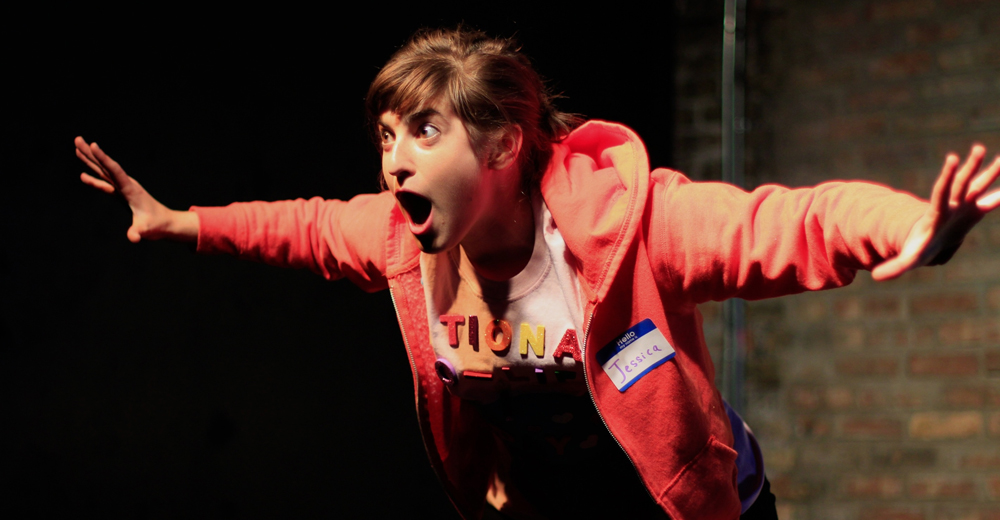 Madeline Burrows is the strong force at the front of Boston’s punk outfit Tomboy, and she is taking her first step into full-length solo theater with “MOM BABY GOD,” a play based on undercover research on the youth anti-choice and abstinence-only movements. “MOM BABY GOD” is coming to Davis Square Theatre (not to be confused with the Somerville Theatre down the street) this weekend with performances April 5-7. The three nights are co-presented by Boston Doula Project, Brandeis Women’s and Gender Studies Department, and Boston Hassle. We spoke with Madeline about the show, where her inspiration came from, and how the world at large has reacted to it.

Q: Is “MOM BABY GOD” your first foray into a one-woman show or have you been experimenting with this theatrical format for a while?

A: This is my first full-length solo show, but I had been experimenting with solo performance in shorter formats before committing to doing a full show. I had done a few shorter interactive performances as Lila Rose, who is this real-life right-wing media darling of the anti-choice movement and is also a character in “MOM BABY GOD.” She became almost like a right-wing drag persona for me, and those mini-performances, where Lila would invite an audience on a tour through an imaginary crisis pregnancy center or lead an after-school abstinence-only workshop, formed the foundation for “MOM BABY GOD.” Since then I’ve totally fallen in love with solo performance.

Q: For “MOM BABY GOD,” you joined one of these right-wing pro-life organizations for two years. How did you keep your cool within the group? I can imagine that being a very anxiety-inducing environment. Did you ever feel yourself second-guessing your own thoughts about abortion?

A: Oh my gosh, if I had been a member of Students for Life for 2 years I would have gone crazy. I tried to attend a whole range of stuff — youth conferences, rallies, a crisis pregnancy center fundraiser, and lots of one-on-one interviews in between — so I never spent too much time in one organization. Initially I had wanted to go in with a fake pro-life persona and pretend to be one of the group. But in the end I decided to go in as a researcher, so everyone I spoke with knew that I was conducting research for a play, though I obviously didn’t wear my politics on my sleeve. It was definitely anxiety-inducing at times! It never made me question my own politics, but it impacted me in other ways. It was really fascinating to see the youth culture at these right-wing youth events. At the Students for Life Conference I was surrounded by mostly high school and college students, and just by being in that environment I found myself reverting to these feelings I had in middle school of wanting to be one of the cool kids. Except there, the way to be a cool kid was to prove yourself to be the most committed to abstinence and closing down abortion clinics. Totally eerie. At the end of the conference, there was a Christian rock concert with an all-female band. I approached the women in the band after their set and asked them if they ever experienced sexism in the Christian rock scene. They were like, “totally!” We ended up having this bizarre bonding moment telling each other horror stories of sexist stuff guys have said to us at shows. I think the hardest part for me was resisting the urge to try and argue with some of the self-proclaimed pro-life feminists to join the other side.

Q: I know that as a female musician, you definitely have to put up with sexist bullshit from dudes at shows. Do you kind of get this reaction with your play as well or has it overall been a more welcoming environment?

A: I haven’t had any problems with audience members, but we have definitely experienced sexism on the tech end of things. My production manager Allison is a total beast and a professional sound engineer, but she’s had to deal with lots of disrespect and mansplaining, even coming from guys who are younger and less qualified than her. Like, assuming she doesn’t know what an a-frame ladder is. I’m like, dude, really?

Q: I had to Google a-frame ladder, but I also avoid ladders like the plague haha. When I’ve seen you perform with Tomboy, you have this way of commanding the audience with your presence, making everyone not only listen to you and the band but deeply absorb its message. I can see that translating well to your performance in a play format, but would you consider “MOM BABY GOD” more of a performance art piece? Or do you think there’s not really a line between performance art and theater?

A: Thank you. I would definitely describe it as theater, not performance art. It’s a solo show and it’s political and has an immersive aspect to it, which might fall under someone’s definition of performance art. But I think of performance art as being a little bit less narrative, less character based. “MOM BABY GOD” is really about the people within this right-wing movement, how they think and feel, what motivates them, how they are constructing something so big and so damaging. It’s very much a play about people. I understand why people are drawn to the term performance art. It implies something that isn’t stale, that’s bold and innovative. But I think those are qualities theater should have.

Q: I see where you’re coming from with that. I always find with some theater pieces it feels like performance art in a bit, but I don’t have too much experience with either of those myself!

A: Totally! I think you’re right about that. The definition itself doesn’t really matter to me. Sometimes we get so caught up trying to categorize art that we lose the vocabulary to just talk about it on its own terms.

Q: You got to perform “MOM BABY GOD” with JD Samson’s MEN at Flywheel in Western MA. How did that come together? Did she reach out to you?

A: It actually started as a coincidence — MEN was looking for a Western Mass show to fill a night-off they had on tour, and we had already booked Flywheel for “MOM BABY GOD” on the same night. Michael from MEN is also a Hampshire grad and a mutual friend reached out to me about doing a double bill. I was like, are you kidding? Duh! It was a huge honor to share the stage with people who I have so much respect for and who have inspired me so much. The atmosphere was so electrifying. It was standing room only, and really cool to combine different kinds of performance in the same night. I’d love to do more of that. I wish we could end every show with a dance party.

Q: That’s amazing! I also admire JD for everything she’s done. She’s a talented musician and producer, but her performances are always very theatrical whether it was with Le Tigre or MEN: even down to their outfits haha. I could see that vibe working really well mixed with a “MOM BABY GOD” performance.

A: Definitely. The way she blends different mediums of art and performance and politics really inspires me as an artist. I feel like with some genres of music people don’t put a lot of emphasis on crafting a live performance, so I always appreciate it when that’s central to a band and becomes another aspect of their art.

Q: At the Tomboy show last weekend you mentioned some story about Fred Phelps (rest in shit). From where I was in the crowd, I couldn’t quite follow it. What was the story behind that?

A: Oops, yep. I made a joke about Fred Phelps protesting a Tomboy show but we started playing the song before I could give a joke disclaimer. I did have one near encounter with Fred Phelps, though. When I was 14 the Westboro Baptist Church threatened to fly across the country and picket my high school’s (Newton South High School) production of the Laramie Project. They never showed up, but that really stuck with me for years, that a theater production could create that kind of political culture around it. I’ve always thought that was amazing.

Q: I think WBC was supposed to protest a production of the Laramie Project at Emerson a little while back as well and didn’t show up.

A: They also protested a One Direction concert recently. Endlessly fascinating to me.

Q: One last question: what’s the biggest takeaway you want attendees to get from “MOM BABY GOD”?

A: That this is real life happening right now. The content you see in the show–the rhetoric and tactics of the anti-abortion movement–this is all real and they are actively stripping away women’s reproductive rights and will continue to do so unless we organize against them. What are we going to do to stop them?

END_OF_DOCUMENT_TOKEN_TO_BE_REPLACED

Enter to win a pair of tickets to attend The Hess Collection Seminar and Dinner as part of Boston Wine Festival 2018 at the Boston Harbor Hotel on Wednesday, March 14th. END_OF_DOCUMENT_TOKEN_TO_BE_REPLACED

I referred to it as the “best kept secret” in Boston arts for the holidays. END_OF_DOCUMENT_TOKEN_TO_BE_REPLACED

Boston’s arts scene shines at this time of year. END_OF_DOCUMENT_TOKEN_TO_BE_REPLACED

It’s so much more than a holiday show. END_OF_DOCUMENT_TOKEN_TO_BE_REPLACED

Rock for a cause this holiday season. END_OF_DOCUMENT_TOKEN_TO_BE_REPLACED

Get out and see a show this holiday season, and save some money when you do. END_OF_DOCUMENT_TOKEN_TO_BE_REPLACED

You can help give the gift of music to kids in need this holiday season. END_OF_DOCUMENT_TOKEN_TO_BE_REPLACED

Be honest: when’s the last time you attended a Gala? END_OF_DOCUMENT_TOKEN_TO_BE_REPLACED