Never Forget: The ’94 US World Cup Jerseys Were the Greatest Ever 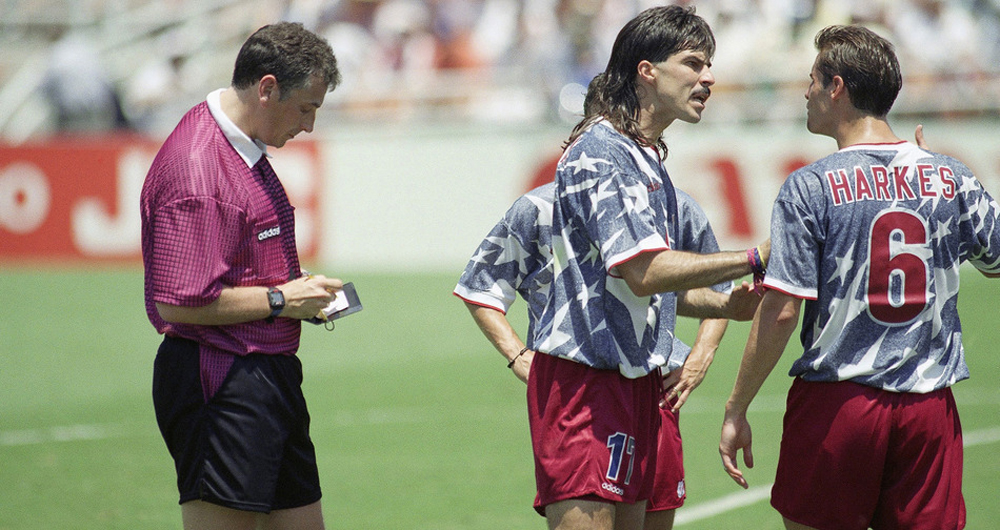 Jerseys today are too safe, too quiet, they don’t take any chances. There was a time long ago called the ’90s when symmetry didn’t matter. There were no Cristiano Ronaldos or David Beckhams to make soccer a fashion statement. It was competition first, strategic flopping second, and looking good was tertiary.

Amidst this wondrous decade was a sports fashion blunder so epic that it put Zubaz pants to shame, and ultimately, was so bad that it was great. I’m speaking, of course, of the 1994 Team USA World Cup Jerseys. These things were hideous, combining faux acid-washed denim with slanted white stars of various sizes. In most cases, such as that of Revs great, and legendary soccer hippie Alexi Lalas, these unis were paired with some wicked hair/facial hair combos too.

Looking like something straight out of a Faith No More music video, the ’94 uniforms were designed by Adidas, who also designed the jerseys for several other countries in the Cup that year, but none louder than the Americans’ getup. Even this super ’90s Pert Plus commercial featuring midfielder Paul Caligiuri and his shine and bounce-filled head of hair couldn’t make these babies look attractive.

It didn’t matter though. Not only did the ’94 US team make it to the round of 16, but their jerseys were the boldest in an era of bold jersey choices. Even awful selections like the MLB’s “jerseys of the future” promo uniforms in 1998, the Atlanta Hawks red-to-black fade, or the Phoenix Coyotes alternates of the late ’90s don’t stack up with these beauties, and we doubt anything ever will. They just don’t make ’em like they used to, and Jurgen Klinsmann knows it. Clearly, he realizes that Team USA’s current jerseys aren’t attractive enough to power his team to the finals.

Pour some out for ’94, the greatest sports fashion decision ever to be made.