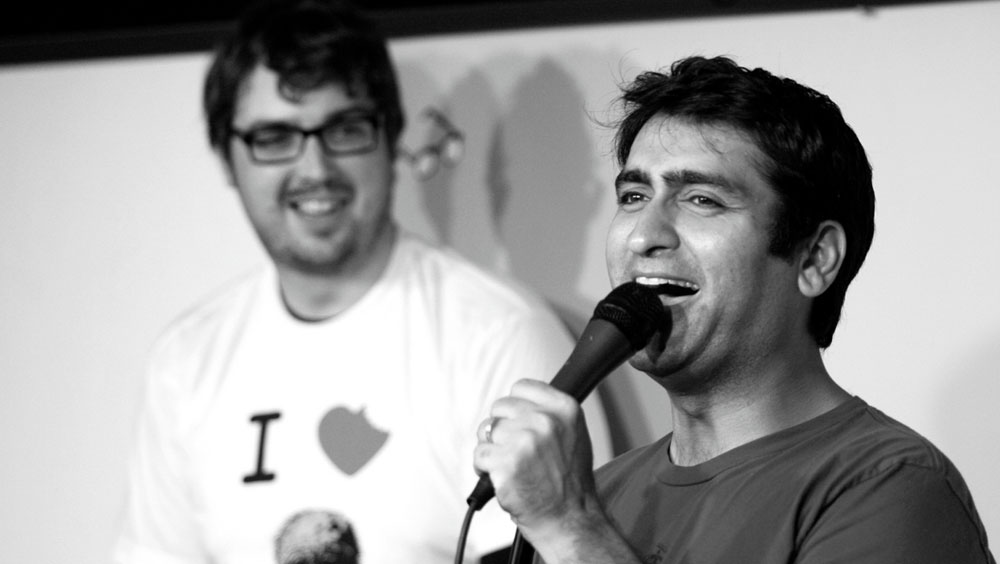 Podcasts are like opinions — everyone has one. There’s a podcast for every topic these days: comedy, bad movies, comic books, tech, science, sports, and so on. With such a wide range of choice, it’s easy to get lost in the shuffle. Jonah Ray and Kumail Nanjiani have carved out a niche as the hosts of hugely popular podcasts on the well-known Nerdist network. Ray can be found chatting about music with bands like Upset, Motion City Soundtrack, Islands, and Man Man on his show “Jonah Raydio,” along with being a co-host of the “Nerdist” podcast. Nanjiani discusses all things video games on “The Indoor Kids,” which he co-hosts with his wife Emily. We caught up with the two comedians ahead of their sold-out show on Sunday at Great Scott to talk love of zombies, podcast highlights, and upcoming plans for the new year.

Q. Jonah, this is odd to admit but I actually got to be made up as a zombie for an obstacle course by “The Walking Dead” makeup crew at San Diego Comic-Con in 2012. I remember you running for your life trying not to get “infected” by us walkers. I’m a huge fan of scary movies and zombie. What are your favorite horror films? Would you rather be a survivor of the zombpocalypse or just give in and become one yourself?

Ray: That thing kicked my ass. I was drenched in sweat by the end of it and out of breath, but it was worth it because it proved a point I had been making since I was a kid … that I wouldn’t get infected and I’d be able to survive.

My favorite horror movies are the original “Dawn of the Dead,” “Suspiria,” “Phantasm,” and “Creepshow 2” — if only for “The Raft” segment. As far as surviving or becoming a zombie? Neither, I’d kill myself and make sure I didn’t come back.

Q. Kumail, you host a video games podcast with your wife. What was your first video game system? Which platforms and games are you two currently playing or looking forward to?

Nanjiani: The first machine I ever played video games on was a Commodore 64. I loved “Paperboy,” “Barbariam,” “Yie Ar Kung Fu,” and “Ghost & Goblins.” But the moment I got a [Sega] Genesis and played “Golden Axe” is when I knew I was going to be a gamer for life. I could save kingdoms and ride dragons!

Q. Both of you have your own podcasts, do stand-up on the road, maintain your own weekly comedy night in Los Angeles (“The Meltdown Show”), and act in commercials/TV shows/movies. How do you guys keep up with such a busy schedule? What do you like to do to relax and wind down from work?

Nanjiani: The stuff I like to relax with usually feeds back into my work. I watch movies and play video games and a lot of that ends up getting talked about in my stand-up or the podcast. Emily and I like to travel and take vacations, too. I’m hankering for one right now. I love to work and stay busy though. Being able to do a bunch of different things is very exciting to me.

Q. “The Indoors Kids” and “Jonah Raydio” definitely had a great year in terms of not only how much they’ve grown but also the awesome guests you’ve had on. What are some particular podcast highlights that stand out from the past year for the two of you?

Ray: Having Kim Shattuck from The Muffs on shortly after her firing from The Pixies was probably a highlight for me. Also, a friend’s band we play often on the show, The Manx, went on a tour and said they had a ton of people showing up because they heard them on the show. That was rad.

Nanjiani: We just happened to be in Portland the week that an incredibly successful indie game, “Gone Home,” had just come out. These four programmers left their jobs at a large company to move into a house together and create this really beautiful, haunting, and unique game, and we were lucky enough to interview them when they were just starting to get the sense that the game was going to change their lives. It was great. Plus they made us cookies.

Q. Comedy Central picked up “The Meltdown Show” to air as a series this year. Did Comedy Central approach you about filming the show or was it pitched? What’s the experience of prepping your own TV show been like?

Nanjiani: We pitched the show to a handful of channels that we thought would be a good fit and Comedy Central decided they wanted to buy it. Prepping the show has been exciting and terrifying. We’ve been doing the show every week for three years. The challenge has been to try and capture the feel and soul of it in a 23-minute TV show.

Q. Any additional projects coming up for either of you that we should keep an eye on?

Ray: I’ll be working on a new album that should be out towards the end of the year. It’s called “BREECH HULL ALL DIE.”

Nanjiani: I’ll be in “Hot Tub Time Machine 2” and in “Silicon Valley” on HBO on April 6, a new comedy series created by Mike Judge.

Q. Lastly, the two of you will be performing stand up at Great Scott, which is one of my favorite music venues in the city. Do you prefer rock clubs to comedy clubs? The atmosphere and crowds seem much more laid back and receptive, or are there advantages to playing both?

Ray: I always prefer rock clubs as the people that go are there for the specific reason of seeing whoever is performing. At comedy clubs you get people who are just going to see comedy in general, so therefore it might not be the type of comedy they are looking for. Music doesn’t work like that, you don’t just go to a music venue blindly to see if they’ll be playing the specific type of music you tend to like. Also, Kumail usually likes to stage dive after his set.

Nanjiani: I prefer rock venues and theater mostly because you can control the audience. At comedy clubs, a lot of people just come to watch whoever’s performing. But if you’re playing non-traditional venues, they are there to see you. I also like that we can keep the ticket prices lower and not force people to buy drinks or food that they don’t want to. Food and comedy never works anyway.

Enter to win tickets to see Trio Da Kali at The Villa Victoria Center of the Arts (Newton, MA) on April 10th. END_OF_DOCUMENT_TOKEN_TO_BE_REPLACED

END_OF_DOCUMENT_TOKEN_TO_BE_REPLACED

Enter to win tickets to Rhye at The Paradise on February 28th. END_OF_DOCUMENT_TOKEN_TO_BE_REPLACED

END_OF_DOCUMENT_TOKEN_TO_BE_REPLACED

Enter to win a pair of tickets to attend The Hess Collection Seminar and Dinner as part of Boston Wine Festival 2018 at the Boston Harbor Hotel on Wednesday, March 14th. END_OF_DOCUMENT_TOKEN_TO_BE_REPLACED

Her new album has been pushed back, but we have Kimbra’s new single for you. END_OF_DOCUMENT_TOKEN_TO_BE_REPLACED

The folk duo returns with a new record this week. END_OF_DOCUMENT_TOKEN_TO_BE_REPLACED

Now that we’re done looking back at 2017, let’s look ahead at 2018. END_OF_DOCUMENT_TOKEN_TO_BE_REPLACED