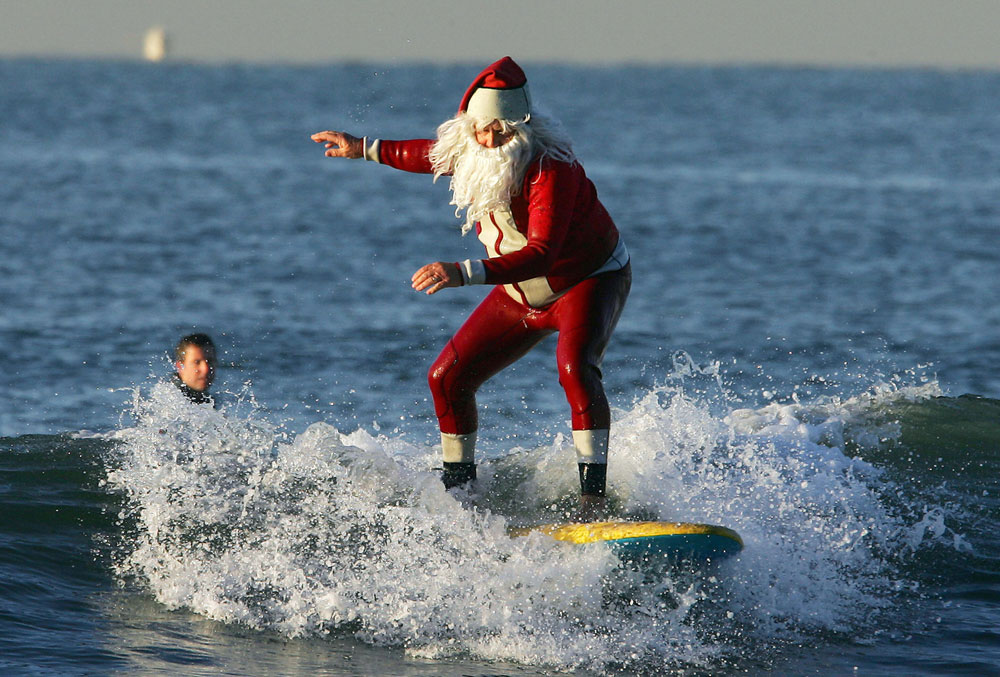 You’ve gorged yourself on Christmas cookies and eaten so much ham that now you’re shaped like one. But rally! You must plow on, for next week is New Year’s Eve and it’s vital you have a fresh start to 2014 by making questionable decisions and waking up covered in glitter and tinsel. We’ll do what we can to help you get through this weekend and that other weekend that will occur in the middle of next week. You’ll be fully equipped for barroom chatter, with tales of missing packages, surfing Santas, and the Grinch who stole Christmas on Cape Cod. Stay safe and we’ll see you next year, suckers!

You have icicles growing out of your nostrils, and yet there are still ticks infecting Cape Cod residents with rare and terrible diseases, like Babesiosis and Anaplasmosis. So if some Pollyanna tries to make you feel better with an “at least” sentence about the cold, babble incoherently about parasites and then go back to sulking into your whiskey.

Here’s a real-life Grinch tale to recite for your friends:

A Barnstable woman gave low-income neighbors a ride
To pick up their toys from the Toys For Tots Drive!
The $500 worth of merch she did grab
And left her poor neighbors to call for a cab
But they had themselves a much better notion
They told the cops all about the commotion
And when they caught the Grinch, she wouldn’t tell ’em
Where the missing gifts were, so they made her a felon.

Merry Christmas, Iraq! The US is sending you missiles and surveillance drones because you’ve been sooooo good this year (and also because Al Qaeda-supported insurgents are gaining ground).

European researchers say that hunger has decreased over the past 40 years. In 1965, only 30 percent of the world’s population was getting a sufficient diet. Now that number has fallen to 60 percent. Previously hungry nations aren’t growing their own food, instead they’re importing it from abroad. So the next time your mother says, “There are starving people in China!” you tell her that actually, China is a major food importer and that obesity there is on the rise. Then go back to making your elaborate mashed potato structure.

Countless packages arrived late, as UPS and FedEx were swamped with orders just before Christmas. This led to a lot of Tweet-cussing but make no mistake, last-minute shoppers: You broke the mail. Your weekly topical pick-up line is obvious: “Packages,” “right on time,” etc.

Massachusetts uses CGI Group, the same website contractor hired by the federal government, to manage its health care connector website. But the state has stopped paying the company, because … well, it sucks. The state has determined that its old software and even paper (paper!) to notify residents of changes to their insurance. Paper!

Another day, another holiday: In case you forgot, Thursday was Chairman Mao’s 120th birthday, so better run out and get your friends a Mao snow globe or his face on salt and pepper shakers. You can blame the lateness on UPS. They won’t mind, they’re used to it.

Enter to win a pair of tickets to attend The Hess Collection Seminar and Dinner as part of Boston Wine Festival 2018 at the Boston Harbor Hotel on Wednesday, March 14th. END_OF_DOCUMENT_TOKEN_TO_BE_REPLACED

This year, the festival is welcoming more female wine producers than ever before, making up 20% of all winemakers that will be at the festival. END_OF_DOCUMENT_TOKEN_TO_BE_REPLACED

The holidays are here, so raise a glass. END_OF_DOCUMENT_TOKEN_TO_BE_REPLACED

‘Tis the season to mix a nice, stiff drink. END_OF_DOCUMENT_TOKEN_TO_BE_REPLACED

Warm up with Tito’s on your sweater and Tito’s in your glass. END_OF_DOCUMENT_TOKEN_TO_BE_REPLACED

There’s a ton going on at Idle Hands in Malden this spring. Dan McDonnell and Josh Deering joined me in studio to talk about Maifest, what’s new in the Taproom, and their collaboration with The Black Ale Project. Oh, and don’t miss Idle Hands at BeerAdvocate’s Microbrew Invitational next month! END_OF_DOCUMENT_TOKEN_TO_BE_REPLACED

Giovanna Guzman is the marketing coordinator at Kings Bowl, who you can visit in the Back Bay, Burlington, Lynnfield, Dedham, and soon in the Seaport. We talked beverages, naturally, seeing as it’s Thirsty Thursday. And we sampled sangria. And it was soooo good. END_OF_DOCUMENT_TOKEN_TO_BE_REPLACED

These five words might change your life: Farmer Willie’s Alcoholic Ginger Beer. Co-founders Nico Enriquez and Max Easton were in studio with me this morning. Nine-packs and kegs of Ginger Session coming next week! END_OF_DOCUMENT_TOKEN_TO_BE_REPLACED