NBA vs. NHL Playoffs: How Do You Choose? 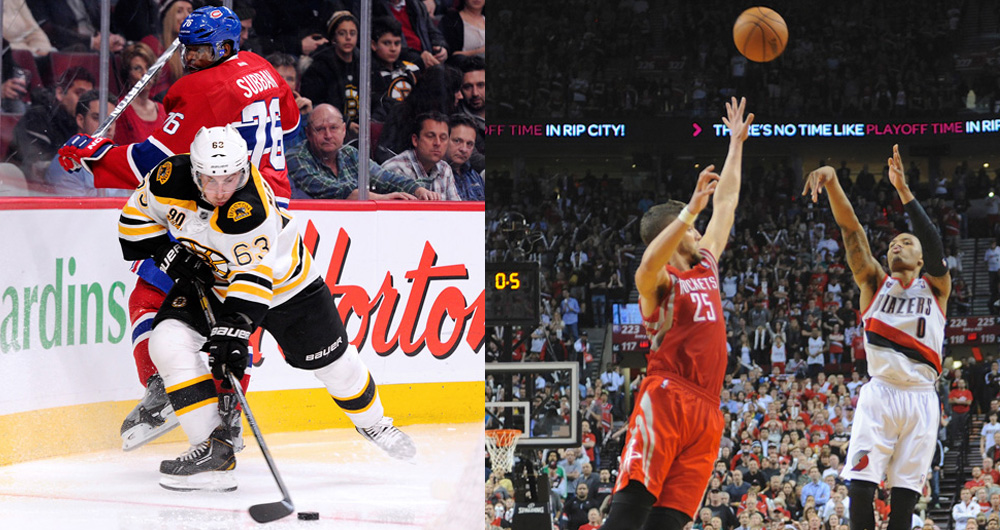 I grew up watching and worshipping the NBA. The league, and basketball in general, represented my gateway into sports geekdom. My first tangible sports memory is watching the Celtics dispatch the Philadelphia 76ers in the 1981 Eastern Conference Finals to the dulcet tones of Gil Santos and Bob Cousy on Channel 4 in Boston, at the ripe old age of 5. It would only get better, as the Celts were playoff regulars and championship contenders throughout the ‘80s, winning it all three times and making two other Finals appearances all while I turned from wide-eyed kindergartener to pimple-faced, middle school outcast. It was heaven.

Hockey came a little later for me. Yes, the ‘80s Bruins featured the otherworldly Ray Bourque and later, the great Cam Neely, and made the playoffs every year, reaching the Stanley Cup Finals in 1988 and again in 1990. But hockey season and basketball season overlapped almost completely and there wasn’t enough room in my scattered, childhood brain for both. So I stuck with hoops and never looked back.

The landscape is a bit different now. The only thing that’s truly the same is that I’m still a nerd. But I’ve grown to love, appreciate and even occasionally obsess over the NHL Playoffs over the past few years, which isn’t surprising given the Bruins move to the top of the league beginning in 2009-2010. Their stretch of the past five years (two Finals appearances, the first Cup since 1972) dovetailed nicely with the second Celtics Big Three era, an amazing, six-year run of championship-level basketball featuring the three best Cs players since those glorious, ‘80s teams as well as the best coach not named Red Auerbach in franchise history.

The Celtics didn’t reach the postseason this year, as we all know. But that doesn’t make the NBA playoffs any less compelling. The first round, which ended on Sunday, featured five of eight series that went the full allotment of seven games, with a sixth that only didn’t because Portland Trail Blazers point guard Damian Lillard is a fucking assassin. It should probably be noted here that only twice since 2003 have there been more seven-game series in the entire playoffs. And of course, the Bruins are in the midst of another potential Cup run and playing their archest of arch rivals, the Montreal Canadiens, in the process.

But you don’t have to pick one or the other. The NBA and NHL playoffs are both superior entertainments, equally capable of eliciting head-spinning, gut-wrenching, chunks-rising-up-the-gullet moments of equal parts awe, bliss and exasperation.

Why settle for just one when you can enjoy all the wonderment of both?

The Bruins current series with the Canadiens, which resumes tonight in Montreal tied at one game apiece, has already wrung some serious agita and spiked blood pressure levels through its first two contests. Game 1 went to double overtime and needed a furious third period comeback by the Bruins to get there while Game 2 required a four-goal explosion from the Bs, again in the third period, just to stave off having to travel north already down two games to none. If you found yourself not being able to breathe properly or longed for a big, fat tab of Xanax during any of these comebacks or extra periods, you are most assuredly not alone.

And while we’re here, PLAYOFF HOCKEY OVERTIME! Sudden death is the best way to handle overtime in any sport, which is a major reason why the NHL Playoffs always delivers. Every rush up and down the ice could potentially spell the end of the game or, if the circumstances dictate it, the end of one team’s season. The stakes couldn’t possibly be higher than that. Again, don’t be alarmed if scenarios such as these make you feel like you’re going to throw up. They’re supposed to, which is awesome. It’s like going on all the big boy rides at Six Flags, one after another, without having to leave the comfort of your own living room.

NBA playoff games don’t end in sudden death, can get far more bogged down in the later stages thanks to the litany of late timeouts called and even when they reach their most palpable, frantic extremes, still don’t feature the consistent up and down, back and forth pace of their NHL counterparts. But the intensity and energy of a competitive series can be just as mesmerizing, as this year’s opening round proved.

Alongside all those Game 7s, there were battles of will up and down the schedule every day for two weeks, from the Memphis/Oklahoma City series that featured four straight overtime games to the Houston/Portland tilt and its three OTs along with four of the series six games decided by five points or less. As was the case with Memphis/Oklahoma City, the Atlanta/Indiana series required the higher seed (the Pacers) needing to win a Game 6 on the road just to stay alive before finishing it off at home in Game 7. Both 8-seeds (Dallas and Atlanta) took their top-seeded counterparts (San Antonio and Indiana, respectively)  to seven games. A team like the Washington Wizards, who had won just one playoff series since 1982, made quick work out of postseason mainstay Chicago and two longtime NBA laughingstocks, the L.A. Clippers and the Golden State Warriors, staged arguably the most dramatic, competitive, back and forth series of them all, and that doesn’t include any of the off-court drama brought on by the Donald Sterling situation.

And again, best of them all, this:

There’s just as much excitement to be found in the NBA’s postseason as in the NHL’s. Neither is better, neither is worse. You can be a dyed-in-the-wool NBA nut and still go mental about the NHL playoffs and vice versa. There’s something for everyone in both tournaments, making for two incredible months of sporting paradise.

I just wish I’d figured that out sooner. Better late than never.

Enter to win a pair of tickets to attend The Hess Collection Seminar and Dinner as part of Boston Wine Festival 2018 at the Boston Harbor Hotel on Wednesday, March 14th. END_OF_DOCUMENT_TOKEN_TO_BE_REPLACED

The Black and Gold continue their run tonight at TD Garden. END_OF_DOCUMENT_TOKEN_TO_BE_REPLACED

Who will make the Class of 2018? END_OF_DOCUMENT_TOKEN_TO_BE_REPLACED

It’s been awhile since we talked Black and Gold. END_OF_DOCUMENT_TOKEN_TO_BE_REPLACED

You’re going to wish you were in the Northern Alps. END_OF_DOCUMENT_TOKEN_TO_BE_REPLACED