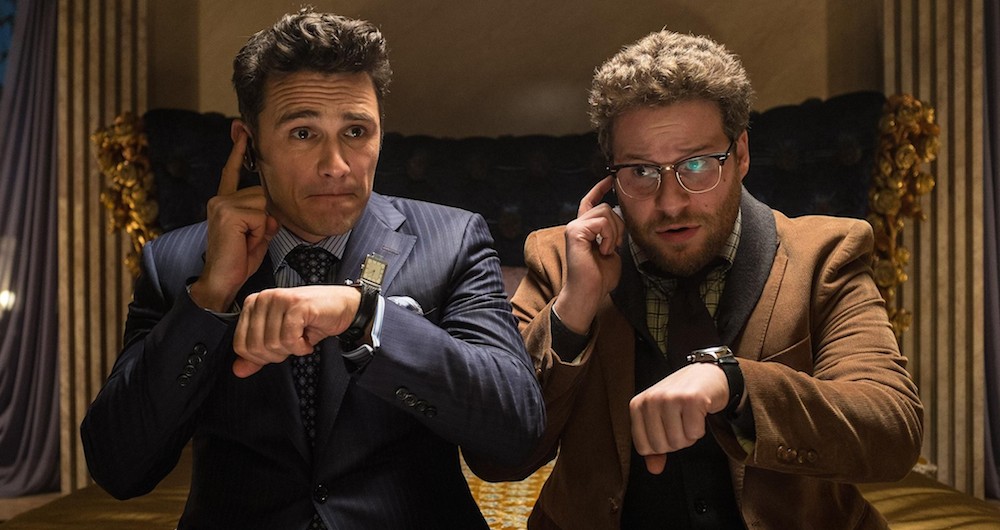 UPDATE (5:15 PM): Sony has canceled the scheduled December 25 release of James Franco and Seth Rogen’s new film “The Interview after the top five theater circuits in the U.S. announced they would not be screening the film.

———–
The top five theater circuits in the U.S. will not be showing James Franco and Seth Rogen’s new film “The Interview” amid threats from the Sony hacking group promising a 9-11 scenario for theaters that do not capitulate.

Regal Entertainment, AMC Entertainment, Cinemark, Carmike Cinemas and Cineplex Entertainment have all decided against showing the film, a comedy centered around Franco and Rogen’s bumbling attempts to assassinate North Korea’s Supreme Leader Kim Jun-Un, according to The Hollywood Reporter.

The change in heart came after the hacking group issued a threat to theaters planning to show “The Interview.”

“Remember the 11th of September 2001,” the message says. “We recommend you to keep yourself distant from the places at that time. (If your house is nearby, you’d better leave.) Whatever comes in the coming days is called by the greed of Sony Pictures Entertainment.”

Despite the fact that the Department of Homeland Security said they have not received a “credible threat,” theater chains weren’t taking any chances. Speaking to ABC, former White House counterterrorism advisor Richard Clarke said:

Somebody is playing mind games with [Sony]. I think North Korea has little or no capability to do any physical attacks, commando activity, or terrorism in the U.S. By saying it’s coming, however, they hope to keep people from the theaters and, thereby, hurt Sony’s revenue.

Sony previously told theater owners that any prior commitments to show the film would not have to be honored because of the ongoing situation, according to The Hollywood Reporter.

“Due to the wavering support of the film The Interview by Sony Pictures, as well as the ambiguous nature of any real or perceived security threats, Regal Entertainment Group has decided to delay the opening of the film in our theatres,” Regal said in a statement to THR Wednesday.

The National Association of Theater Owners, the trade association that represents theater owners nationwide, made a statement, saying that “individual cinema operators may decide to delay exhibition of the movie so that our guests may enjoy a safe holiday movie season experiencing the many other exciting films we have to offer.”

Whether theater owners give any credence to the terror threats, the Association’s acknowledgement that public fears over attending a theater showing “The Interview” could impact other films released over the holidays and individual theater’s holiday revenue means many may take the safe option and not screen it.

Golden Globe and Emmy nominee Benjamin Wallfisch is the composer responsible for the score of the hit movie IT. I talked to Ben about his approach to scoring the new version of this iconic story and his thoughts on film and music overall. Some very insightful commentary; listen in. END_OF_DOCUMENT_TOKEN_TO_BE_REPLACED

Rupert Gregson-Williams is an award-winning film composer. He just so happened to compose the score for this summer’s big blockbuster Wonder Woman. We talked about his beginnings in film scoring, film scores that move and inspire him and, of course, Wonder Woman. END_OF_DOCUMENT_TOKEN_TO_BE_REPLACED

Jeff Rapsis is a New England-based composer and performer. Lately, he’s been creating live musical scores for silent film screenings. I talked to him about his process and a few of his upcoming performances at The Capitol Theatre in Arlington and the Somerville Theatre. You can keep track of where else Jeff is scoring silent films here. END_OF_DOCUMENT_TOKEN_TO_BE_REPLACED

Planning on seeing Rogue One: A Star Wars Story when it opens this weekend? I joined Adam 12 to give you an idea of what to expect. But don’t worry, I didn’t give anything away. END_OF_DOCUMENT_TOKEN_TO_BE_REPLACED

No, not from afar, from the comfort of her couch. From the actual awards themselves. That’s where Meredith Goldstein was for the Oscars. She shared all the juicy, first-hand details with me. END_OF_DOCUMENT_TOKEN_TO_BE_REPLACED

To celebrate the opening of ‘The Force Awakens,’ I had some very special guests in studio to start the Thursday, December 17 edition of The Brink. Listen. END_OF_DOCUMENT_TOKEN_TO_BE_REPLACED

Watching the new Star Wars trailer a million times gave us all sorts of feels. And one of those feels was nostalgia. END_OF_DOCUMENT_TOKEN_TO_BE_REPLACED

END_OF_DOCUMENT_TOKEN_TO_BE_REPLACED

If you’ve finally finished crying over Inside Out — or Lava, the short that ran before it — Pixar is readying another assault on your tear ducts with The Good Dinosaur, if its newly released trailer is any indication. END_OF_DOCUMENT_TOKEN_TO_BE_REPLACED