Naming a band? Just dig through the pop culture garbage can 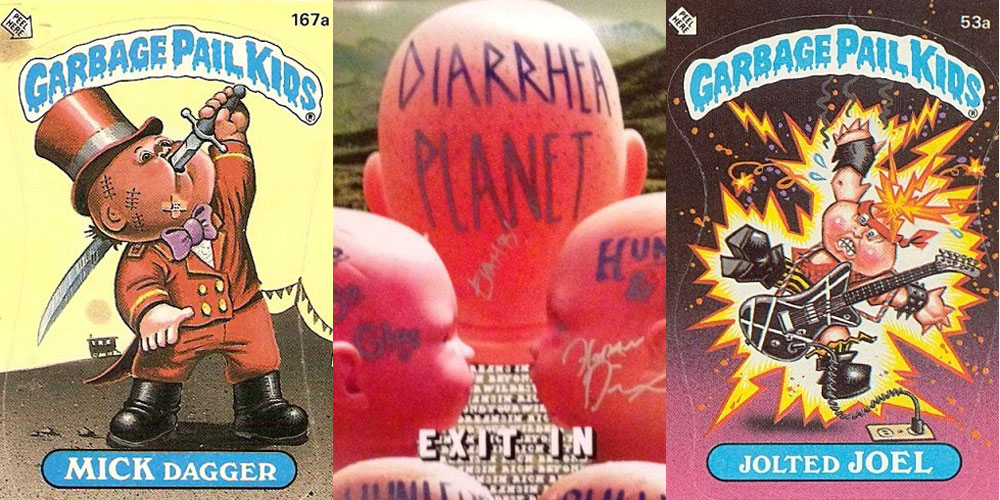 Any exploration into the nature of band names isn’t going to end well. Most sound pretty bad at first. Band names are like baby names; they only sound “right” once you actually get to know the child. The bar was also set quite low at the onset of rock history. The Beatles and the Beach Boys are two of the greatest bands ever — yet both have terrible names. Little would the world know that a mere 50 years later, bands with names like Diarrhea Planet would be soon be lining up for our time’s equivalent of the “Ed Sullivan Show.”

By punk’s emergence, it became commonplace for bands seeking a moniker to troll through the alleys of culture — kind of like the names of the notorious Garbage Pail Kids trading cards of the 1980s. Take Camper Van Beethoven, for example. Instead of paying tribute to some blues singer (like Pink Floyd) or a famous poet (Bob Dylan), the ‘80s group came up with a portmanteau that combined the surname of the godlike composer and the goofy mode of transportation. Camper Van Beethoven’s name fit perfectly with the legacy of prankster names — from The Stooges and Flipper through Huggy Bear and The Twerps — reminding us that by the time of punk, it was cool to be self-consciously dumb and funny. And unlike the case of Elvis Costello (who paid tribute to Elvis Presley with his moniker) Camper Van Beethoven didn’t really care about paying tribute to a musical giant. It just sounded funny and was easy to remember. Ask ‘80s acts Propagandhi and Mojo Nixon if they really were being reverent towards Gandhi or Nixon with their names. Or better yet, ask Jello Biafra, who not only took the name of an odd and slightly scary food product for his moniker, but also sang in one of the most irreverently-named bands of all time, the Dead Kennedys.

So why are they “Garbage Pail” names? Created in the wake of the Cabbage Patch Kids dolls phenomenon (if you remember, everyone had to have one in 1983), Garbage Pail Kids cards and stickers commented on the vapidness of commercialism by depicting cute, bubbly dolls each maimed, compromised, or otherwise made grotesque in some twisted fashion. Cards came in pairs of two, with each Garbage Pail Kid’s name alluding to a particular malady or condition. “Adam Bomb” had an exploding mushroom cloud head. “Guillo Tina” waited to have her head chopped off. “Valerie Vomit” puked in her soup. Some represented real people (“Greta Garbage,” “Salvatore Dolly”). Some even referenced musicians, like “Mick Dagger” (a failed and impaled sword-swallower), “Crystal Gale” (the country singer as a frostbitten snowman), and “Cindy Lopper (the “twin” card to “Guillo Tina”). Eventually, the cards were sued by the Cabbage Patch toymakers in 1986, but the damage was already done.

With each card more disgusting than the one before it, Garbage Pail Kids were also popular among children like their cabbage-spawned cousins. This should have surprised no one. As any kid knows, being gross gets you attention. This applies to bands, too. And many of these kind of warped, ironically detached “Garbage Pail” band names are still with us today.

Current splash du jour, Nashville’s Diarrhea Planet, might be on to something with their ridiculously gross name. No one wants to say they went on their first date at a Diarrhea Planet concert, but did you forget the name? Dreadfully-named Brooklyn punk band Cerebral Ballzy might be on to something, too. These attention-seeking tactics do work. They worked for Texas band Butthole Surfers. They even worked to some degree for Boston’s own An*l C*nt (even though perhaps the world’s most tastelessly named act weren’t ever going to get their song in a car rental commercial).

Not all of the current Garbage Pail bands are so revolting, though; many charm us with their use of classic GPK-esque warped puns. Australian electronic musician Nicholas Murphy performs under the moniker Chet Faker, painting a picture of the late jazz trumpeter playing plagiarized scales. One underground act out of Baltimore, Salvia Plath, brings us the vaunted poet curled up and giggly in a pile of plant leaves. Recent Boston-based electro-psych act Truman Peyote conjures an image of the cherubic writer blazed out of his mind in the middle of the desert. College rapper Hoodie Allen has a name that would send the treasured director jumping off the Brooklyn Bridge — fresh sneakers and Yankees cap in tow.

But perhaps the most notable of all the current Garbage Pail bands is Welsh jangle-core band Joanna Gruesome. Not only do these guys paint fangs and green skin on another artist in the indie scene, but one who is actually still working right now. Joanna Newsom has only put out three records. This isn’t exactly mining through the musty culture of yesteryear. This is mining 2006.

In selecting a Garbage Pail band name, an artist might earn a little street cred, a little name recognition, and maybe a cheap laugh, but like the decision to get a face tattoo, there might also be a bit of a career ceiling that he or she sets for themselves. For some, this might be acceptable — even desirable. Not everyone wants to be in a band that moms like too. But it could be that some artists might not actually believe that they can offend or even have an effect on greater culture anymore. Culture, which at one time seemed more streamlined and easy to impact, has become increasingly bulky and immovable.

On one hand, we have a Billboard Top 100 that is controlled by the “1 percent” of very powerful artists and very, very few ultra-powerful major labels. On the other hand, there are the tens of thousands of artists (the 99 percent) making music for peanuts, many not really thinking that their efforts are going to go anywhere. Some of the most recent Garbage Pail bands are responding to this with jokey monikers that feel just as empty as their prospects.

Take the case of New Jersey-based electronic artist Seth Haley, who makes his music under the name Com Truise. While it could be said that such a letter-switching “spoonerism” is just word-play (unlike with Garbage Pail Kids, the pun here is meaningless), it is significant to think about Haley’s choice of a target. In the league of Oprah Winfrey and Kim Kardashian, the all-powerful ubiquity of Tom Cruise’s celebrity perfectly represents that feeling of disconnection among pop culture’s top 1 percent.

“I’ve always been a fan of [Cruise], I guess. But I didn’t name the project after him for that reason,” said Haley in a recent interview with redbull.com. “It was just a silly joke, at first. It sounds like a robot’s name to me. But, if I knew back then that I’d be making music the way I am now ― playing around the world and stuff ― maybe I would’ve chosen a different name.”

Cruise not ubiquitous enough? Another German-based electronic artist calls himself Jichael Mackson — daring some kind of copyright infringement (or at least dirty look from the Jackson clan). Yet another (this one a Canadian) goes by the name of Ill Gates. It’s hard to imagine how Bill Gates could be much of a musical influence but his brand alone does represent the absolute top .00001 percent of the power-rich. Detroit-based indie-rockers Dale Earnhardt Jr. Jr. get meta by veering into an icon of mainstream American entertainment that no one would ever associate with indie rock — NASCAR racing.

“We started this project with the intention of having an outlet to make anything we could dream up. We also started with little thought of ever releasing the music so the name was just a funny afterthought,” says Dale Earnhardt Jr. Jr. on its website’s FAQ. “It’s better than Counting Crows Part 2 which was the other alternative.”

While it’s fair that these names are chosen for a goof, half the fun of this kind of analysis is questioning why artists gravitate toward certain aesthetic decisions over time — even if the decisions appear to be casual on the surface. It’s not just Tom Cruise for no reason. And of these really are “funny afterthoughts,” then why are these anti-jokes aimed not at literary figures or musical figures or political figures, but at the richest and most vanilla figures contemporary culture has produced? Could it be a quiet act of rebellion? This is a question that could perhaps best be answered by “Garbage Patch Kids vol. 17” that might be coming out next year.

Because we are reminded that none of us are really as original as we’d like to be, no exploration into the nature of band names is ever going to end well. So on second thought, if you are still hoping to find an original band name, you might want to stay out of the garbage.