My Brightest Diamond’s Shara Worden, Embracing the Dance and Painting With Blue 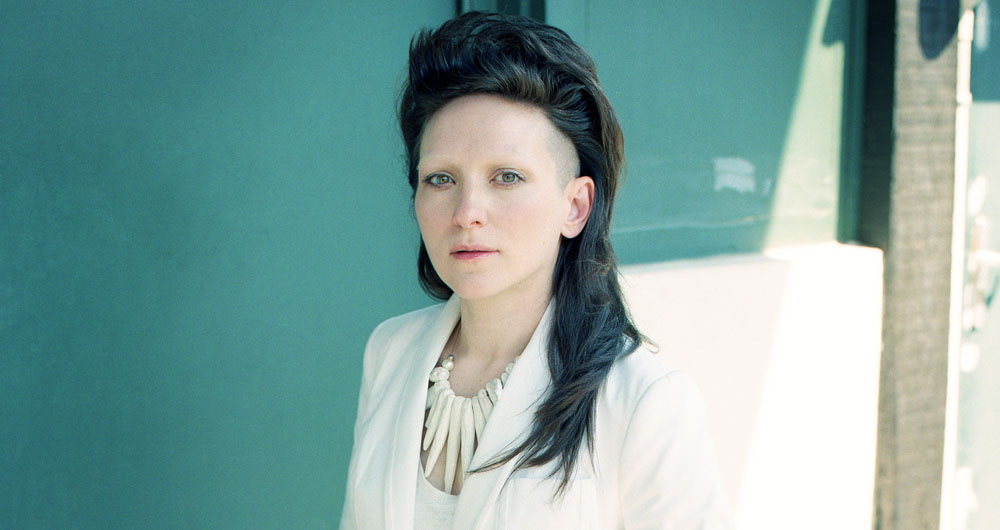 On “Pressure,” a bombastic track that pairs a Detroit marching band with orchestral trills, Shara Worden sings that one billion years pressing down forms a diamond. Yet, she notes that, “Dancing on top, the glitter glows/The pressure slows.” The image sums up Shara’s new album as My Brightest Diamond, “This is My Hand.” The record is a change from her earlier baroque rock; it’s a two-step into the club. Ahead of a show at The Sinclair on Monday, September 22, Shara offered this unbarred annotation of her new music and the importance of dance.

Starting a tour in Detroit
“It felt good to begin in Detroit, to have many friends there. What was sweet is that Detroit has such a dance culture. I mean, even though I’ve always known that, it was amazing to see. People were even taking solos! The show had lots of really fun dance moments.”

A shift from “All Things Will Unwind” (2011)
“The [new] music is built more for dance. I wanted a sense of the origin of music, and how people have used music in community. I’ve been thinking about Daniel Levitin’s The World in Six Songs, and Jared Diamond’s The Third Chimpanzee, ideas that humans were making music before even using words. Gather around the fire, doing dances, clapping together, and hearing from the shaman. So, I’m really excited for creating ways for people to participate. The last record was more of a listening record.”

Experiencing the body
“You know, this is such a transition record for me. I was imagining doing dance numbers, but I was unsure how to write dance music. Originally the song “This Is My Hand” was much less; it was four on the floor, and it was because I was so disengaged with my body.

Growing up Christian, there was much denial of the body- that it is bad, sinful. There’s not much, if any, talk of the body as being human or being a manifestation in the physical realm. As a woman, I also figured out at 19 that I wasn’t taken seriously when performing. It was all, “hey girl, just shake your ass.” In a way, I though that I had to prove I was smart in my music.

I’m finally at the point where I am more confident with who I am. This album is a way of accepting that I like dancing, and I want to acknowledge the experience of the body in what it means to be human. Going back, the album was reclaiming my body for myself, in a ritual way.”

Community and the ineffable
“Let me tell you something, the church is not really ready for me. I’m a bit of a freak, and I have tried my whole life. But, I’m no longer willing to have panic attacks in the bathroom.

The quest of my life is to be a question asker, to explore. I’ve created community for myself, but no longer is it in a meeting. Meetings are based on a need to feel comfortable, which means a lack of diversity. Now, I’m in a season where I’m not looking for a space for me to express or discover or contribute because the community does not want to hear from me. They want to be comfortable. And I don’t want to be in the bathroom anymore. Obviously, it’s been very painful. I guess that I’m quite sad about it. At the same time, I’m OK with it.

This record is in part about how I can facilitate connections, especially to the nameless thing. The song “Shape” is very much about that. How, the nameless-one is speaking through each person. We all have the desire to gather together, a desire to seek after the unseen power that holds all existence together. We have this longing, but I’m no longer going to look for that in a meeting.”

Urban agriculture
“I moved, so I’m no longer in the farming community. Occasionally I’ll go over to the old house and weed the flowerbeds I built for my son. There’s so much happening in Detroit, professional famers and all; it’s exploding on that front.”

Returning to Brooklyn (or Berlin)
“I’m fascinated with Detroit, even as much of my musical life was in Brooklyn. My drummer is still in Berlin, and I want to start reading more about the connections with Berlin and Detroit. Kraftwerk were listening to the Detroit electronic music scene before they started performing, so there’s been a long-standing conversation between the cities.”

Painting with blue
“My music has historically been more lyrically and harmonically driven. But pop music is melodic and rhythmically driven. The new album is just starting from the premise of beats.

It’s like painting. Say your drums are blue, harmony is red, and the lyrics are green. Maybe you’ve been using a lot of green, but now it’s time to start using more blue in my paintings.”

Enter to win tickets to see Trio Da Kali at The Villa Victoria Center of the Arts (Newton, MA) on April 10th. END_OF_DOCUMENT_TOKEN_TO_BE_REPLACED

END_OF_DOCUMENT_TOKEN_TO_BE_REPLACED

Enter to win tickets to Rhye at The Paradise on February 28th. END_OF_DOCUMENT_TOKEN_TO_BE_REPLACED

Her new album has been pushed back, but we have Kimbra’s new single for you. END_OF_DOCUMENT_TOKEN_TO_BE_REPLACED

The folk duo returns with a new record this week. END_OF_DOCUMENT_TOKEN_TO_BE_REPLACED

Now that we’re done looking back at 2017, let’s look ahead at 2018. END_OF_DOCUMENT_TOKEN_TO_BE_REPLACED

Our first Song of the Week for 2018. END_OF_DOCUMENT_TOKEN_TO_BE_REPLACED

In a year when so many things were off, the music was right on. END_OF_DOCUMENT_TOKEN_TO_BE_REPLACED