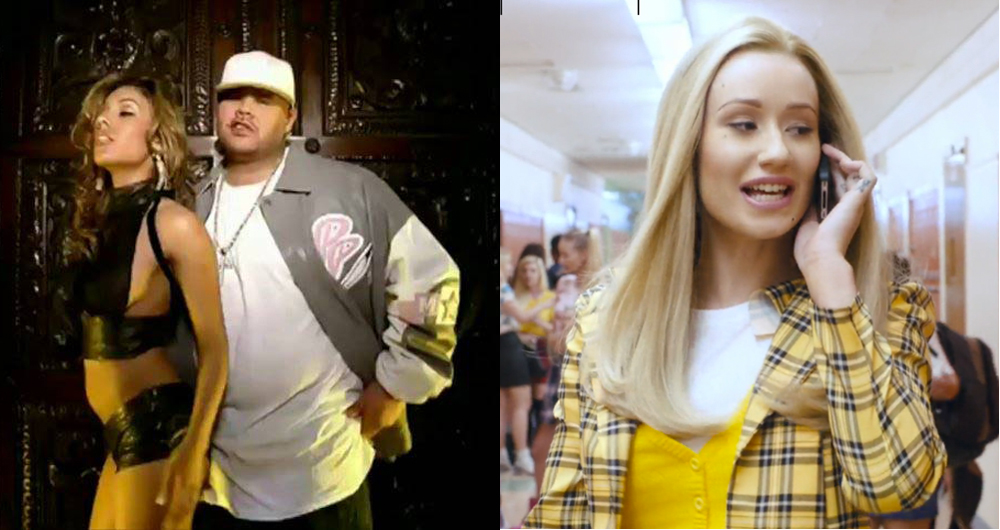 Well folks, summer is upon us once again.  As Matthew McConaughey says in “True Detective,” “time is a flat circle,” and this philosophical concept certainly holds true to summer jams as well.  Just look back at the songs of summer ’04 (a time of personal innocence and naïveté) and then shift your gaze to those of this upcoming summer (a time of crushing and smothering adulthood), and you may want to do a dramatic spit-take.  Is the vast expanse of time occurring simultaneously on different planes?  Is my iPhone stuck on repeat?  Either way, it appears that some trends never die.

Lil’ Jon’s raspy, hoarse shouts and exclamations of “okay!” will reverberate through the halls of time. But, over the course of ten years, some things have changed. On “Yeah!,” he serves more as Usher’s hype man than anything (some great hyping, though). On “Turn Down for What,” however, Lil, Jon’s voice has become the muse around which hard-hitting trap music coils itself. The hype man is now the hype.
We’ve all got problems, and it turns out Jay-Z and Ariana Grande do, too. Stars—they’re just like us! And it appears they’d rather not deal with the “struggle” of a relationship or significant other. Jay-Z has SO MANY PROBLEMS (drug possession, possible jail time, ya know), but at least he doesn’t have to go home at the end of the day to the old ball and chain, although time has a way of changing things (see: Beyoncé). Ariana Grande keeps saying that she’s got “one less problem without you,” but she just won’t shut up about this person. Like us, they just love talking about their problems.
It appears the queen of pop’s star only continues to rise, promising a long and fruitful reign. And as long as she sits on the throne, there will continue to be sexed-up hits coming from the speakers. In “Naughty Girl,” she’s just “feeling sexy” (duh) and decides to get naughty for the night, although, as we can all see, it’s been much longer than one night. I recently described the music video for “Partition” as pure sex, and the song isn’t far off. Who knew monogamous relationships could be so aggressively sexual? If time has proven anything, it’s that Beyoncé’s still got it, in all the right (or “wrong”) ways.
Who doesn’t love a great adjective?! One of the many perks of the English language (and others), and Britney Spears and Iggy Azalea (along with Charli XCX) know what I’m talking about. Toxic: acting as, or having the effect of, a poison; poisonous. Britney reappropriates the meaning of the word to apply it to a man and their relationship, getting intoxicated by his “loving” and all that. Fancy: expensive and fashionable; complicated or having a lot of decoration. Iggy puffs herself up throughout the song, while Charli throws the word around like it’s her job. Time has shown that pop stars can be wordsmiths, too.
The Fugees are an endless fountain of inspiration, even to one-hit wonder hacks like Mario Winans and Billboard tyrants like Trey Songz. “I Don’t Wanna Know” samples the Fugees’ hit single “Ready Or Not,” which itself sampled a slowed-down sample of an Enya track. “Na Na” is built around the same chorus as the Fugees’ “Fu-Gee-La.” The Fugees loved sampling others, and it appears that the turds of the pop music game love sampling the Fugees sampling others.
Summer lovin’ is a blast! Until it’s all over. But that’s what Alicia Keys and Sam Smith are here for. “If I Ain’t Got You” is the typical Alicia Keys-sitting-at-her-piano ballad, but it’s a great listen when you’re cradling yourself on a blanket alone in a park under the sun. Sam Smith (the male answer to Adele) is bad at one night stands, and if you’re like him, you’ll empathize with his British forlornness and eat a whole thing of Ben & Jerry’s on your worn-out couch. We’ve all dealt with insignificant and fleeting sadness over the years, and Alicia Keys and Sam Smith just want to be there for you when it strikes.
People have loved getting turnt up since the very beginning of human civilization (looking at you, Ancient Greeks). And a rap song is one of the most surefire ways to get people throbbing, wobbling, and the like. “Lean Back” was cool back when many of us were still learning what rap was and could be, and it crowded the dance floors of many eighth grade semi-formals. “Move That Dope” is cool now when many of us post-grads are working paycheck to paycheck, filling our heads with fantasies of making it rain and hanging out with Pharrell’s Gandalf hat. But, when it comes down to it, they both just want to make you dust off the old boombox and blast it out of your bedroom window, and will continue to do so until the end of time.