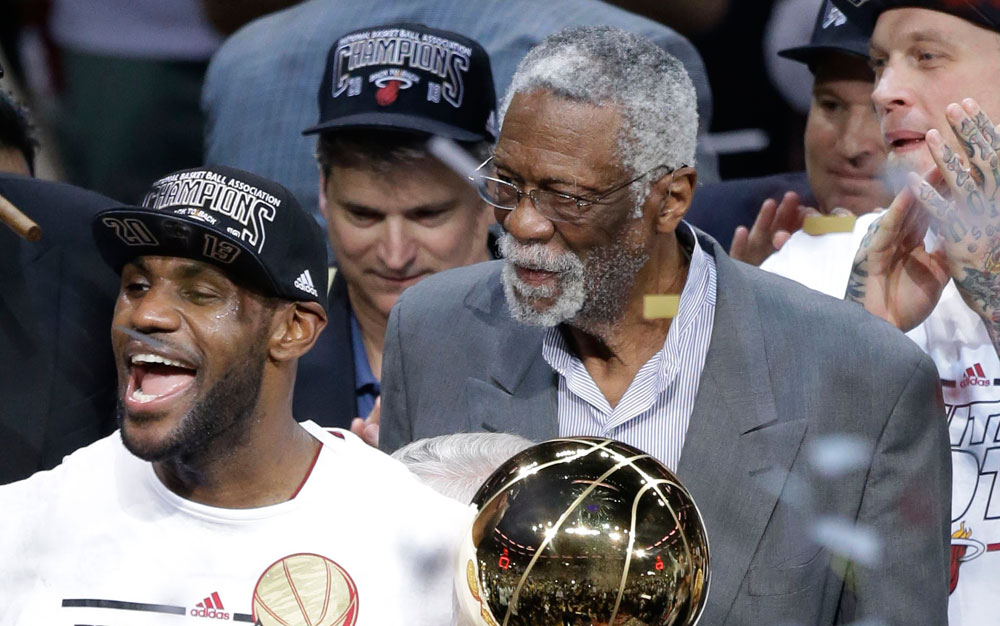 In this corner, we have LeBron James, the greatest basketball player in all the land. And in this corner, we have Bill Russell, the greatest winner in the history of team sports and a consensus, top-three player in NBA history. Not surprisingly, Russell comes out on top in this particular fight. The root of this throw-down stems from the recent NBA All-Star Weekend, where a rather silly narrative involving who belongs on the NBA’s hypothetical Mt. Rushmore was manufactured.

James named Michael Jordan, Larry Bird, Magic Johnson, and Oscar Robertson to his fictional mountain. But to leave out Russell — owner of 11 NBA championship rings, two NCAA titles, and an Olympic gold medal — suggests a massive brain fart at best and mind-blowing ignorance at worst, regardless of the topic’s lack of gravity or lasting impact.

No one has ever accused LeBron of having a healthy sense of self-awareness. “The Decision,” his made-for-ESPN, televised event announcing his choice of the Miami Heat as his free agency destination in the summer of 2010, was one of the most narcissistic, tone-deaf spectacles in the all-time annals of sports television and succeeded only in portraying its star as a clown who had unwittingly turned himself into one of the league’s biggest villains.

LeBron has made some very positive strides in this regard since “The Decision,” appearing humbled by the gobs of virulent criticism rained down on him in response to such a gigantic, public ego trip. He also made the very smart choice to let his performance on the court do the majority of his talking and has ascended to the heights always assumed for him, getting over the hump and winning his first ring in 2012 and then another last season.

All of the accolades showered upon LeBron regarding his time in Miami are richly deserved. He’s become a transcendent player, one of the all-time greats, and a two-time champion since taking his talents to South Beach. Even Celtics’ fans must admit this, however begrudgingly. But overlooking Bill Russell in a discussion about the greatest players in history? That’s some seriously misguided shit.

This wasn’t the first time LeBron crapped on Russell, whether inadvertently or not. Back when he signed with the Heat, he announced that he’d be changing his jersey number from 23 to 6 to honor Michael Jordan, stating that the NBA should retire the No. 23 out of reverence and respect for His Airness. But choosing Russell’s number to switch to while simultaneously praising Jordan’s all-time place in the game reeked of short-sightedness, as well as a lack of perspective or basic knowledge regarding the history of the sport. Again, ignorance.

Maybe it’s a Celtics thing. LeBron is on record noting his distaste for the C’s, who were a longtime thorn in his side and the last hurdle he needed to clear to reach the NBA’s most hallowed ground. His performance in Game 6 of the 2012 Eastern Conference Finals on the floor of the TD Garden with the Heat facing elimination ranks as one of the greatest single game showings ever. His game that night (which, for the record, was the most insane individual performance I’ve ever seen) had to have felt at least a little bit more special given all of the surrounding circumstances.

Still, taking into account the inherent silliness of the whole Mt. Rushmore debate, whatever his rationale (even if it boils down to simple forgetfulness), it’s not a terribly good look.

For his part, Russell, who is the most well-regarded, revered, and respected living NBA player, past or present, responded to LeBron perfectly. No sanctimony, no perniciousness, no passive aggression.

And maybe a little well-deserved wag of a finger adorned with one of those 11 rings, too.

The Black and Gold continue their run tonight at TD Garden. END_OF_DOCUMENT_TOKEN_TO_BE_REPLACED

Who will make the Class of 2018? END_OF_DOCUMENT_TOKEN_TO_BE_REPLACED

It’s been awhile since we talked Black and Gold. END_OF_DOCUMENT_TOKEN_TO_BE_REPLACED

You’re going to wish you were in the Northern Alps. END_OF_DOCUMENT_TOKEN_TO_BE_REPLACED

END_OF_DOCUMENT_TOKEN_TO_BE_REPLACED

Bill might be “on to Tennessee,” but we’re not. END_OF_DOCUMENT_TOKEN_TO_BE_REPLACED