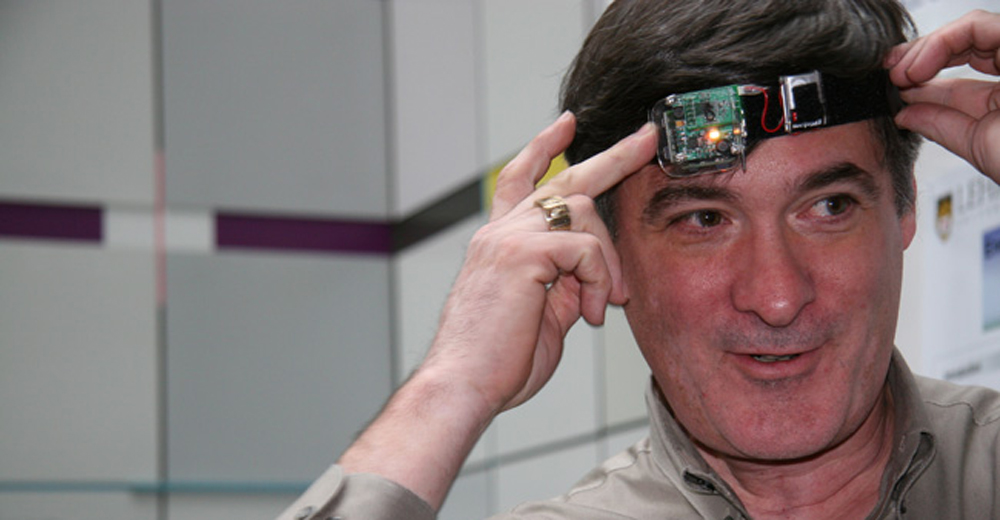 To nab an interview with MIT Professor Joseph Paradiso, in any capacity, is an occurrence to be grateful for. When he is not spearheading the state of the art Responsive Environments group at the MIT Media Lab, he is educating others about his work with sensors, human-computer interaction, and synthesizers. As soon as Paradiso grants me a sliver of his time to talk shop, his loquacious nature forces me to listen fast and comprehend faster.

First thing on the agenda: his upcoming appearance at Moogfest, a five-day festival dedicated to the merging of technology, art, and music. It’s scheduled to take place in North Carolina later this month.

“The speakers are great, the bands are famous. I basically built and designed the largest home-made modular synthesizer since well, probably ever. They knew about the work I did and were impressed.” Soon, he honed in on his planned Moog presentation. “It’s going to explore electronic music and how we interact with it in different ways.  I’m presenting on the future of musical instruments, and I’ve invited 5 other friends from the Media Lab universe to talk about everything from music and social media to musical toys and robots . We’ll explore what they do.”

The man’s career hinges on the navigation of technology, making his involvement with MIT’s Media Lab seamlessly organic. “The Media Lab was established around the idea of convergence—that is, the converging of all media into what computers become. We can read newspapers, watch videos, and listen to music all on one device now.  He goes on to describe what the Lab conveys to the world in the larger sense. “The Lab is based around radical invention and it means a lot of things—how our environment is changing now, and how it is going to be in 20 years.” And in order to foster a community that encourages ground-breaking ideas, the Media Lab arms itself with some of the best and brightest around. “The students here are exceptional—they are very motivated, extremely versatile, and very smart. Everyone’s always open to trying new ideas, there are no attitudes. We’ve got some killer engineers, some well rounded computer scientists, and a few physicists. Most of them do something else besides technology, like music. We’ve also got some great visual artists who are also amazing technologists.”

Paradiso is also scheduled to speak at this year’s Together Festival, which—like Moogfest—celebrates the joining of music and machinery. The Professor is genuinely relieved that Beantown is finally warming up to this genre as a whole. “It’s nice that Boston has a few places to see this kind of music – for example, I’m a real fan of the Non-Event scene here (http://www.nonevent.org/). Compared to New York, it’s not at the level it could be, as we have such a pool of talent and interest here.” But Paradiso, whose professional momentum is unwavering, has no intentions of letting up. “The way people perform and listen to music is changing. Our job is to make it better and invent its future.”

Enter to win tickets to see Trio Da Kali at The Villa Victoria Center of the Arts (Newton, MA) on April 10th. END_OF_DOCUMENT_TOKEN_TO_BE_REPLACED

END_OF_DOCUMENT_TOKEN_TO_BE_REPLACED

Enter to win tickets to Rhye at The Paradise on February 28th. END_OF_DOCUMENT_TOKEN_TO_BE_REPLACED

Her new album has been pushed back, but we have Kimbra’s new single for you. END_OF_DOCUMENT_TOKEN_TO_BE_REPLACED

The folk duo returns with a new record this week. END_OF_DOCUMENT_TOKEN_TO_BE_REPLACED

Now that we’re done looking back at 2017, let’s look ahead at 2018. END_OF_DOCUMENT_TOKEN_TO_BE_REPLACED

Our first Song of the Week for 2018. END_OF_DOCUMENT_TOKEN_TO_BE_REPLACED

In a year when so many things were off, the music was right on. END_OF_DOCUMENT_TOKEN_TO_BE_REPLACED