This meteorologist wrote a letter to viewers who body-shamed her. Oh, and she’s pregnant with twins.

Katie Fehlinger is an on-air meteorologist at CBS 3 and The CW Philly. She’s also pregnant, expecting twin girls by September 13.

Because she appears on TV regularly, both she and her viewers have watched her pregnancy develop on the news.

“It’s been really cool because you’re kind of documenting everything as it unfolds,” Fehlinger said. “What really has been neat for me more than anything is that I feel like I’m sharing the experience with everybody.”

She’s received all kinds of congratulatory and encouraging comments on social media from her viewers.

@katiefehlinger yay! I watch you every morning I can't wait to see pictures. You were radiant throughout!

“It brightens your day when you can hear people respond to you,” Fehlinger said.

And then there are the straight-up uncalled-for messages, such as when Fehlinger says someone called her a “sausage in a casing.”

“That particular comment, about the sausage in a casing, that actually came closer to the end of my second trimester,” Fehlinger said. “So I’ve grown even more since then, obviously. And I never responded to it; I blocked the person. I just attempted to move on from it and forget about it, but it really hurt my feelings and still continues to bother me to this day.”

Then, earlier this week, she says she received another unprovoked comment on social media, one that said, “Sticking your pregnant abdomen out like that is disgusting.”

“All of a sudden it was like a switch flipped for me and I had a moment of clarity where, I didn’t get embarrassed or self-conscious from that, I just got really fed up by it. And I think what bothered me so much was that it didn’t feel personal this time. I really felt as though it was almost like the straw breaking the camel’s back on that final comment where all of these comments combined felt as though they were being directed toward every women who has ever gone through the rigors of pregnancy.” 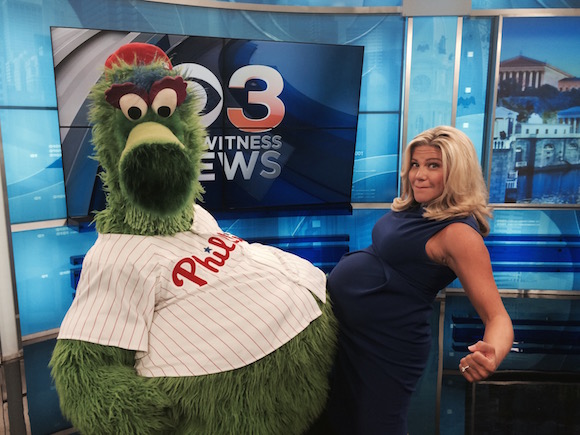 That’s when Fehlinger wrote an open letter “to all the haters,” which she posted on her Facebook page.

Since sharing it Wednesday morning, it’s gotten nearly 26,000 likes and more than 2,100 shares.

“This little manifesto of sorts is dedicated to every mother out there—other pregnant moms-to-be, moms reading this while their toddlers play on the swing set, moms whose kids have long since gone off to college… You are beautiful,” she wrote. “Even during the most uncomfortable—and let’s face it, less than glamorous—symptoms of pregnancy, what women go through to bring their precious children into the world is, simply put, AMAZING and you should be lauded.” 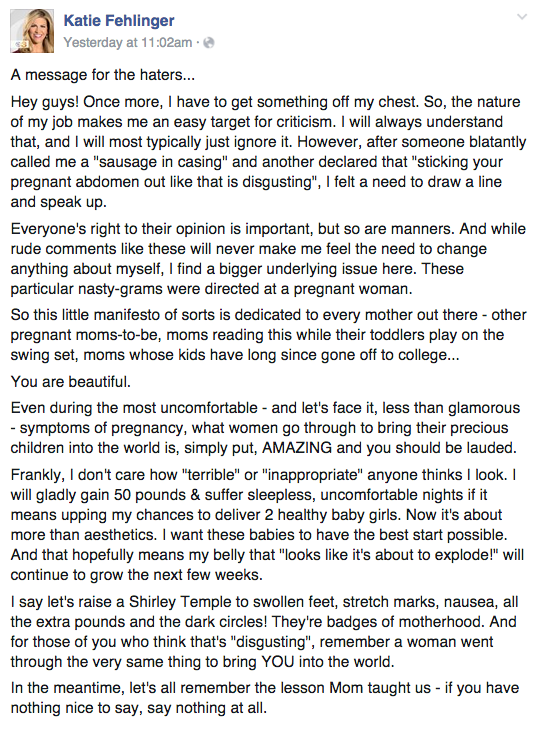 “Frankly, I don’t care how ‘terrible’ or ‘inappropriate’ anyone thinks I look,” Fehlinger continued in the post. “I will gladly gain 50 pounds and suffer sleepless, uncomfortable nights if it means upping my chances to deliver two healthy baby girls. Now it’s about more than aesthetics.”

“I want these babies to have the best start possible. And that hopefully means my belly that ‘looks like it’s about to explode!’ will continue to grow the next few weeks.” 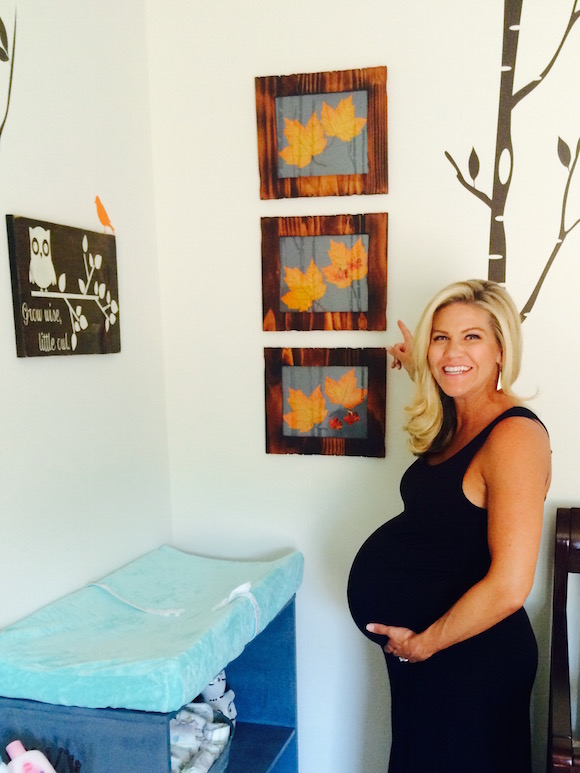 Fehlinger said she originally wrote the letter just to get her feelings off her chest, and she couldn’t believe the response she got from it.

“I don’t think that we’ll necessarily ever see the insensitive side of the Internet go away. It’s always going to be there,” she said. “ But at the same time, just the sheer response to that post—which I never expected, by the way—just proves to me that positivity overwhelmingly outweighs the negative.”

After all, Fehlinger said, this is a topic everyone in the world can relate to.

“Everyone has a mom. Every human being on planet Earth is here because a woman went through this journey to bring them here,” she said. “That, for me, is why this whole nine months should totally be celebrated rather than shamed.”

@katiefehlinger Are you pregnant or just gained weight???

Hint – it's 1 of these: I'm smuggling a basketball. I've been drinking way to much beer. I'm about to deliver twins. https://t.co/fbRyBwiIYH