Meryl Streep: I was reluctant to play Oscar-nominated role in ‘August: Osage County’ 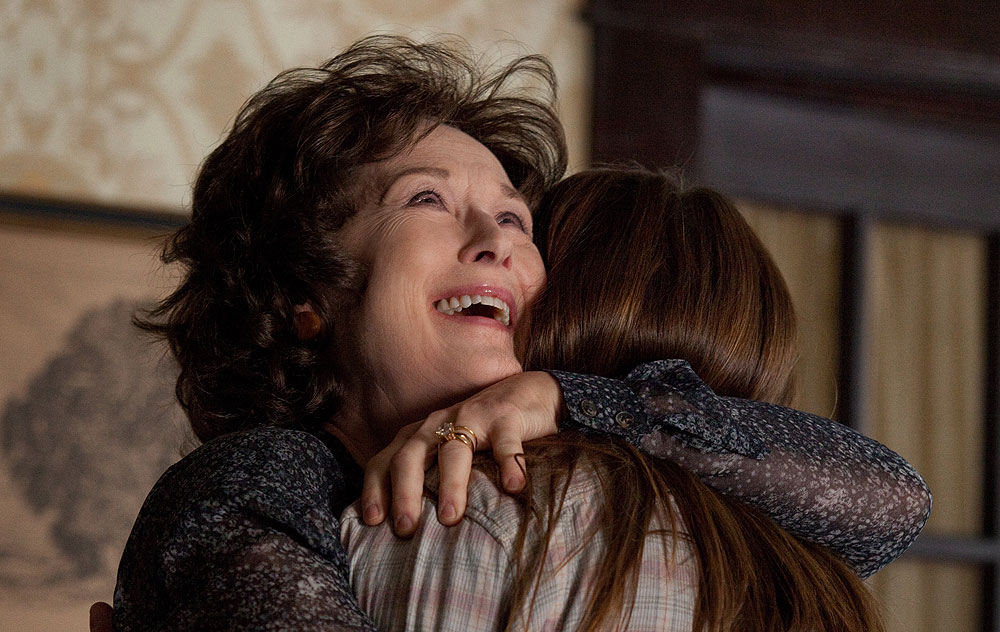 First known as a Broadway play, “August: Osage County” provides a humorous look at a dysfunctional family in Oklahoma torn with heartache, addiction, and lost relationships. Streep exquisitely plays Violet, a strong-willed and contentious woman suffering from mouth cancer and addicted to narcotics. When her husband goes missing, Violet’s life unravels as she calls her sister and three daughters for support. The family has drifted apart over the years, but with their return to Violet’s home, old wounds are opened. But Streep admitted that she had reservations with the part.

“I initially resisted doing the part because…on so many levels — physically, mentally, spiritually, emotionally — Violet is enraged and/or in pain or drugged,” she said. “It wasn’t the most joyous experience from my point of view. It was hard to feel that way about everybody (hating everyone). Also, I was smoking non-stop which really makes you feel shitty.”

In trying to understand her character, Streep said, “One of the things that really interested me was where she was in any given point in the cycle of pain and pain relief. Where she was on her pain killers cycle… And since we were shooting out of order, I sort of had to map that in a way just so I would know what level of attention or inattention I could bring my fellow actors.”

Violet directed a lot of her anger at her eldest daughter Barbara, played by Julia Roberts. These characters have numerous verbal blows and even a physical fight. For Roberts, having to attack Streep, one of her idols, was bizarre.

“I always had to look her right in the eye before we parted ways [at the of the day] to make sure we are all good. We are kidding, right?” Roberts said while giving Streep an evil stare.

The secret to the authenticity of the family was the closeness of the full cast. Streep gave credit to the director John Wells (“The Company Men”) saying, “You don’t get a vote who is in your family, but John was like God, and you know he put this group of people together and thought, ‘Oh, this will get messy,’ and it was really masterfully done.”

As they were filming in Oklahoma, the cast stayed in an unoccupied apartment complex where they really made an effort to bond with one another by living together while on location.

“We actually became a family together,” said Margo Martindale, who plays Violet’s sister, Mattie Fae. “We actually watched television together, cooked together, ate together, laughed together, and worried about Hurricane Sandy together. It was an incredible experience that really made for the perfect environment for the ensemble of actors to do this beautiful screenplay.”

Streep mocked George Clooney, one of the film’s producers, saying, “It was my idea to live in the condo villages behind the Toyota dealership. Yes! George Clooney opted out of our living accommodations. Didn’t he now! He is so important.”

Besides the impeccable yet dark acting (hey, it warranted both Streep and Roberts Oscar nominations), John Wells and Pulitzer Prize winning writer Tracy Letts were concerned about the comedy of the film.

“It was very important to us to try to preserve the humor of the piece,” Letts said. “You know I always sort of felt that the secret to the success of ‘August: Osage County’ was the humor in it. It is quite often when plays are turned into films the humor is lost…if that happens with ‘August’ we’re dead because it would be impossible for an audience to watch if it were not for the humor. As long as you’re laughing, you’re listening.”

Wells also said he had apprehensions, saying, “That was a big fear when we first started to screen the film: Would anybody laugh?” Wells was so concerned about not losing the humor of the original play that he watched a video recording of it with the script in hand and highlighted every single laugh.

“In our cutting of our piece [the film], we only cut two parts that had laughs and saved every single laugh for that reason,” he said.

Streep waxed philosophical about the humor of movie saying, “There are times we come together with family and friends and have an experience that is not funny and possibly even painful while it is happening. But when we are able retell the story, we begin to notice that it becomes funny.  So it is in these moments that we realize that we have transformed our lives just by noticing it isn’t as painful as we once thought.”

The play version of “August: Osage County” won a Tony Award and a Pulitzer for its writer. Will Meryl Streep and Julia Roberts receive awards for their exceptional acting at tonight’s Academy Awards?

Golden Globe and Emmy nominee Benjamin Wallfisch is the composer responsible for the score of the hit movie IT. I talked to Ben about his approach to scoring the new version of this iconic story and his thoughts on film and music overall. Some very insightful commentary; listen in. END_OF_DOCUMENT_TOKEN_TO_BE_REPLACED

Rupert Gregson-Williams is an award-winning film composer. He just so happened to compose the score for this summer’s big blockbuster Wonder Woman. We talked about his beginnings in film scoring, film scores that move and inspire him and, of course, Wonder Woman. END_OF_DOCUMENT_TOKEN_TO_BE_REPLACED

Jeff Rapsis is a New England-based composer and performer. Lately, he’s been creating live musical scores for silent film screenings. I talked to him about his process and a few of his upcoming performances at The Capitol Theatre in Arlington and the Somerville Theatre. You can keep track of where else Jeff is scoring silent films here. END_OF_DOCUMENT_TOKEN_TO_BE_REPLACED

Planning on seeing Rogue One: A Star Wars Story when it opens this weekend? I joined Adam 12 to give you an idea of what to expect. But don’t worry, I didn’t give anything away. END_OF_DOCUMENT_TOKEN_TO_BE_REPLACED

No, not from afar, from the comfort of her couch. From the actual awards themselves. That’s where Meredith Goldstein was for the Oscars. She shared all the juicy, first-hand details with me. END_OF_DOCUMENT_TOKEN_TO_BE_REPLACED

To celebrate the opening of ‘The Force Awakens,’ I had some very special guests in studio to start the Thursday, December 17 edition of The Brink. Listen. END_OF_DOCUMENT_TOKEN_TO_BE_REPLACED

Watching the new Star Wars trailer a million times gave us all sorts of feels. And one of those feels was nostalgia. END_OF_DOCUMENT_TOKEN_TO_BE_REPLACED

END_OF_DOCUMENT_TOKEN_TO_BE_REPLACED

If you’ve finally finished crying over Inside Out — or Lava, the short that ran before it — Pixar is readying another assault on your tear ducts with The Good Dinosaur, if its newly released trailer is any indication. END_OF_DOCUMENT_TOKEN_TO_BE_REPLACED