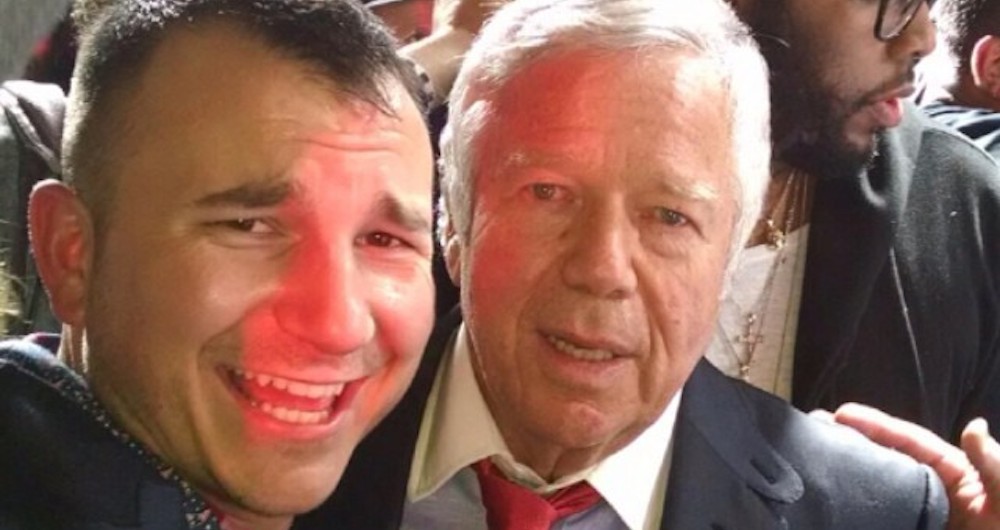 It’s the Southie version of The Hangover: Four Boston transplants living in Los Angeles decide to road trip to Arizona for the Super Bowl with no tickets, no plan, and no fear. They watched the Super Bowl with Gronk’s brothers, snuck into and got kicked out of the same bar three times, partied with Bob Kraft and Rick Ross, ended up on TMZ, and spent enough on Ubers to buy themselves a car. And according to them, it was all worth it.

Boston rapper Nat Anglin moved to Los Angeles on New Years Day hoping to further his music and acting career and help some fellow Boston transplant friends with their website, BosAngeles, a hub for anything Boston-related out in LA. And it was there that the quartet wrote about the ridiculous shenanigans they got into on their once-in-a-lifetime road trip.

Here’s the crew, Nat, Regal, Yancey, and Mike, setting off on their trip.

According to Anglin, after throwing a big bar bash for the AFC Championship game, he and the others agreed that they had to make the trek to Arizona no matter what.

“We’ve all rooted for the Patriots like any other Boston kids since we were children, he said. “Like the Sox or Bruins … it’s like a religion to us, not just a game, it’s who we are.”

So the group made it down to Glendale, where they found that Seahawks fans outnumbered Pats fans eight to one. Not that they cared.

They headed to watch the game at McFaddens, where they should have been charged $200 each to enter, but through a combination of fence-jumping, distraction tactics and good old-fashioned BSing, they made it in for $100 total.

“The cheapest ticket we saw to the game down there was 11,000 dollars,” Anglin said. “That’s a down payment on a house.”

Though they were kicked out of the bar for talking back to some Seahawks fans who were talking smack, they did find one or two Seattle fans worth hanging out with.

In the end, they partied with Gronk’s brothers… 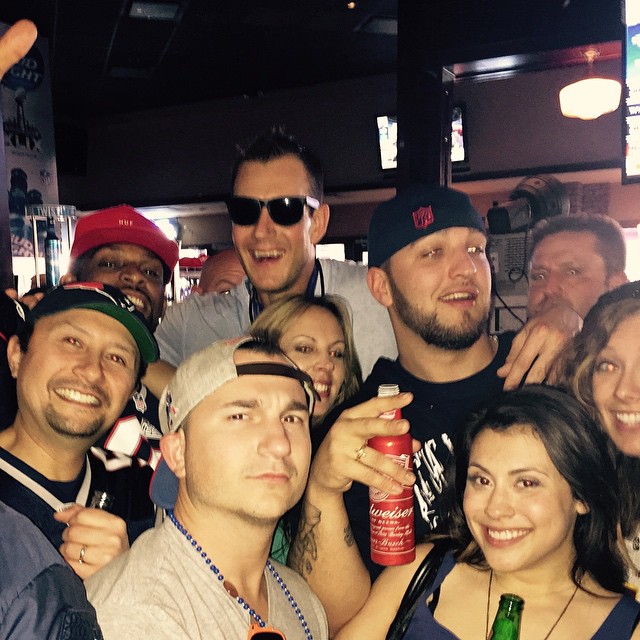 And serenaded Seattle-dominated bar with “Sweet Caroline” when the Patriots won.

But the night wasn’t over. Not by a long shot.The gang then decided to Uber their way to Chandler, Arizona for the Patriots victory party, despite having no inside connections, no knowledge of the hotel layout, and no plan. After lying to the Uber driver saying they were staying at the hotel so they could get past three police roadblocks, they found themselves in the hotel. But with security ready to intervene, some quick thinking was needed. Here’s how the gang describes it:

There were some people looking at us so Nat whipped his phone out and threw on his best Boston accent and began to yell into the phone:

“WHERE ARE THE [email protected]#%& RESERVATIONS. I HAVE HIS WHOLE FAMILY HERE HOLDING THEIR D%@$. I’VE BEEN HERE FOR AN HOUR WAITING INSIDE THE PARTY”

And with that, they were in. They hung around with Vince Wilfork…

Then they talked to Chandler Jones and his brother, UFC fighter Jon Bones Jones. 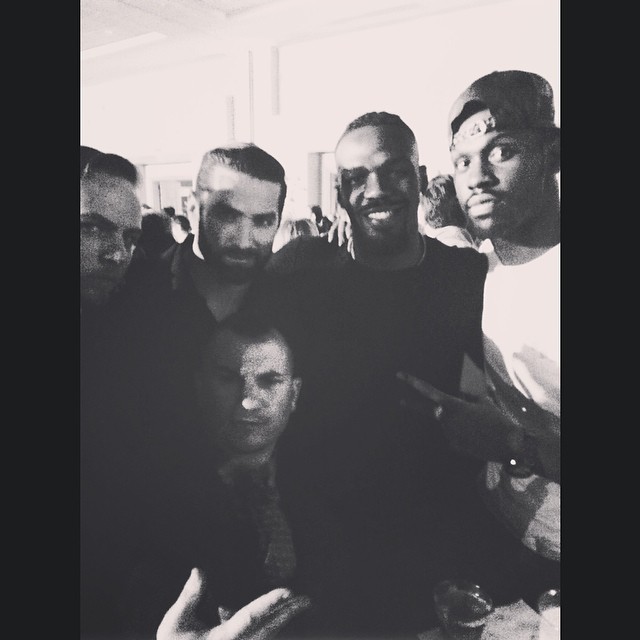 According to Anglin, the Jones brothers were probably the coolest to hang out with at the party.

“We hung out with them for a few minutes and talked about a variety of things,” Anglin said. “I asked Jon and Chandler if this Super Bowl win was gonna allow the Patriots players to talk as much smack as the Patriots fans will in the coming weeks. They laughed and Chandler basically said ‘Yup. And what are they gonna say to us now? We champions.'”

Eventually the dudes got up on stage with Bob Kraft and Rick Ross. 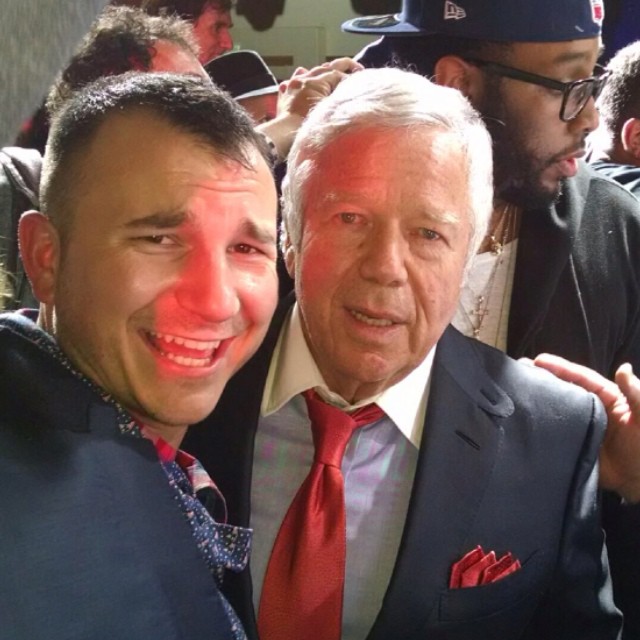 Somehow TMZ got the footage, and that’s when the boys starting getting calls from Boston friends. (That’s Anglin in the red Brady jersey and blazer clapping at the beginning of the clip.)

“Me popping up on TMZ was not in the plan but getting that phone call from Beantown Athletics in Dorchester was hilarious, Anglin said. “It was like, ‘Dude. YOU ARE ON TMZ!!!’. We had no idea.”

Though the gang had a blast, one of them, Yancey, bailed early, and paid the price with a solo Uber back to Glendale that cost him $255. 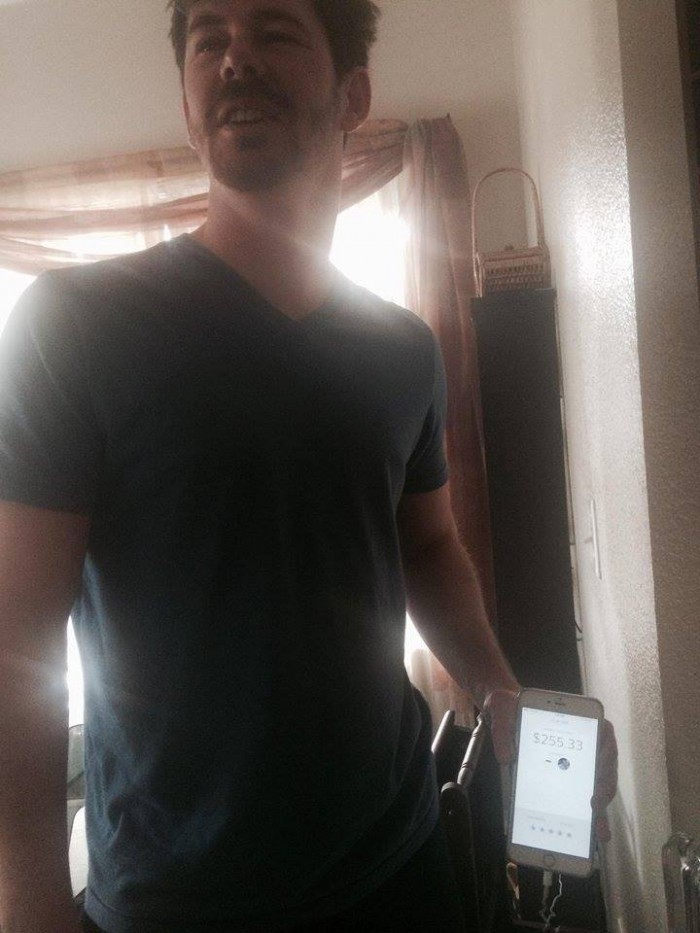 All in all, each of them spent between $500-700 on the trip, but say it was worth every penny. “We love the Patriots. We are so proud they won the Super Bowl,” Anglin said. “I just hope they know a couple of everyday Bostonians got in and had a great time.”

Enter to win a pair of tickets to attend The Hess Collection Seminar and Dinner as part of Boston Wine Festival 2018 at the Boston Harbor Hotel on Wednesday, March 14th. END_OF_DOCUMENT_TOKEN_TO_BE_REPLACED

Boston band Funeral Advantage is Tyler Kershaw. And Tyler Kershaw had a fun childhood, so it seems. END_OF_DOCUMENT_TOKEN_TO_BE_REPLACED

Perry put me on to daephne and the album blew my mind. END_OF_DOCUMENT_TOKEN_TO_BE_REPLACED

END_OF_DOCUMENT_TOKEN_TO_BE_REPLACED

Ted Regan of the family-owned and operated Mass Bay Lines joined me in studio this morning. This summer, Mass By Lines is celebrating their 50th anniversary by adding a variety of specialty cruises to their well-known Harbor Tours, Sunset Cruises, and Starlight Cruises. Click here to enter to win VIP passes that will get you on to any cruise for free for the entire summer! Click through to listen to my chat with Ted. END_OF_DOCUMENT_TOKEN_TO_BE_REPLACED