March Madness: 4 key things to consider when filling out your bracket 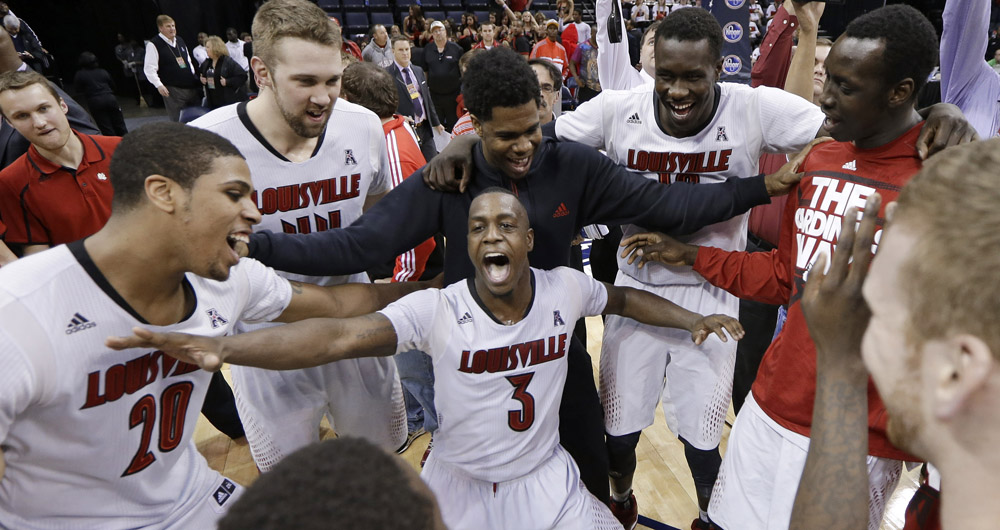 The brackets are set. The final step has been taken. Finally, after over four months of waiting, the best two and a half weeks on the sporting calendar commences tomorrow. It’s the Madness, the Big Dance, the NCAA Men’s Basketball Tournament. And it’s here.

On the heels of Selection Sunday, we now can begin filling out our brackets, entering pools, trying to win some of Warren Buffett’s money, and enjoy some of the most exciting basketball this side of the NBA playoffs. We went over some of the basics of deciphering the ins and outs of the tourney in this space on Friday so now we can go a bit more depth. Let’s take a look at some of the finer points of this year’s edition of the Madness, which will culminate in the Final Four at Cowboys Stadium in Dallas.

First though, a quick disclaimer: take the following advice at your own risk. Among the multitudes of inexact sciences in sports, picking a great NCAA tourney bracket is near the top of the list. Why do you think Buffett is putting up one of his many billions in exchange for a perfect sheet of picks? Anyway, read on, but don’t blame me if you’re out of your office pool by 5:00 on Thursday.

Remember, momentum is real. Teams that hit the tourney riding a winning streak are more likely to advance than teams who have struggled to keep their heads above water for the past few weeks. Bearing this in mind, keep a very serious eye on Michigan State (4-seed, East Region), Iowa State (3-seed, East Region), Louisville (4-seed, Midwest Region), UCLA (4-seed, South Region) and Florida (1-seed, South Region). There are plenty of other teams among the field of 68 who’ve been streaking, but these five, along with Michigan, Virginia, Duke, Creighton and UConn, are doing it as big time teams from power conferences, traditionally solid ingredients for making it to the Final Four. Still, as much of an advantage as teams like these have in the talent and pedigree department, don’t underestimate the power of…

They’re so dangerous. As mentioned the other day, there’s a team like Florida Gulf Coast or Norfolk State or Lehigh every year and chances are it’s going to play a big name school like Georgetown, which not only lost to FGCU last year, but dropped a game to 14-seed Ohio University in the first round in 2010. Again, lower or double digit seeds make waves in every single tournament and there is no shortage of scary, small-ish schools capable of making a run, a la Celtics coach Brad Stevens’ Butler Bulldogs in 2010 and 2011.

Start with Stephen F. Austin, a small school in Nacogdoches, Texas, with an enrollment of barely 12,000 students and an undefeated stretch that started before Thanksgiving.  The Lumberjacks finished the year 31-2 and didn’t lose a game in the tiny Southland conference all year long. They’re a 12-seed in the South region and have a very winnable first round game against Virginia Commonwealth on Friday. Don’t be surprised if they get at least as far as the weekend.  Other little guys with great chances to pull off an upset or two include North Dakota State (12-seed, West Region, one loss in its last 15 games), Western Michigan (14-seed, South Region) and North Carolina Central (14-seed, East Region). And don’t forget the ultimate mid-major, Wichita State, which made it to the Final Four last year, finished a tidy 34-0 this year, earned a No. 1 seed in the Midwest Region and was subsequently rewarded with a draw that also features Michigan and Louisville (two of last year’s other Final Four teams, one of which won it all) as well as Duke and Kentucky for its trouble. The Shockers will more than likely need to get past some combination of those teams. No wonder the Midwest has been anointed the title of being this year’s Group of Death.

Four New England schools will be dancing this week: UMass, UConn, Providence and Harvard. Of the four, the only one that doesn’t have a prayer is Providence (sorry, Friars fans). The Friars are an 11-seed in the East Region and have to play North Carolina in the first round on Friday night. While the Tar Heels are not their typical powerhouse selves this season and the Friars are coming off a nice, surprising Big East tournament title run, they wouldn’t even be here if not for that, as their 10-8 record since the new year will attest. So, if you like your local college hoops (which, sadly, puts you in the minority), the Minutemen, the Huskies and the Crimson are your new favorite teams.

UMass got off to its best start in years, winning 16 of its first 17 games, before leveling off and finishing the season 8-7. A 6-seed in the Midwest Region, the Minutemen get the winner of a play-in game between Iowa and Tennessee, two power conference teams only here because of their strength of schedule. It’s Round 2 where things could get sketchy, with a matchup against Duke looming should all go according to chalk. That’s probably going to mark the end of the road for the Minutemen and their great senior point guard Chaz Williams, but the program is in its best shape since the horrid John Calipari destroyed it in the mid-90s, thanks to the steady hand of seventh-year coach Derek Kellogg.

UConn, the 7-seed in the East Region now three years removed from its third national title and in its second year under former star player Kevin Ollie, has a date with St. Joseph’s, the surprise winner of the Atlantic-10 conference tourney in the first round on Thursday, with a likely meeting with former Big East blood rival Villanova after that, should the Huskies advance. They went 26-8 this year despite not being particularly great at anything, but they have a full-fledged stud in senior point guard (and Roxbury native/former Charlestown High star) Shabazz Napier. If the Huskies make it past St. Joe’s, they can definitely beat Villanova in no small part due to the familiarity that comes with being former conference rivals. Personally, I’m pulling for that matchup.

And then, there’s Harvard, which knows its way around the Madness after upsetting New Mexico as a 14-seed in the first round last year. The Crimson, the 12-seed in the East Region this time around, are as solid as any of the most dangerous mid-majors and should take care of their first round business again when they meet Cincinnati on Thursday afternoon. Unfortunately, in that scenario Michigan State is their likely second round opponent and the Spartans are as likely to win the whole Dance as anyone. It’s a really lousy matchup for the Crimson so don’t count on them advancing to the Sweet 16. Still, it’s tough not to appreciate how good Harvard has become under former Duke star and Coach K protégé Tommy Amaker. The Crimson are for real and they’re a tremendous story too.

It may only take you a few minutes to fill out a bracket but it’s never easy. Unless you’re picking schools on the basis of their team names (in which case, don’t even think about sleeping on the East Region’s 16-seed, the Coastal Carolina Chanticleers!!!), some modicum of thought usually helps. Yet this year, upon looking at the draw, the road to Dallas feels relatively straightforward.

In the East, despite Virginia’s stellar, dominant season, it’s tough to see the Cavaliers getting past 4-seed Michigan State, which was No. 1 in the country and widely regarded as the best team in the country earlier in the season before being ravaged by injuries. The Spartans were finally back at full strength just in time for the Big Ten tournament and responded by annihilating everyone in their path, including and especially Michigan, the regular season conference champions, in the finals.

The South features the tournament’s overall No. 1 seed in Florida and given the Gators’ draw, they could have a very easy run to Dallas for the Final Four. Their biggest threat is 2-seed Kansas, which may or may not have its dominant big man/potential NBA No. 1 overall pick Joel Embiid, whose been out with back troubles and hasn’t yet been cleared to return. If Embiid is back and playing at or near to his regular standards, the Jayhawks are the pick. If not, it’s Florida.

In the West, all roads lead through top seed Arizona, which hung around in the top 5 all year and spent a few solid weeks as the No. 1 ranked team in the country. The Wildcats have two great guards in Nick Johnson and T.J. McConnell, and a freshman monster in forward Aaron Gordon, who has been mentioned in the same breath as possible NBA No. 1 overall picks with along with the likes of Embiid, Duke’s Jabari Parker and Kansas’ Andrew Wiggins. Oregon, the region’s 7-seed, and 9-seed Oklahoma State, could play spoiler, and 2-seed Wisconsin is a very tough, defensive minded group. But this region is all about Arizona, which should cruise to Cowboys Stadium.

Finally, we have that Group of Death, the Midwest. There are no fewer than five teams of the 16 in this region who could not only get to the Final Four, but legitimately win the national championship. Of those five teams, the easiest to cross off are Kentucky (too inconsistent) and Duke (too one-dimensional, despite the presence of Parker). That leaves Wichita State and last year’s finalists, Michigan and Louisville. The Cardinals are as hot as any of the hot teams discussed earlier, but their body of work over the course of the entire season isn’t terribly impressive. The Wolverines were in play for a No. 1 seed given their stellar regular season and consistent presence in the top 10 all year, but they are a bit diminished from the group that led the National Championship game at halftime last year and stumbled badly in the Big Ten tourney finals against Michigan State. That leaves the Shockers, who are rested, experienced and, with those 34 straight wins, hotter than everyone. It will be a massive battle given the competition, but Wichita State is going back to the Final Four.

Unfortunately for the Shockers, though, just getting out of the Midwest will likely sap them of the energy required to win two more games in Dallas and they’ll have to settle for just a second consecutive national semifinal appearance. Arizona will take them down in that game and face Michigan State, which will beat either Florida or Kansas or any team that surprises and comes out of the South.

And in the title game? It’s Michigan State. The Spartans are deep, have multiple, experienced upperclassmen who play big, important minutes and have gotten healthy at just the right time. Michigan State has been to five Final Fours in 20 seasons under coach Tom Izzo, winning one national championship and reaching the title game on one other ocassion. The pedigree is there and this felt like the Spartans’ year early on before the injury bug hit. Assuming everyone can stay healthy for two more weeks, they will be champs.

So there you have it. Pick wisely, don’t take it too seriously and please, take all of this info with a grain of salt. Enjoy the Madness!

The Black and Gold continue their run tonight at TD Garden. END_OF_DOCUMENT_TOKEN_TO_BE_REPLACED

Who will make the Class of 2018? END_OF_DOCUMENT_TOKEN_TO_BE_REPLACED

It’s been awhile since we talked Black and Gold. END_OF_DOCUMENT_TOKEN_TO_BE_REPLACED

You’re going to wish you were in the Northern Alps. END_OF_DOCUMENT_TOKEN_TO_BE_REPLACED

END_OF_DOCUMENT_TOKEN_TO_BE_REPLACED

Bill might be “on to Tennessee,” but we’re not. END_OF_DOCUMENT_TOKEN_TO_BE_REPLACED