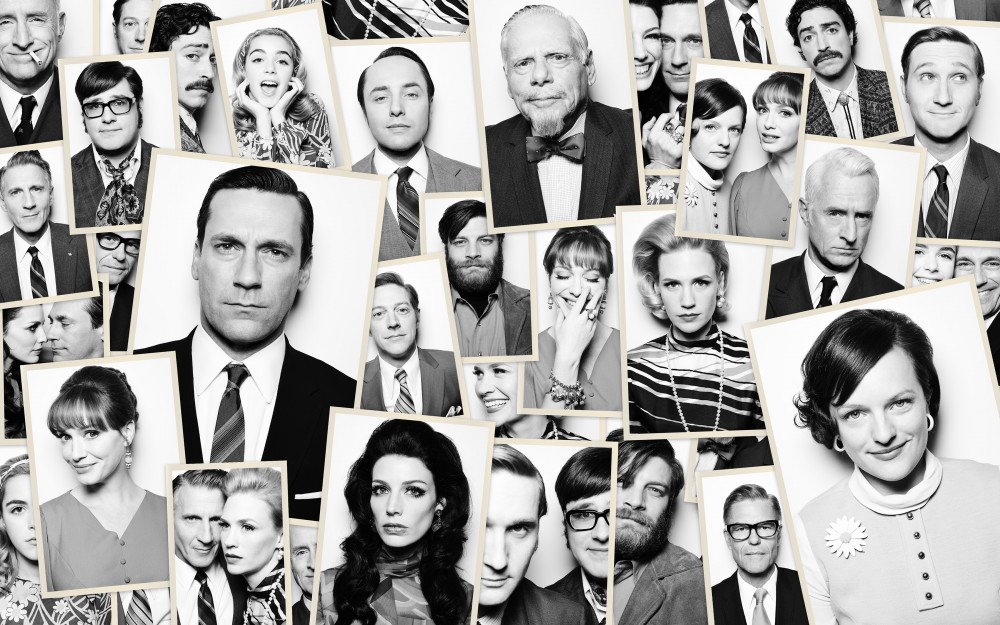 Mad Men returns to AMC for the second half of its final season Sunday. Matthew Weiner says the focus will be the main characters, so as to tie each of their story lines up before the finale.

But what if you can’t remember? Blame the scotch, or the ache of nostalgia, or the fact that the show hasn’t been on for months. Whatever the case, here’s our guide to the first half of the season, using the show’s stellar dialogue to lead the way.

“A VERY SENSITIVE PIECE OF HORSEFLESH”

Don spent the beginning of season seven borderline unemployed, ousted from the company, placed on involuntary “leave” following a disastrous pitch to Hershey’s. Don maintained the illusion of being employed, ghostwriting for SC&P through freelancer Freddie, and requesting Dawn maintain business as usual. He cut back on his drinking and the philandering. He kept Megan in the dark (She’s in L.A.! He bought her a new TV! Whatever!) for most of the season, but he worked hard to maintain a supportive and stable front while she tackled a failing acting career.

In episode 3, Don admitted the truth to Megan (it was received poorly) and demanded that Roger bring him back to SC&P, a competitive offer in-hand. It was painfully awkward. He accepted a lowly copy role under Lou Avery, with set terms and guidelines for client interaction. Jim Culter led a relentless campaign to have him removed. Lou rubbed salt in the wound. Megan called it quits in the vaguest way possible. And I wish all of this was more interesting.

But he had his work. And his talent. And his allies:Pete, Harry, Roger, and the computer.

Roger’s steamroom handiwork (we’ll get to that later) set up the framework that saved Don from expulsion, but it was a classic Draper pitch that prevented the company from falling apart.

Mid-way through, and Don appeared to be already humbled, just happy to be back at work. I guess it doesn’t take much when you’ve been kicked repeatedly while you’re down. While Don’s favor looked like it was on the up-and-up after he crashed a Phillip Morris meeting (in which he delivered masochistic manipulation to a team of rightfully skeptical tobacco executives with pleading eyes), he had yet to win over Peggy.

Is she his protégé or his equal? His superior or his competitor? Does she need to overcome her hero worship, or will she happily live in his shadow forever? Pete seemed to think the latter when he suggested that Don present Peggy’s Burger Chef pitch. 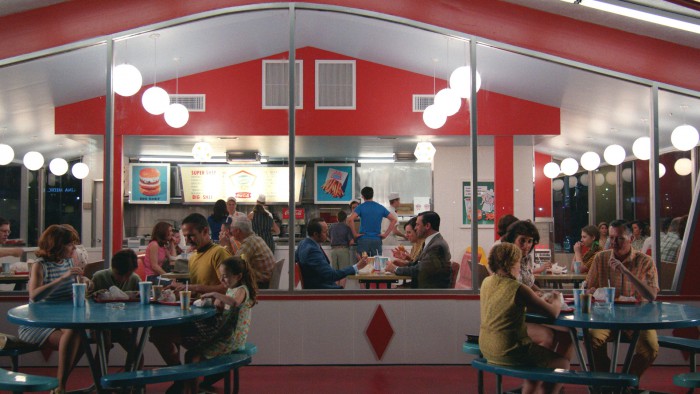 The pitch went like this: Burger Chef was a fast-food franchise (now owned by Hardee’s), teenagers and single folks grabbed a quick bite there, but parents did, too. Pete worked this account by highlighting that SC&P offered “a woman’s point of view – or whatever Peggy counts as,” for their target demographic: Mothers who feel terribly guilty about not being able to put a hot homemade dinner on the table for their husband and kids. Peggy’s pitch put Burger Chef in the position to relieve those mothers of that onset of shame. Supposedly.

Cut to Peggy and Don, late evening, back at SC&P. She realized her pitch was crap. Not because it was crap. But because Don can still deliver crap, and turn it into gold. And she’s not sure if she can do the same. Crap.

Peggy demanded Don tell her what he would do and what he thinks the pitch should be. She has a specific thirst for what makes him tick. Peggy’s personal confidence is comfortable though wavering, but her faith in her work within the industry comes with a barometer named Don Draper.

Honesty, humility, and a slow dance to “My Way,” motivated the two to formulate a new pitch, changing the focus on relieving the mother’s shame to just shifting the scenery. Inspiration really is found at home.

Note: The closing scene of “The Strategy” shows Don and Peggy sitting across from Pete at Burger Chef. It’s so iconic that it speaks for itself. I highly encourage you to re-watch it before Sunday.

While Don remained at the helm of the pitch, he passed the torch to Peggy at the eleventh hour. Following the news that Cooper’s death and Cutler’s swift recognition of a shift in partner votes can shove Don out the door, he asked Peggy to deliver for the clients instead. Landing the Burger Chef account would secure her role after he’s been ousted. We landed safely on the moon, after all. 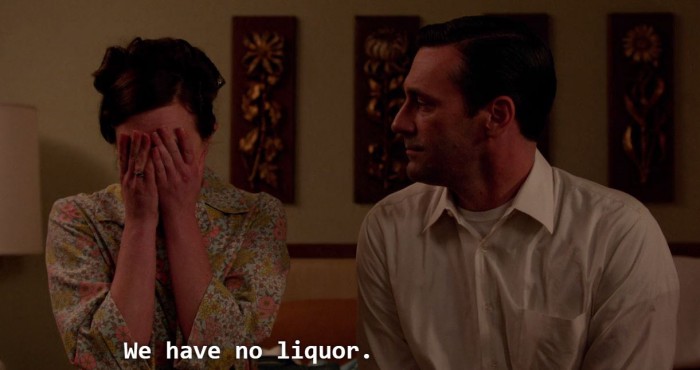 One thing to note: Joan has yet to forgive Don for screwing up SC&P’s public offering, and as a result costing her (hypothetically) millions. She was chilly following Don’s return and continued to undercut his tactical attempts to redeem himself in the eyes of the company, even voting for his removal following a breach of contract.

Not much happened for Joan in the first half of season 7. She was still filling an unclear role at SC&P: a partner without a purpose. By this point she has exceeded comfortable financial stability, but did little work to show for it. (Well, unspoken efforts aside.) Joan is in a tricky place where she feels personally obligated to justify her worth, but she lacks the professional obligation to do so. She’s like Roger, but since she wasn’t born into privilege, it riffles her.

She pulled some quick, backhanded negotiations that save the Butler Shoes account, but she’s back to reassigning the secretarial pool by episode 2. Joan’s significant contributions are often behind closed doors (remember the Avon debacle of season 6? Jaguar?), and the cards she holds, often come with questions of personal morality, rather than workplace ethics. 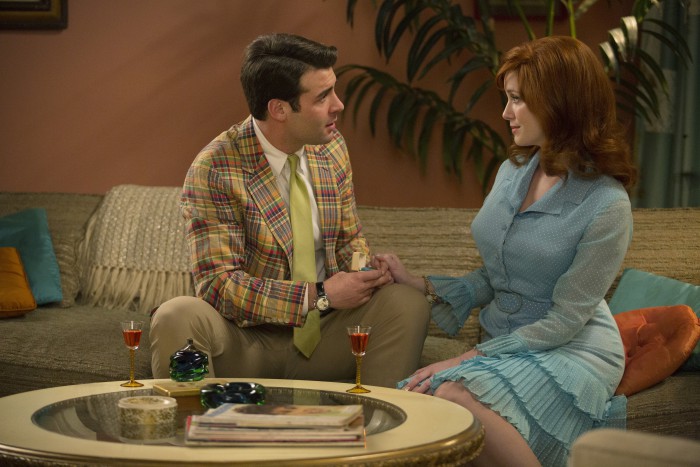 Bob Benson proposed at the end of the mid-season and revealed SC&P is about to lose Chevy, an account the agency spent most of season 6 schmoozing. (A car! A car! A ruse! A ruse!) The bevy of information sends Joan into shock. Bob is gay, and perhaps he thought she didn’t know. They were losing a critical account. Her partnership! Her millions! Joan’s heart is in her work, but her work is tumultuous, ambiguous, and unrewarding. Sigh.

The steady unraveling of the Francis marriage has been evident, following Betty’s quick slim-down and subsequent seduction of Don in the bunks of Bobby’s summer camp in season 6. Mrs. Francis is restless and miserable yet again. Henry was able to look past Betty’s shortcomings as a good mother, partner, and (tbh) human, but he couldn’t recover from her sudden outburst of harrowing political opinions during a neighborhood party. He didn’t sign up for this. Now they’re both insufferable.

Likewise, Sally and Betty’s relationship has always teetered a fine line, and now that she’s reached her teenage years, the combative dialogue has grown nastier and more cutting. When Sally came home with a broken nose (sword fighting with golf clubs, which could have happened to anyone!), Betty went completely ballistic. Sally rolled her eyes. Iterations of this interaction repeat throughout the season.

But then again, Sally’s a teenager. Teenagers are difficult. Sally is no different. Betty’s relationship with Bobby, however, was more telling. A field trip to the farm leads to an alarming blow-up between Betty and her young son. What began as a seemingly wonderful day (Betty milks a cow!), resulted in inexplicable acidic anger from Betty after Bobby gave away her sandwich to another child without a lunch. 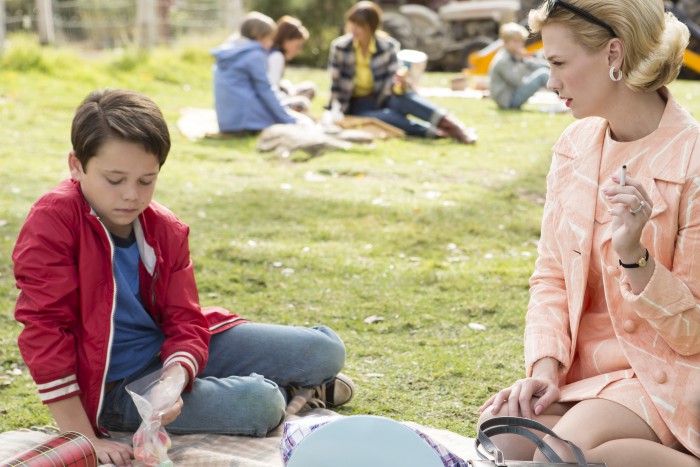 Examples of Betty’s emotionally abusive, selfish, child-like behavior have been documented throughout the series. She’s undeniably unlikeable. She lacks empathy. She might be a sociopath. When she refers to Don as an old “bad boyfriend” this season, I begin to wonder whether Betty will ever accept the responsibilities of adulthood and be the parent her children will come to need as they grow older. Or will they emotionally mature beyond her? Have they already?

Bert Cooper’s death left Roger in an interesting predicament. He lost a father figure, and a partner. Sterling Cooper lost its Cooper. Without Chevy, Roger’s stake in the account department is insignificant. Roger’s personal relationships need repairs, as well. His daughter ditched her high society life for a hippie commune. He slept his way through a string of LSD-laced freeloaders. In an essence, he’s lost.

It was his loyalty to Don that made him move on the McCann Erickson deal. The details of the merge were complicated, but significant. Here’s the gist of it:

And this is where we leave you. 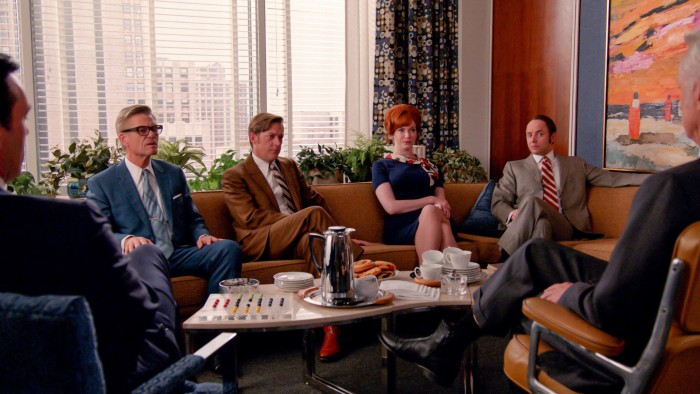 Weiner told the AP that the final episodes will focus on the main characters’ newfound wealth. Granted they were already rich. But this is richer than rich.

“‘We deal with the consequences of material success,’ he says, only hinting at what lies ahead for the agency’s newly well-to-do partners. ‘The incredible windfall they got at the end of last season wasn’t just a plot device. It is propelling them into these last seven episodes: Once all your material needs are met, what else is on your mind?’”

So what is left?

Check back Monday morning following the mid-season premiere, and we’ll begin to find out, together.