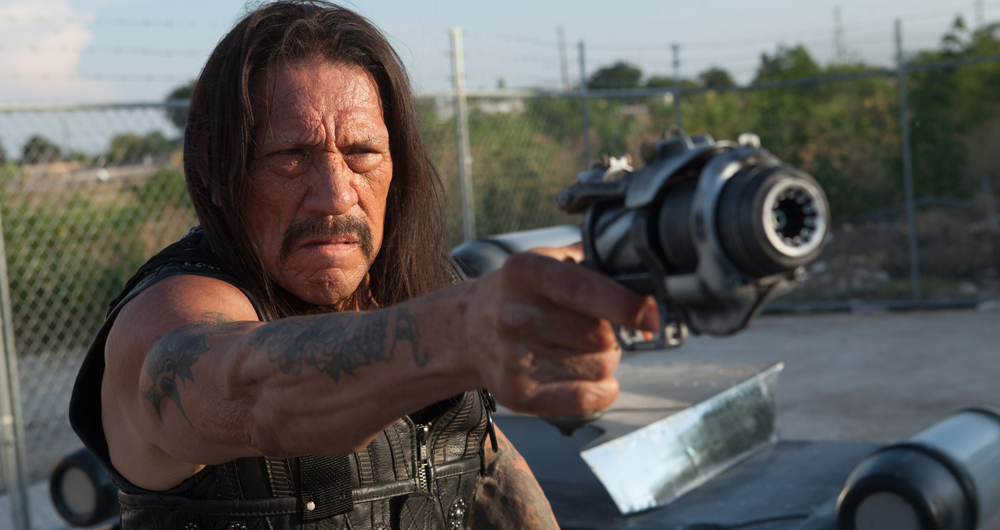 We’ve been wishing and hoping that Netflix would step it’s game up and give us a little more than the fifteen new episodes of TEDtalks that they decide to release every damn week, but no such luck. This week take your pick from the lot of so-so action movies, a twisted foreign flick, or an over-watched and overly-quoted standup performance.

“Machete Kills” (2013)
We all remember the intentionally corny prequel “Machete,” during which the seriously gruff looking Danny Trejo kills and maims anyone in his path as he tries to escape his own assassination. In “Machete Kills,” Trejo is at it again when the US government hires his character, Machete, to kill a Mexican revolutionary that has threatened the USA with a missile. Fans of the exploitation genre – think “Sin City” or “Grindhouse” – look no further for a weekend flick, “Machete Kills” delivers all the action, gore, nudity, and corny lines reminiscent of cheap B-list movies from the ’70s that you can take.

“Cocaine Cowboys Reloaded” (2014)
Ever wonder what it would be like if the episodes of “Miami Vice” were actually true stories? Well speculate no longer because “Cocaine Cowboys” is like a look into the real “Miami Vice,” as the stylized documentary takes us into the world of drug-run Miami circa 1970-80. “Cocaine Cowboys” shows the immense changes Miami went through as it discovered the drug cocaine, primarily interviewing three of the biggest characters during this drug and blood soaked era.

“Much Ado About Nothing” (2012)
In this modern transposition of Shakespeare’s play, well-known director Joss Whedon curates an entire acting ensemble that is consistently engaging and funny throughout. Having been filmed entirely at Whedon’s house, which is a beautiful location and is made all the better in glorious black and white film, “Much Ado About Nothing,” will have even the biggest Shakespearean novices engaged and entertained.

Another faintly hilarious action movie where Mark Wahlberg acts like a tough guy, and The Rock (Dwayne Johnson) can be seen almost ripping through his overly tight t-shirts as he takes care of business, kicking down doors and shooting huge guns.

“In the Name of” (2013)
Polish screenwriter, producer, and director Malgorzata Szumowska’s fifth feature film was inspired by an article she read in a newspaper, and tells the story about a Polish Catholic priest named Adam who has been moved from his position in Warsaw and transferred to a rural village where he, in addition to practicing and performing his duties as a priest, manages a center for disadvantaged young boys with his friend named Michal. Adam starts becoming friendly with a woman named Ewa while he is living there, but as Adam’s colleagues, the young boys he is working with, and the people who live there, she is unaware that Adam desires men and that his embrace of the priesthood has been a flight from his own sexuality.

“The Story of Luke” (2012)
This feel good movie tells the story of an autistic man named Luke, who, abandoned by his fearful mother at an early age and having grown up in a sheltered world, is thrown into a spin when his grandparents pass away over a cruelly short period of time. It quickly dawns on Luke that in order to carry on, he must start to take chances and live his life in the face of his underlying feeling of not being capable of doing so.

“Frozen Ground” (2013)
This flick was inspired by a real murder case about a man named Robert Hansen. Nicholas Cage plays an Alaska State trooper believes Hansen (John Cusack) is a serial killer who abducts young girls, tortures and sexually assaults them, then kills them. But Cage’s character doesn’t have enough evidence to get a search warrant for Hansen’s premises and seeks out a survived victim to help him close the case.

“Eddie Murphy: Delirious” (1983)
If you haven’t seen this, you do not know what you are missing. It’s classic Eddie Murphy; all the reasons and hilarity that made him a household comedic name. So many classic one liners, stories, and segways, from his infamous bits about the drunken uncle at the BBQ, GI Joe, Mr. T, Goony Goo Goo, and the ice cream man. This is one of those classic standup recordings that no matter who you are talking to and mention any of these bits to anyone who has seen this performance before they either won’t be able to keep a straight face and will burst out in laughter, or will recite the rest of the dialogue from the act. And that red outfit….

Golden Globe and Emmy nominee Benjamin Wallfisch is the composer responsible for the score of the hit movie IT. I talked to Ben about his approach to scoring the new version of this iconic story and his thoughts on film and music overall. Some very insightful commentary; listen in. END_OF_DOCUMENT_TOKEN_TO_BE_REPLACED

Rupert Gregson-Williams is an award-winning film composer. He just so happened to compose the score for this summer’s big blockbuster Wonder Woman. We talked about his beginnings in film scoring, film scores that move and inspire him and, of course, Wonder Woman. END_OF_DOCUMENT_TOKEN_TO_BE_REPLACED

Jeff Rapsis is a New England-based composer and performer. Lately, he’s been creating live musical scores for silent film screenings. I talked to him about his process and a few of his upcoming performances at The Capitol Theatre in Arlington and the Somerville Theatre. You can keep track of where else Jeff is scoring silent films here. END_OF_DOCUMENT_TOKEN_TO_BE_REPLACED

Planning on seeing Rogue One: A Star Wars Story when it opens this weekend? I joined Adam 12 to give you an idea of what to expect. But don’t worry, I didn’t give anything away. END_OF_DOCUMENT_TOKEN_TO_BE_REPLACED

No, not from afar, from the comfort of her couch. From the actual awards themselves. That’s where Meredith Goldstein was for the Oscars. She shared all the juicy, first-hand details with me. END_OF_DOCUMENT_TOKEN_TO_BE_REPLACED

To celebrate the opening of ‘The Force Awakens,’ I had some very special guests in studio to start the Thursday, December 17 edition of The Brink. Listen. END_OF_DOCUMENT_TOKEN_TO_BE_REPLACED

Watching the new Star Wars trailer a million times gave us all sorts of feels. And one of those feels was nostalgia. END_OF_DOCUMENT_TOKEN_TO_BE_REPLACED

END_OF_DOCUMENT_TOKEN_TO_BE_REPLACED

If you’ve finally finished crying over Inside Out — or Lava, the short that ran before it — Pixar is readying another assault on your tear ducts with The Good Dinosaur, if its newly released trailer is any indication. END_OF_DOCUMENT_TOKEN_TO_BE_REPLACED