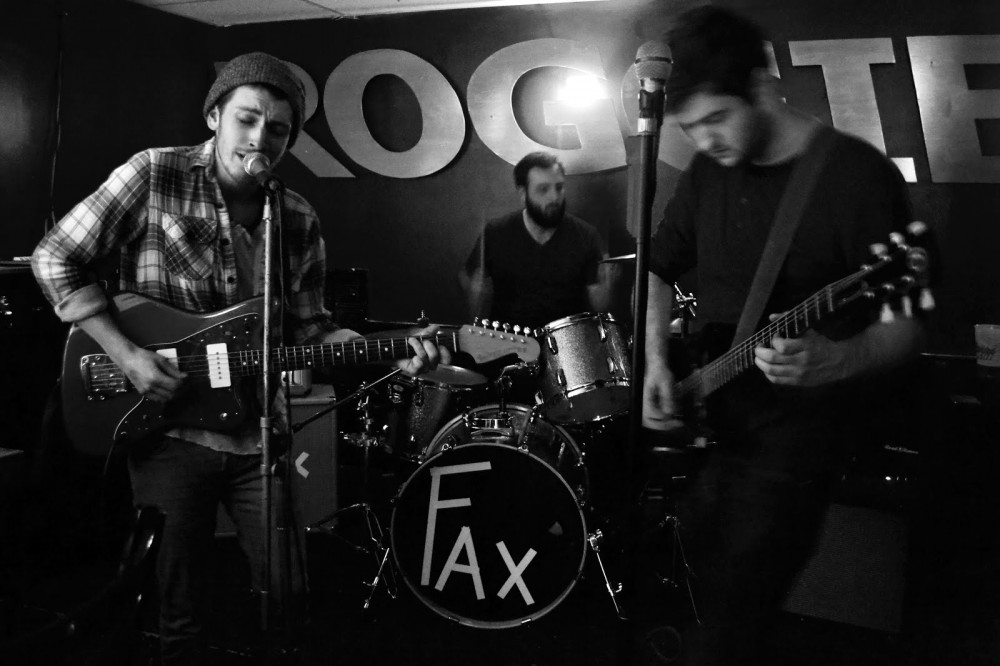 We’re pleased as punch this week to welcome a guest playlist from local trio Fax Holiday. Fresh off a release show at Roggie’s in Brighton last Saturday for its new 10-inch, “Big Fear,” the band won’t play locally again until Jan. 24 at Middle East Upstairs. Still, the members were kind enough to put together a little midweek playlist for us. “These are songwriters and musicians that we feel inspired by, and the (mostly) live performances that capture what we love about them,” says frontman Eric Schermerhorn. “Some are old friends, some are new, others are total strangers, but we hold them dear and hope you find something you like.”

With yesterday’s release of “Big Fear,” the band delivers five carefully composed alt-folk songs that approach slowly and gently, but build into massive acoustic sonicscapes. Lyrically poignant but not overly wrought, Fax Holiday meets punk sensibility with instrumental ease, engaging the listener in a way that’s more curious than forceful. Their fragile approach lends nicely to their musicianship, as well, letting instruments like piano, omnichord, and violin shine. Check out “Trees Down” from “Big Fear,” and then see below for the band’s playlist.

“This might be our most listened to record this year. Amazing singer and really beautiful songwriting. Her songs have so much space and the instrumentation is careful and deliberate. This particular song is one of our favorites off ‘Half Way Home,’ and this version especially captures it in a great way. She has a new record coming out in February on Jagjaguwar.”
“Beat Radio has been around since 2005 and has consistently released some seriously amazing records since then. We found the Long Island-based musician over a decade ago on Myspace and have been fortunate to finally meet and play some shows with him this past year. ‘Hurricanes, XO,’ the first track off the 2013 album entitled ‘Hard Times, GO,’ sounds just as good stripped down in a YouTube video as with a full band on the record. Brian is great at writing honest and intelligent pop songs. Not an easy thing to do. Can’t say enough good things about Beat Radio, check it out.
“The self-proclaimed ‘slop rock’ band from western Mass has been around for quite some time now and their most recent release ‘Calling Out’ really shows how amazing of a band they continue to be. From dueling clean guitars, to the chanting harmonies from singers Emerson [Stevens] and Candace [Clement], the songs are so incredibly catchy that we have a hard time not listening to this record on repeat all day, every day. Not to mention how terribly nice all the members of Bunny’s a Swine really are. Great music made by great people – it’s as simple as that.”
“Adam has been a close friend for a long time, and since he began playing as Radiator King, it has been a pleasure to see him really growing into his own. This video is from a solo tour he and Eric did this fall, at a show in Science Hill, Ky. Adam is more motivated than most and his songwriting is moving in an awesome direction. If you haven’t heard last year’s ‘Launching Day,’ you can do so here.“
Not only did Sean’s band put out one of our favorite full-lengths of 2013, but he also released this song as part of a split seven-inch with Chicago-based My Dad. We’re really excited to see where he takes things in the future, ‘Sad History Month’ brings in some new elements and experimentation that make us hopeful for whatever he’s working on next. You can pick up the seven-inch here.“
“Aly Spaltro, AKA Lady Lamb the Beekeper, is from Portland, Maine. We first saw her open for Sharon Van Etten at Brighton Music hall a few years back, having never heard her before. She walked out on stage and started belting out ‘Up In The Rafters,’ an almost 10-minute a capella [song] – and the entire room fell completely silent. She’s a great songwriter, and one of the most captivating performers around, even when it’s just her and a guitar. Last December when she came through, she borrowed Eric’s guitar for a set, pretty cool! This video is from that show. She has an album out called ‘Ripley Pine’ on BaDaBing Records.”
“Myles Manley is an Irish pop star. Myles Manley is unconventional and unassuming. He’s a genius, tapped into a wavelength that the rest of us don’t know about. He might be none of these things, he might be all of them, I don’t know. We first met him at a show in Brooklyn about a year ago. Since then, we’ve played together a few times; he lives in Dublin but travels to New York for a few weeks here and there. He’s got an honest and humble outlook on things, yet artistically is totally unpredictable. This music video was the first we’d ever seen of his, I’m sure you’ll be as interested by it as we were.”
“Truthfully, we could have done this whole playlist about PJ Harvey 10 times over. This song is off her seventh album ‘White Chalk.’ PJ Harvey has covered so much ground in her career, and has done it so well, I can’t think of anyone to compare it to really. She’s got a great talent for writing songs and capturing the right moods. It’s something we’re really drawn to and are continually inspired and amazed by.”
“Pile is in the studio recording this song right now! This video was recorded live at the Exploding in Sound CMJ showcase in Brooklyn in October. They are the hardest working band we know, and as you can see in the video they really put everything they have into their music. Great friends and great people. Can’t wait for the new stuff.”
“Why is this song on our playlist? For one simple reason — it is without a doubt one of the best songs ever. You may start by liking this song ironically and then quickly realize it’s just a fantastic song. Really puts you in a good mood no matter when you listen to it. From the catchy melody to the politically incorrect lyrics to Ray Dorset’s gap teeth, we love it.”