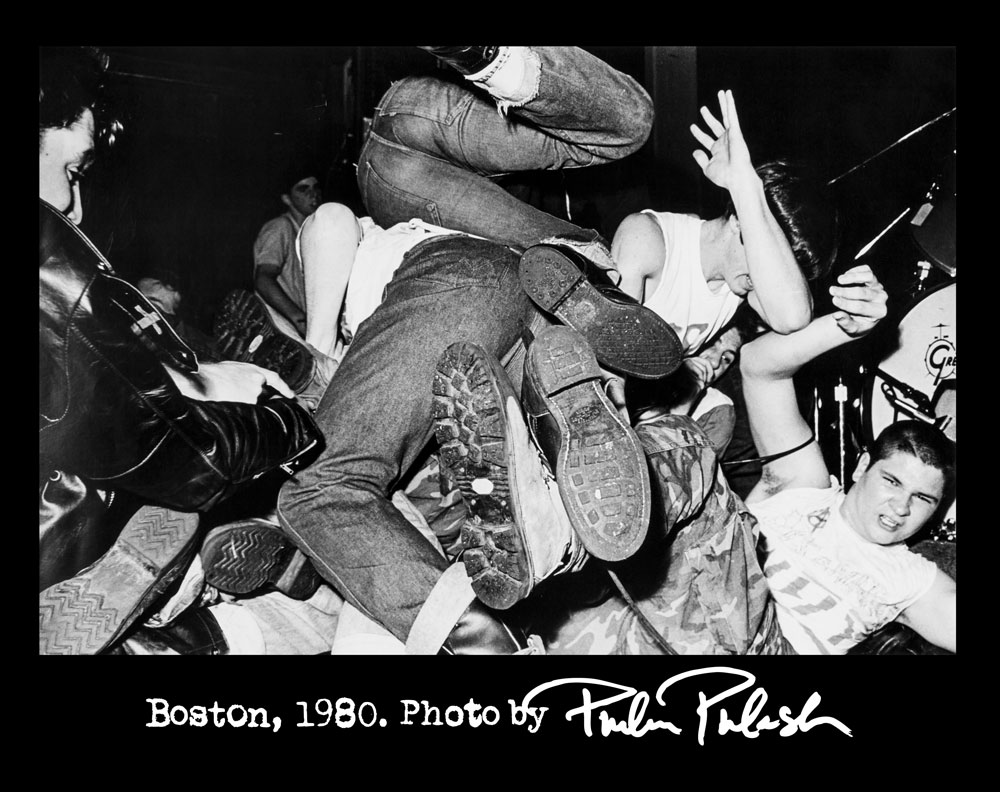 Representing your favorite musicians in t-shirt form is nothing new, and Boston in particular has always had a proud sense of its musical history. But Good Roads Goods, a new line of apparel from longtime Boston music fixture Brian Coleman, takes iconic photographic moments from throughout music history and immortalizes them on fabric. His latest design is a well-known image from the Boston hardcore scene of 1980. Coleman, who has been around in Boston for the past 25 years doing PR work in the music scene (jazz, rock) and writing a couple hip-hop books, “Rakim Told Me” and “Check the Technique,” spoke to us about his line.

Q. What’s your background in fashion and how do you blend it with photography and music?

A. My fashion background is questionable at best, but I do wear clothes almost every day and I think I know what sucks and what doesn’t. I have also always been a huge fan of photography that captures moments. Usually live musical moments, but it doesn’t have to be. I would point to photographers like Glen E. Friedman and Edward Colver out in Cali in that regard.

Q. What made you want to start an apparel line?

A. I see a lot of apparel brands out there, especially in what is considered “street wear,” and I never want to support any of them. They don’t stand for anything. They also charge too much.

Q. Are they all music-focused designs?

A. I would say that many of the first designs I have done, which use licensed photographs, are music-focused, just because music is my No. 1 passion. But not all of them. I’m proud of my Roller Derby shirt, a photo by Joe Vitti from 1974 that I found in a book.

Q. Why did you choose this image for Boston? Where and when is it from?

A. Philin Phlash has always been one of my favorite music photographers, although he does a lot more than just music, and I have always known about his history in Boston, documenting the music scene in the ‘80s. But most younger people in the scene today don’t know who he is, which is a shame. So, besides the fact that this image – taken in 1980 at a long-defunct club in Allston called Streets – is iconic for Bostonians older than 40, I think it represents the early hardcore days in Boston, groups like SSD, Gang Green, Jerry’s Kids, and all the Taang! Records people. To be clear, I wasn’t part of that scene, I was 10 years old in 1980, I didn’t start going to shows in Boston until around 1988, in the Slapshot era. But I am hoping to do more with Phil and other local photographers, so I wanted to start with some of his earlier work, before I delved later into the ‘80s. I don’t think anyone has ever done a shirt with this image, either.

Q. How does the charity component work? Is it a charity in each specific city you profile?

A. I talk to each photographer and we decide on a charity, usually one they choose. Or if I choose it, then they approve it. It’s something that they and we believe in and also hopefully has something to do with the photo, at least the location of where the photo was taken. The amount of the donation depends on how many shirts are sold. It’s not going to change the world, but it’s something that I think is important to do. I only sell direct, at least for now, on my website, so that means more money I can donate.

Q. Who are these shirts for?

A. I guess first and foremost I make shirts that I would wear, which is really what anyone should do: Be your own customer. That way it will start out being authentic. But I am hoping that the photographs I license will represent things bigger than what is seen in the photograph itself. That’s why I always include a Q&A with the photographer on the product page, to give background about what was happening when that photo was taken and that kind of thing. I also try and choose images that I consider to be timeless and engaging – they could be taken today or could be from 40 years ago and people would still be drawn to them. So realistically, 16-year-old kids who don’t care about music or art aren’t my audience. But I am hoping that intelligent people who want to wear something that means more than just a stupid logo or ironic modification of a Mickey Mouse image would be down, no matter what their age. I would buy the stuff I’m making when I was 16 or 18, if it was out then, and I would buy it now. And if people aren’t into Good Road Goods, there are plenty of Crooks & Castles, Undrcrwn, and Young & Reckless designs that will suit them nicely when they are shopping at Pac Sun.

Q. You mentioned you hate street wear. Why?

A. Basically, I think that so-called “street wear” has been too stupid and selfish for too long. People deserve something better. I’m not going to bankrupt Billionaire Boys Club or Stussy — they don’t have much to worry about. But I think people are smarter than some of these brands give them credit for. And if they have a choice between a vacuous brand rehashing stuff that another brand did 15 years ago and a company like Good Road Goods that treats them like they are intelligent, then some of them might give us a shot.

Enter to win tickets to see Trio Da Kali at The Villa Victoria Center of the Arts (Newton, MA) on April 10th. END_OF_DOCUMENT_TOKEN_TO_BE_REPLACED

END_OF_DOCUMENT_TOKEN_TO_BE_REPLACED

Enter to win tickets to Rhye at The Paradise on February 28th. END_OF_DOCUMENT_TOKEN_TO_BE_REPLACED

Her new album has been pushed back, but we have Kimbra’s new single for you. END_OF_DOCUMENT_TOKEN_TO_BE_REPLACED

The folk duo returns with a new record this week. END_OF_DOCUMENT_TOKEN_TO_BE_REPLACED

Now that we’re done looking back at 2017, let’s look ahead at 2018. END_OF_DOCUMENT_TOKEN_TO_BE_REPLACED

Our first Song of the Week for 2018. END_OF_DOCUMENT_TOKEN_TO_BE_REPLACED

In a year when so many things were off, the music was right on. END_OF_DOCUMENT_TOKEN_TO_BE_REPLACED