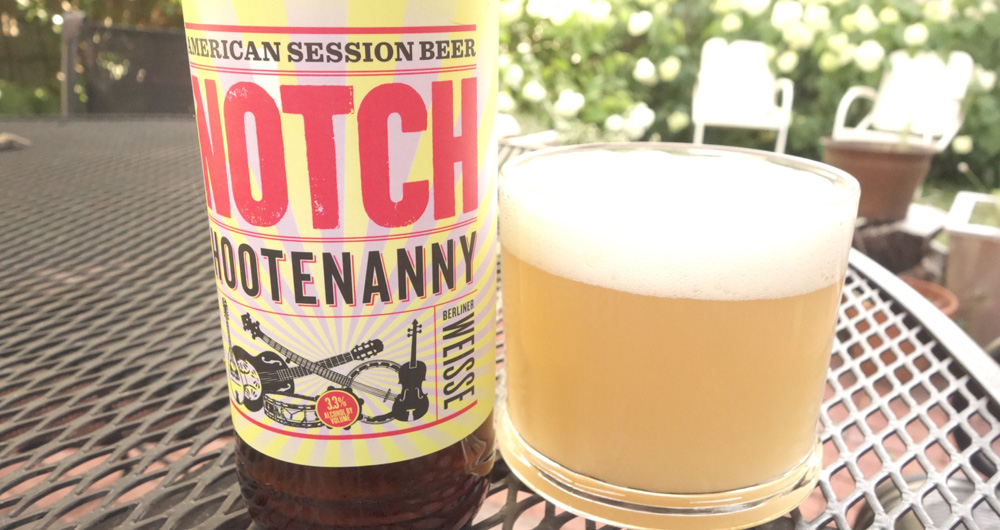 Anyone looking to celebrate Germany’s World Cup win a few days late this week could do worse than downing a chalice or two of local Berliner Weisse, the refreshingly drinkable German-style wheat beer.

In America, the style has long taken a backseat to summer ales and, at least this summer, to an influx of shandies and radlers, but the underrated style can infinitely reward beer drinkers seeking sweet relief from these nagging 85-degree days.

Boston-area beer fans can imbibe with two takes on the slightly tart and sometimes sour, centuries-old style this week.

First up is Notch Brewing’s version, Hootenanny (3.3% ABV). The beer, a “straight up rendition of a Berliner,” is slated for release tonight at Brick and Mortar in Central Sq.

Chris Lohring, Notch Brewing’s one-man-wrecking-crew, has long wanted to brew a Berliner Weisse, but it wasn’t until this year that the cards finally fell into place.

“Just the fact that Ipswich Brewing’s head brewer Dan Lipke, even let me brew a Berliner in their facility was a miracle,” Lohring notes on his blog.

While the style is widely regarded as a tricky beer to brew, the toughest part of the project was actually navigating the brewing system’s setup.

Lohring has been brewing out of Mercury Brewing in Ipswich for years, but it wasn’t until this summer that the brewery, currently operating out of two brewhouses – Mercury and the new Ipswich, had enough space to make Hootenanny possible.

After a few fermentation tests with lactobacillus, the bacteria that lends the beer its tart flavor, Lohring gave the beer a spin on Ipswich’s newest system. Hootenanny wound up being just the third brew on the setup.

30 barrels of the beer was brewed, split up and will be distributed in 22 oz. bottles and to draft accounts this week.

While fans of Notch’s canned offerings like its Session Pils and Left of the Dial IPA are no doubt eager at the concept of canned Hootenanny, they shouldn’t hold their breath. With the minimum purchase of cans so high – and the yield of this beer so low, Lohring doesn’t foresee Hootenanny being a practical canning option anytime soon.

Brewing the beer was an arduous, two-day, two-step process; the equivalent of four brewing shifts. Lohring isolated the lacto in the kettle, boiled the beer to kill the bugs before fermenting it with a German ale yeast.

“With any new beer, technique, there’s a lot of theory, and then the actual results. Happy to say those weren’t too far from each other,” Lohring said of Hootenanny.

Mixologists at Brick and Mortar will craft cocktails with the beer tonight and sling pours of the beer as is or accompanied “mit Schuss,” or, “with a shot,” of either two homemade syrups, raspberry and blueberry designed to cut the sour.

And for those wondering – yes there will be straws.

“Berliners with syrups must be consumed with a straw (if only for aesthetic purposes),” Lohring jokingly mandated.

Jack’s Abby ‘s interpretation of the style, like most of their beers, is a completely different take.

The Framingham all-lager brewery is set to release its Berliner Lager (3.5% ABV), a Berliner Weisse-style beer, Tuesday at State Park in Kendall Sq.

The beer has all the sourness and underwent the same lactic acid fermentation associated with Berliner Weisses – Jack’s Abby’s version just has none of the ale yeast.

The beer follows up Berliner Braun, a sour beer that brewery co-owner Jack Hendler and company brewed over the winter. The beer – which they later let age in barrels with wild cherries – gave them a lot of insight to the sour beer making process.

For the Berliner, the brewery used a sour mash and ran it off into a kettle, where bacteria and wild yeasts did their thing. From there they let the beer ferment for 24 hours, boiled it to kill the bugs, and finished it off with lager yeast before it was cold fermented for about two weeks.

While Berliner Weiss style beers can be pretty labor intensive to make, they’re usually low in alcohol, so they don’t take long to ferment.

“It’s extremely dicey and it really pushes the production facility to brew it,” Hendler said when describing the Berliner’s brewing process, adding that it tied up the brew house for 24 hours.

Jack’s Abby normally brews from Monday to Friday but this particular beer spilled over into the weekend.

“We had to brew this Thursday through Sunday, and continuously monitor the fermentation in the kettle to make sure we were hitting our target readings,” Hendler said.

100 barrels of Berliner Lager were produced but not all of it is destined for release this week. The beer was put into some second-use Framinghammer barrels last week where it will see secondary fermentation, and some yet to be determined fruit, for a release come fall at the brewery.

The Berliner barrels will join 50 other wine barrels the brewery has been aging sour beers in going on nine months now. The beers, a golden and an amber, will be released this fall after the brewery plays around with them by adding fruit and spices and maybe dry-hopping a barrel or two.

At State Park, like they’re doing at Brick and Mortar, the Berliner will be available as it is or accented with raspberry or woodruff syrups for those who want to tone down the sour.

“Your first sip is ‘Holy cow, this is sour!’ but by sip three you hardly notice it at all,” Hendler said about the beer’s tartness.

Enter to win a pair of tickets to attend The Hess Collection Seminar and Dinner as part of Boston Wine Festival 2018 at the Boston Harbor Hotel on Wednesday, March 14th. END_OF_DOCUMENT_TOKEN_TO_BE_REPLACED

This year, the festival is welcoming more female wine producers than ever before, making up 20% of all winemakers that will be at the festival. END_OF_DOCUMENT_TOKEN_TO_BE_REPLACED

The holidays are here, so raise a glass. END_OF_DOCUMENT_TOKEN_TO_BE_REPLACED

‘Tis the season to mix a nice, stiff drink. END_OF_DOCUMENT_TOKEN_TO_BE_REPLACED

Warm up with Tito’s on your sweater and Tito’s in your glass. END_OF_DOCUMENT_TOKEN_TO_BE_REPLACED

There’s a ton going on at Idle Hands in Malden this spring. Dan McDonnell and Josh Deering joined me in studio to talk about Maifest, what’s new in the Taproom, and their collaboration with The Black Ale Project. Oh, and don’t miss Idle Hands at BeerAdvocate’s Microbrew Invitational next month! END_OF_DOCUMENT_TOKEN_TO_BE_REPLACED

Giovanna Guzman is the marketing coordinator at Kings Bowl, who you can visit in the Back Bay, Burlington, Lynnfield, Dedham, and soon in the Seaport. We talked beverages, naturally, seeing as it’s Thirsty Thursday. And we sampled sangria. And it was soooo good. END_OF_DOCUMENT_TOKEN_TO_BE_REPLACED

These five words might change your life: Farmer Willie’s Alcoholic Ginger Beer. Co-founders Nico Enriquez and Max Easton were in studio with me this morning. Nine-packs and kegs of Ginger Session coming next week! END_OF_DOCUMENT_TOKEN_TO_BE_REPLACED