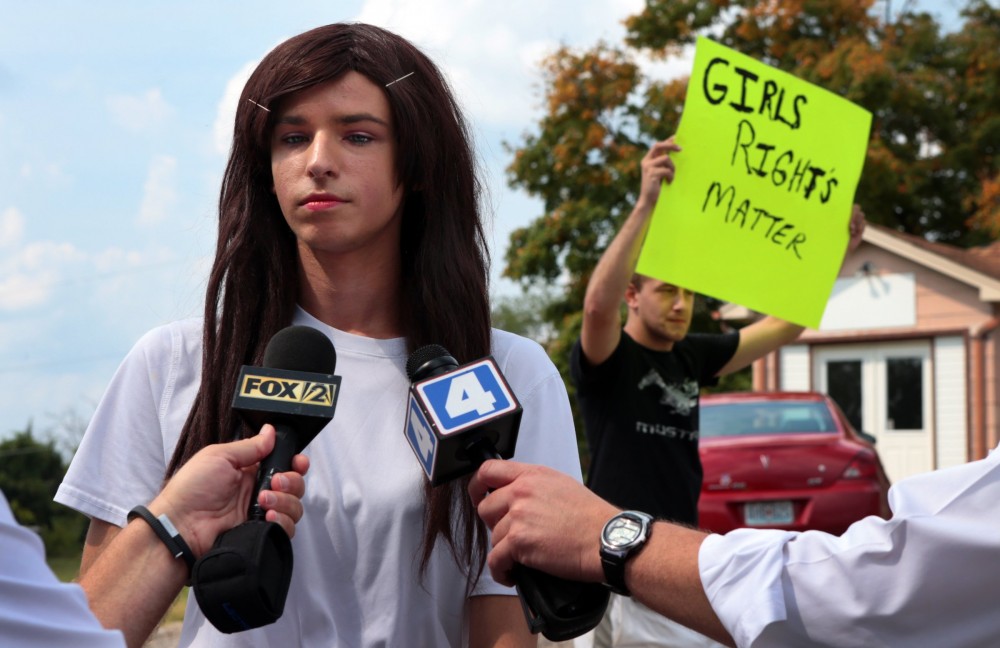 He was part of a 150-person walkout organized to object to a transgender student using the girl’s locker room, according to the Washington Post.

That protest poster is ironic because the student in question is a girl: Seventeen-year-old Lila Perry is a trans teen from Hillboro, Missouri, who has publicly identified as a girl since she was 13 years old. 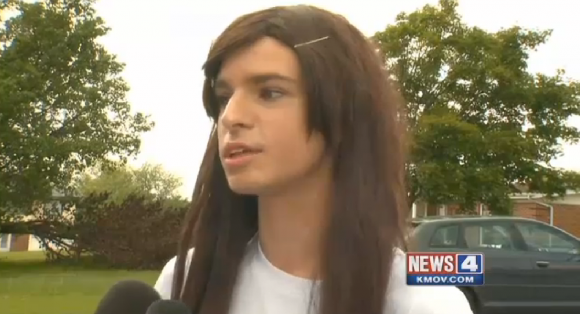 But many protestors reportedly believe that, because Perry was designated male at birth, she should not be allowed to use girls’ facilities.

“The girls have rights, and they shouldn’t have to share a bathroom with a boy,” Tammy Sorden, who has a son at Hillsboro, told the St. Louis Post-Dispatch.

“Lila has not went through any procedure to become female,” Beele told Fox2Now.

Beele said that, because of this, Perry’s use of the girl’s locker room is “offensive.” “Putting on a dress and putting on a wig is not transgender to me,” she told Fox2Now.

Perry told KMOV St. Louis that she believes the outcry against her use of the girls’ facilities stems from deep issues of ignorance and bigotry.

“It wasn’t too long ago white people were saying, ‘I don’t feel comfortable sharing a bathroom with a black person,'” Perry told Fox2Now. “And history repeats itself.”

Up until this school year, Perry had been using the gender-neutral staff bathroom at school. But she said that it didn’t feel right to her.

“Using the staff bathroom, I felt segregated off,” Perry told St. Louis Today. “I didn’t like that. I wanted to…blend in with all the other girls.”

Perry, who was locked in the principal’s office during the protest, has dropped out of the P.E. class that led her to use the locker room in the first place. She told KMOV St. Louis she doesn’t feel safe.

This is not the first time that Hillsboro residents have gathered to protest Lila’s use of girls’ bathrooms, either. In a school board meeting held August 27, parents of some Hillsboro students banded together with a conservative advocacy group to draft a district-wide policy on transgender students’ use of certain school facilities, according to St. Louis Today. The new policy, which St. Louis Today reports will likely be upheld in court, would force students to use bathrooms and locker rooms associated with the gender they were assigned at birth.

While many opposed Perry’s use of girls’ facilities, about 40 Hillsboro students stood in support of her Monday.

“She is such a good person,” 16-year-old Skyla Thompson, who calls Perry her best friend, told St. Louis Today. “They are just judging her on the outside.”

“She is a human and she has human rights as everyone else,” fellow student Hayley Reezes told Fox2Now.

When it comes down to it, Perry said, she’s just asking to use the bathroom she feels most comfortable in and she’s deserving of the rights she’s seeking.