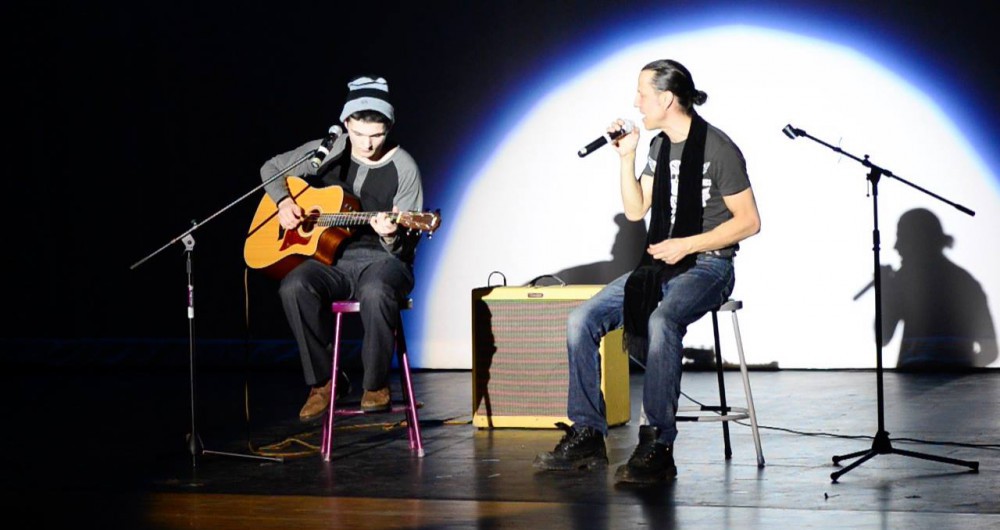 Gary Cherone was obviously the greatest lead vocalist that Van Halen ever had, but the singer made his biggest waves as Extreme’s frontman. Although most teenagers these days have less of a clue as to who Extreme is, that is not the case of Malden High student Nick Hames.

Hames was performing at his school’s 75th Annual Junior Varieties Show last week when local rocker Cherone made a surprise appearance on stage.

“Gary is really close friends with one of my administrative assistants,” Principal Dana Brown said. “He is a Malden High grad.”

According to Brown, Hames had been rehearsing the song “More Than Words” — Extreme’s early ’90s hit — and Brown’s assistant recorded it and sent the video to Cherone who then “jumped at the opportunity” to come on board.

“30 seconds went by and I saw someone walk towards the stage and I thought ‘what’s this guy doing?'” Hames said. “I didn’t know if he was going to tackle me. I didn’t know what’s going on. I then see a skull t-shirt and I’m like ‘no way.’ I was in awe. That was one of the greatest things ever.”

Hames said his dad is how he was introduced to classic rock, as he would often blast music from Van Halen and Led Zeppelin.

“Technically, I didn’t really grow up with these guys,” Hames added. “But I definitely grew up listening to these guys.”

It is humbling to see the Malden native return to his roots, but the cherry on top was that the surprise came on Hame’s birthday. The now 18-year-old student said it was such an honor.

“Someone had told me, and I didn’t hear this straight from him, but someone had said that was one of the best versions of ‘More Than Words’ he’s ever done he said,” Hames said. “That touched me. It was so meaningful, even though I messed up a few times.”

Good luck to his parents trying to get him a better present.

Enter to win a pair of tickets to attend The Hess Collection Seminar and Dinner as part of Boston Wine Festival 2018 at the Boston Harbor Hotel on Wednesday, March 14th. END_OF_DOCUMENT_TOKEN_TO_BE_REPLACED

We ate vegan blueberry cake and it was amazing. END_OF_DOCUMENT_TOKEN_TO_BE_REPLACED

Dan Croll is a great musician and an even better person. END_OF_DOCUMENT_TOKEN_TO_BE_REPLACED

We kicked off the weekend with a visit from Sasha Purpura, Executive Director of Food For Free. Sasha was back to promote next month’s Craft for a Cause event, a craft beer festival celebrating the Central Square Cultural District. END_OF_DOCUMENT_TOKEN_TO_BE_REPLACED

Summer is the hungriest time of the year. Millions of kids rely on school meals, but in summer, the meals disappear. HGTV’s Taniya Nayak was in studio this morning to talk about Taste of the Nation this coming Tuesday, June 6, which benefits Share Our Strength’s #NoKidHungry initiative. Click here to get your tickets. END_OF_DOCUMENT_TOKEN_TO_BE_REPLACED

Community Servings provides nutritious meals to individuals and families living with a variety of illnesses. Stephanie Carrigg was in studio this morning to talk about this year’s Meals4Moms program, where your contribution not only helps feed moms in need, but nets you some great goodies for a mom in your life. END_OF_DOCUMENT_TOKEN_TO_BE_REPLACED

Continuing our month-long series spotlighting videos we hope will inspire you think. END_OF_DOCUMENT_TOKEN_TO_BE_REPLACED

The first in a month-long series focusing on new songs that go a little deeper. END_OF_DOCUMENT_TOKEN_TO_BE_REPLACED