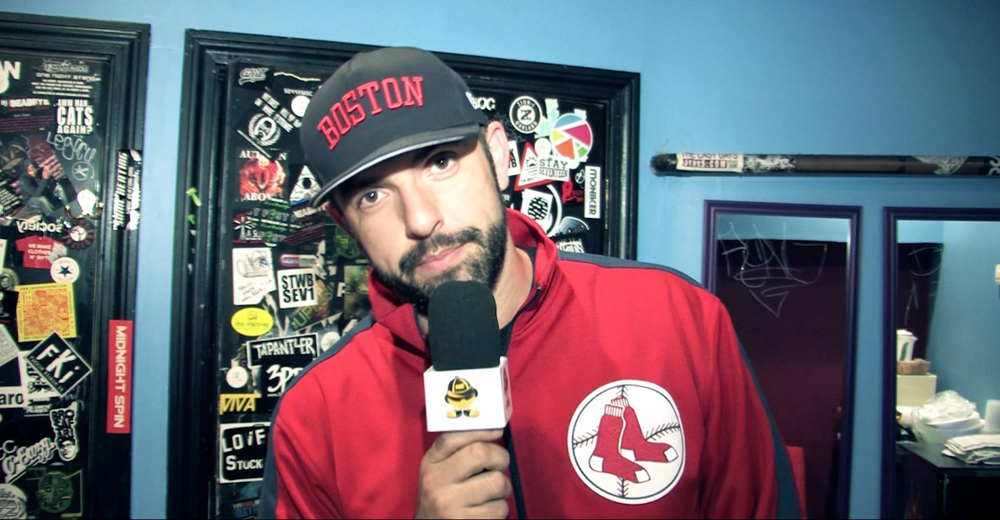 There wasn’t a more fitting location to interview Ned “Leedz” Wellbery than the Middle East. The historic club has served as the backdrop for some of the most groundbreaking hip hop shows in Boston for the last decade. Wellbery, who prides himself on his resilience as much as he does his keen business acumen, has adjusted well to being the epicenter of Leedz Edutainment (his independent promotion company). As expected, it was an adjustment that came with a palpable price tag: his personal life.

“I work 25 hours a day, 8 days a week. It definitely has taken its toll on me—but I’m more balanced these days.”

Almost immediately, the topic evolves into his controversial reputation. Over the years, the eminence that Wellbery has garnered is, at best, unflattering. At worst, his methods for making local hip hop profitable were downright tyrannical. But he manages to keep an honest and mature outlook on the subject. “[My reputation] is better now. In the beginning, I quickly realized that being a promoter means that you can’t always be likeable—someone has to enforce the rules.”

His inherently stern demeanor throughout our conversation peaks at this point. “I’ve been put through a lot of tests. There are limited outlets in this city to get on, so some see this as a free for all. It becomes very competitive, and people get very critical.” The notion of Boston having a transient music scene is also applicable to this particular genre. “Boston is in a constant state of development,” Wellbery claims. “It’s still finding its way. People want it to be more than what it actually is—and they complain about it. The truth is, you can’t see shows like these in other cities, except for places like New York and LA. Things that work well here might not work anywhere else—this city has a uniqueness to it.”

Despite the intense discussion at hand, he lightens up to reminisce over a few of Leedz Edutainment’s most memorable performances. “A$AP Rocky, Kendrick Lamar, Schoolboy Q, Immortal Technique. But [the list] also includes the people I grew up listening to—like the Geto Boys, DJ Premier, and Bone Thugz.” The Lox, who are headlining his 10th anniversary affair, will most likely be added to this indelible list of favorites. But when they roll through the Middle East on April 26th, it won’t just be another legendary rap group leaving their mark on one of Boston’s favorite music venues—it’ll be yet another declaration of Wellbery’s undisputed staying power. He has no plans of relinquishing his reign for the foreseeable future.

“I just want to keep doing the biggest hip hop shows possible. I could see myself expanding out of Boston,” he prophesizes. “But I’m not leaving anytime soon—this city is my home.”

Perry Eaton writes for Boston.com. Perry Eaton talks on the radio with me from time to time. Today, he talked to me about what he’s been listening to and some upcoming shows and festivals worth checking out. Click here to read more. END_OF_DOCUMENT_TOKEN_TO_BE_REPLACED

In some ways, Palehound has always had a home in Boston. END_OF_DOCUMENT_TOKEN_TO_BE_REPLACED

Kal Marks is the kind of band that sneaks up on you. Whether you’re experiencing them at some basement show in Allston, or in an opening set for Pile at Great Scott, you may not see them coming, but they’ll immediately click. The combination of heavy sludgy riffs and lead singer Carl Shane’s unique crooning bowls you over. It’s dark and it’s compelling, but most importantly, it’s really earnest. END_OF_DOCUMENT_TOKEN_TO_BE_REPLACED

It’s not very often that some of the most talented performers in Boston are set to grace the same stage in a single night. This Sunday marks the 1 year anniversary of Mind Spray, a local hip-hop open mic and showcase series devised by promotion and booking company The Brain Trust. END_OF_DOCUMENT_TOKEN_TO_BE_REPLACED

There’s been a lot written about Street Dogs evicting a group of neo-Nazis from the pit at their House of Blues, Anaheim show on St. Patrick’s Day. You don’t need to read any of it. Just listen to front man Mike McColgan tell the story. He talks about joining his old band, Dropkick Murphys, on stage in Boston last week, too. END_OF_DOCUMENT_TOKEN_TO_BE_REPLACED

It’s not her best. END_OF_DOCUMENT_TOKEN_TO_BE_REPLACED

When in Nashville, do as the locals do. Since relocating to Tennessee a few months ago, this seems to have been Steven Tyler of Aerosmith’s approach after announcing in an October Twitter Q&A session that he intended to record a country album, an endeavor he’s well in the process of completing. END_OF_DOCUMENT_TOKEN_TO_BE_REPLACED

“I’m Shipping Up To Boston” just turned ten years old. Boston.com’s Matt Juul put this piece together on the history and significance of the Dropkick Murphys song, then joined me in studio to talk about it. END_OF_DOCUMENT_TOKEN_TO_BE_REPLACED

Boston is a city known for it’s Irish heritage, and it’s celebration of it. Two main traditions have held strong in Boston: the St. Patrick’s Day Breakfast and subsequent Parade. But I argue there is a third now: seeing the Dropkick Murphys at the House of Blues during their multi-night March Residency. END_OF_DOCUMENT_TOKEN_TO_BE_REPLACED

Sure, you might see a punk show on Monday and a chillwave band on Thursday and so on, but usually you favor one sound over another because you’re a busy bee and time is honey. It’s been the same for years, and the Prefab Messiahs can vouch. END_OF_DOCUMENT_TOKEN_TO_BE_REPLACED