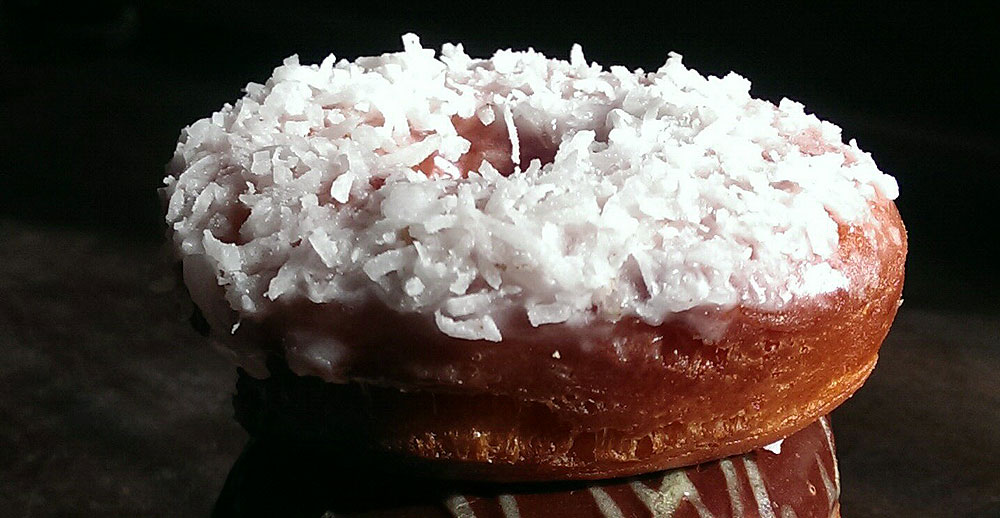 A word of advice if you haven’t yet made it down to the South End to try a doughnut from “Top Chef” contestant Stephanie Cmar’s new pop-up shop: Set your alarm.

Bundling up a bit wouldn’t hurt either.

The pop-up, Stacked Donuts, has taken up residency in Barbara Lynch’s cozy Tremont Street restaurant The Butcher Shop over the last two weekends and while plenty of Bostonians may be content sleeping in on Saturdays and Sundays, rabid fans of Cmar and doughnuts alike have braved the sub-freezing temperatures to wait in line for a few of the hot, limited fried confections.

While a colorful chalkboard outside the South End shop claims the doughnuts are on sale from 9 a.m. to 11 a.m., we found out this past weekend they really only last from 9 a.m. to 10 a.m., if that.

Previously a sous chef at Beacon Hill’s illustrious No. 9 Park, Cmar, 28, won her second to last elimination challenge on an episode of “Top Chef” that aired in January but was hastily shown the door in the following episode.

In the time since, it’s safe to say the doughnut business has treated Cmar well. The Johnson & Wales-trained chef was forced to drastically up the amount of doughnuts she’s had to make since debuting Stacked Donuts on Feb. 22 and last weekend, she sold more than 500 doughnuts in less than an hour each day.

Stacked Donuts returns to the Butcher Shop one last time this weekend and if you’re considering waking up early (you should!) here’s a rough idea of what to expect:

Go early and plan on waiting outside for around 30 minutes once you get there. Bring gloves, or at least a coffee to keep your hands warm and take solace that it’s the South End and there’s plenty of people watching dog watching to keep you busy while you wait.

When it’s finally time to enter, first timers may think it’s a bizarre scene. The space of course doubles as an actual butcher shop and restaurant during normal business hours. Yet, it’s still surprising to see racks of lamb, charcuterie, porchetta, and ropes of sausage links decorating the interior of a refrigerator in the distance. Once you actually make your way through the crowd – and the line moves faster once you’re inside – the aroma of freshly-baked doughnuts begins to fill the air. Near the front of the line is a towering platter of complimentary doughnut-holes, as if the customer needs any validation before purchasing one. At the line’s end is Cmar, sporting a resilient smile, her apron absolutely bedazzled in bright and cartoonish doughnuts.

Cmar, who stuffs the doughnuts into non-descript brown paper bags as soon as you order them, has experimented with five different flavors over the last two weeks. Patrons were treated to blood orange-glazed and Bavarian cream-filled doughnuts the first weekend while honey, mint chocolate, and coconut doughnuts found their way onto the baking sheets this past weekend.

Cmar has previously mentioned future flavors could include key lime, nutella, and red velvet to name a very short few. I’d be lying if I said I wasn’t personally looking forward to trying the Campari Bavarian version with celery and mascarpone she posted on her Instagram last month.

The doughnuts, $3 apiece, with a limit of six, are classic yeast doughnuts, fluffy and not too unwieldy — they’re just the right size, really. When we tried them on Saturday we probably could’ve eaten six of the coconut doughnuts alone. Each one came coated with a bountiful layer of dried coconut. Elsewhere the honey doughnut was simple, chewy, and tasty and while the mint chocolate doughnut probably could’ve used a little more mint flavoring, it still did the trick.

While Cmar is clearly enjoying the pop-up (scanning the room it’s hard to spot her without a smile on her face), a sign on the tip jar near the front of the line makes Cmar’s goal clear: “HELP OUT STEPH OPEN A BRICK & MORTAR SHOP!”

And that’s likely in the cards, at some point down the line at least.

Cmar had previously said that she was considering stepping away from fine dining so it shouldn’t have come as a surprise to anyone when she announced she was leaving her job as a Sous Chef at Lynch’s No. 9 Park just two weeks ago.

Meanwhile, rumors of Cmar opening a doughnut shop began to spread as far back as October 2012 when she told Boston Magazine that she had dreams of opening a shop in the vein of New York City’s Doughnut Plant or Philadephia’s Federal Doughnuts.

While New Englanders have been critical of non-Dunkin variety doughnuts in the past, Cmar’s shop could be popping up at just the right time.

Business has been very brisk for another small batch doughnut shop, Somerville’s Union Square Donuts. The tiny gourmet shop located across from Bloc 11 outside Union Square has been selling out of doughnuts like brown butter hazelnut crunch and salted bourbon caramel early and often over the last 10 months.

If demand keeps up, it could only be a matter of time before Cmar lands that brick-and-mortar, a move that could leave the residents of Boston as lucky benefactors riding a sugar high.

Enter to win a pair of tickets to attend The Hess Collection Seminar and Dinner as part of Boston Wine Festival 2018 at the Boston Harbor Hotel on Wednesday, March 14th. END_OF_DOCUMENT_TOKEN_TO_BE_REPLACED

It’s been a crazy week with all the snow. We need a drink. END_OF_DOCUMENT_TOKEN_TO_BE_REPLACED

Amazing sandwiches for a good cause? Make a bunch for us! END_OF_DOCUMENT_TOKEN_TO_BE_REPLACED

And they came to our studios, too! END_OF_DOCUMENT_TOKEN_TO_BE_REPLACED

It’s almost time send off 2017 and welcome in 2018, and we have some ideas about how you can do precisely that. END_OF_DOCUMENT_TOKEN_TO_BE_REPLACED

The pics alone will make you want to make a reservation. END_OF_DOCUMENT_TOKEN_TO_BE_REPLACED

Some people love cooking for the holidays. Others, not so much. END_OF_DOCUMENT_TOKEN_TO_BE_REPLACED

There’s so many to keep track of, you might have missed this one. END_OF_DOCUMENT_TOKEN_TO_BE_REPLACED

Looking to add a little more “cheers” to your holiday cheer? Pabu can help you. END_OF_DOCUMENT_TOKEN_TO_BE_REPLACED