Kids and parents, smile and cheer — for a new book from Dr. Seuss will soon be here!

They found his new book in a box. They didn’t find it with a fox.

On July 28, Random House will release a new book from Theodor Geisel, better known as beloved children’s author Dr. Seuss, who passed away in 1991 at the age of 87.

That book, titled What Pet Should I Get?, is a big event for Random House, which is planning an initial run of one million copies.

Here’s a summary of the book from Random House:

“This never-ever-before-seen picture book by Dr. Seuss about making up one’s mind is the literary equivalent of buried treasure! What happens when a brother and sister visit a pet store to pick a pet? Naturally, they can’t choose just one! The tale captures a classic childhood moment—choosing a pet—and uses it to illuminate a life lesson: that it is hard to make up your mind, but sometimes you just have to do it!”

Upon Geisel’s passing, his widow Nicole Geisel packed away Theodor’s drawings in a box. But in February, Random House announced that Nicole and Seuss’s longtime assistant Claudia Prescott had rediscovered a box of unfinished projects, including what became What Pet Should I Get?

Finding a trove of new Seussian material wasn’t a shock, according to Prescott.

“Ted always worked on multiple projects and started new things all the time—he was constantly drawing and coming up with ideas for new stories,” Prescott said in a statement by Random House in February.

So grab your kids and take the car—a bookstore can’t be very far. But if you don’t have any time, the book will be for sale online. 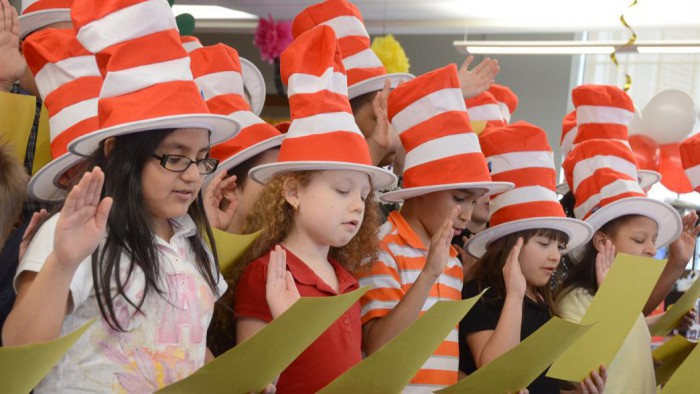 My first Field Trip (of hopefully many) was over half-a-decade in the making. END_OF_DOCUMENT_TOKEN_TO_BE_REPLACED

Melanie Gillespie is an author and the founder of Mel O’Drama School of Acting in Milton. She was in studio this morning to talk about her latest book Darlene and the Drama Queen and how acting can help kids to develop confidence. END_OF_DOCUMENT_TOKEN_TO_BE_REPLACED

Boston Author Lauren K. Stein says her new book ‘Fresh Made Simple‘ was inspired by cooking in the kitchen with her daughter Abigail. The book isn’t just for kids, though. Listen as she describes the book and as we sample some of the recipes. END_OF_DOCUMENT_TOKEN_TO_BE_REPLACED

A scenic train ride through wine country Saturday turned sour for members of a local book club; they were kicked off the Napa Valley Wine Train for allegedly laughing too loudly. END_OF_DOCUMENT_TOKEN_TO_BE_REPLACED

END_OF_DOCUMENT_TOKEN_TO_BE_REPLACED

Avi Shemtov is the chef/owner behind the popular Chubby Chickpea food truck, which serves a fusion of Mediterranean and American cuisine. His new book, “The Single Guy Cookbook: How to Cook Comfort Food Favorites Faster, Easier and Cheaper Than Going Out,” is out now. We talked about it and sampled some dishes! END_OF_DOCUMENT_TOKEN_TO_BE_REPLACED