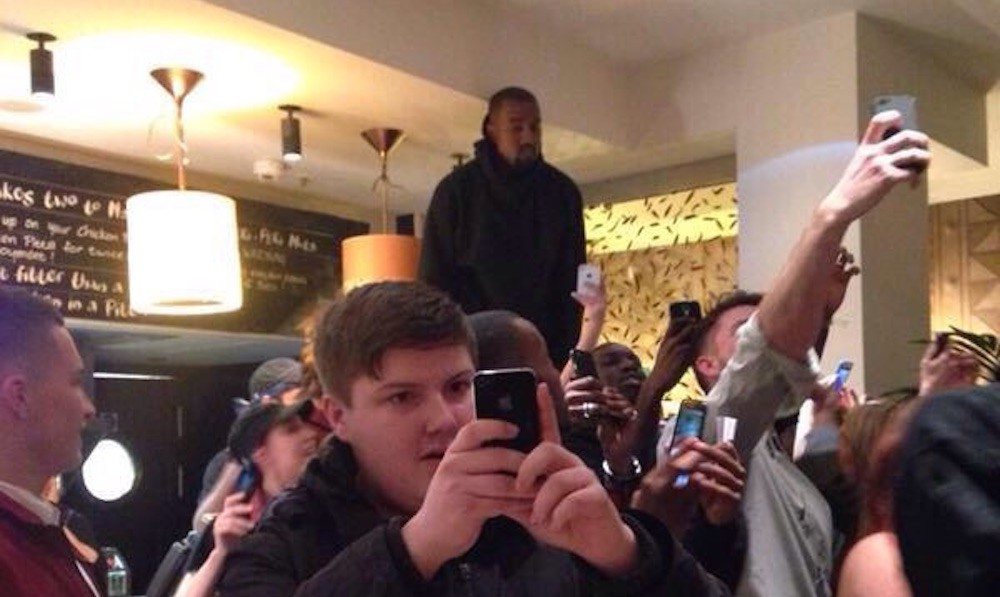 Kanye West stopped into international fast-food chicken chain Nando’s before debuting a new song at the Brit Awards yesterday. But based on the reaction of the crowd, you’d think Barack Obama was playing one-on-one with David Cameron on the other side of the restaurant.

Why did the excited crowd turn their back on Kanye? Not because they had beef with him, or thought his comments about Beck’s artistry were out of line, but because they all wanted to take a selfie. 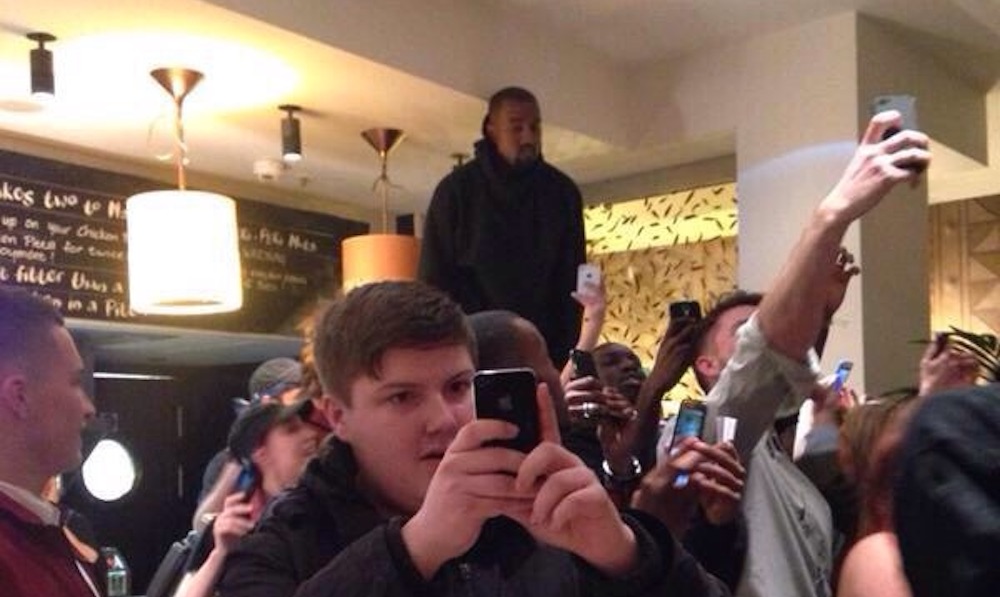 Out of the 10 visible phones in this photo (can you spot them all?!?), I count eight that are pointed away from West, one that’s pointed toward him, and one that’s in transition one way or the other.

Even the girl taking a video of West later picked up by The Mirror can’t resist popping her face in for a second at the end.

On the one hand, it’s a little sad we’ve gotten to a point where people think that a photo or video of something cool isn’t complete with putting their own face in it. Aside from almost always making the photo worse (Wow, that out-of-focus photo of your face with the Grand Canyon in the background sure is swell!), it suggests that your importance or photo-worthiness is equal to that of your drive-by-selfie’s subject — something a man with the self-regard of Kanye West would take issue with. (As would the Grand Canyon, if it could talk.)

On the other hand, in the age of social media, people tend to share photos and videos wantonly without any concern for its source. Professional photographers have been laid off by the hundreds, and illustrators frequently have their work stolen and shared on money-making sites without their permission. A selfie is a living, breathing watermark, an assurance that your contribution to the ebb and flow of Internet content won’t go unnoticed, even if it’s something as mundane as spotting a celebrity in a restaurant.

Kanye, to his credit, recognizes how the game is played, standing up on a chair so the Yeezus-chanting fans don’t crush him in a quest for social media glory. It may seem a bit grandiose, but so are paparazzi, red carpets, and signing autographs. When it comes to tracking famous people, a selfie is the new autograph.

Standing on a stool seems not only reasonable, but downright polite.

Enter to win tickets to see Trio Da Kali at The Villa Victoria Center of the Arts (Newton, MA) on April 10th. END_OF_DOCUMENT_TOKEN_TO_BE_REPLACED

END_OF_DOCUMENT_TOKEN_TO_BE_REPLACED

Enter to win tickets to Rhye at The Paradise on February 28th. END_OF_DOCUMENT_TOKEN_TO_BE_REPLACED

Her new album has been pushed back, but we have Kimbra’s new single for you. END_OF_DOCUMENT_TOKEN_TO_BE_REPLACED

The folk duo returns with a new record this week. END_OF_DOCUMENT_TOKEN_TO_BE_REPLACED

Now that we’re done looking back at 2017, let’s look ahead at 2018. END_OF_DOCUMENT_TOKEN_TO_BE_REPLACED

Our first Song of the Week for 2018. END_OF_DOCUMENT_TOKEN_TO_BE_REPLACED

In a year when so many things were off, the music was right on. END_OF_DOCUMENT_TOKEN_TO_BE_REPLACED